AMAZON has been slammed for selling “barbaric” DIY ear cropping kits for dogs.

The online retailer has been urged to remove the £31 Premium Pitbull Dog Ear Cropping Clamp Guide Tools Kit from its website immediately. 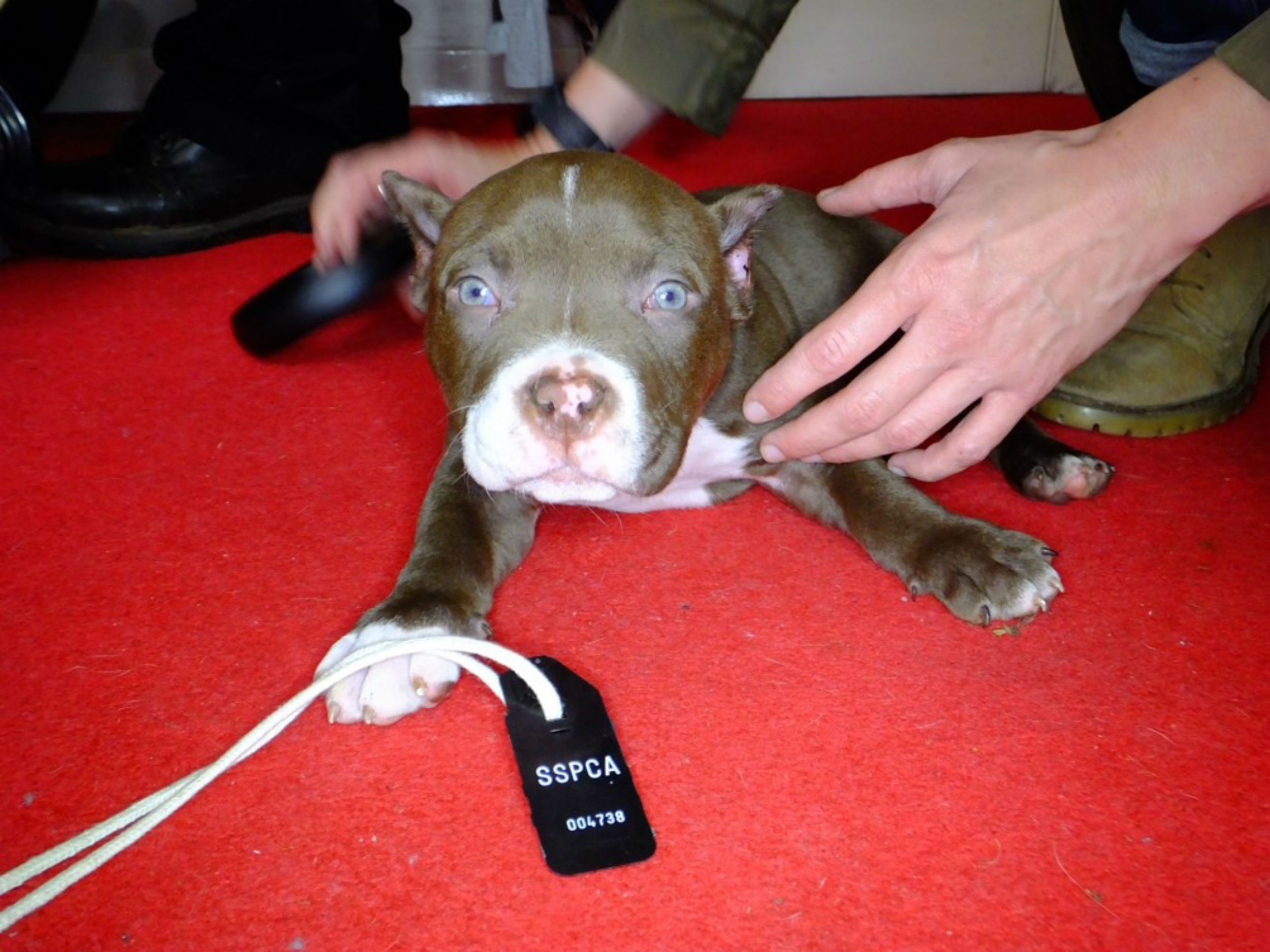 The "cruel" kits come with a scalpel handle, thumb forceps, ten blades and a pair of sharp scissors.

They are currently being sold by US sellers Avon Surgical for £31 and are available to be shipped to Amazon customers worldwide.

Another Amazon seller, DDP Instruments are also selling "Ear cropping scissors" to customers all over the country.

Ear cropping is illegal in the UK under the Animal Welfare Act, unless it is carried out for medical reasons.

Some heartless dog owners, however, have been known to mutilate their pets by cropping their ears to make them appear more ferocious.

Animal campaigners, Focus on Animal Law (FOAL) hit out at Amazon on Twitter last week for selling the “sickening” items.

They wrote: “That sickening feeling when you realise US Amazon are selling and shipping DIY ear cropping kits to the UK!

“It’s time to blow away the smokescreen covering up illegal cropping in the UK by banning the importation of cropped dogs.”

Jill Murray, a student vet nurse from Norham, Northumberland, said she was appalled with Amazon for selling the kits.

She wrote: “After seeing this on a veterinary professional social media about how easy it is to purchase these kits from Amazon and have them shipped to the UK where this is a banned practice, I am appalled that amazon would allow these barbaric products to be sold via them.

“It's cruel and a completely unnecessary practice, it's mutilation! Amazon should be discouraging this and not allowing sales of these 'kits'.

“It's banned in the UK for a reason and a leading company such as Amazon shouldn't be allowing these kits to be sold let alone have them shipped elsewhere.

Social media users were also left furious by the discovery.

One person wrote: “People who do this to a dog shouldn't be allowed anywhere near a dog.”

Another said: “This is barbaric.”

We’re extremely concerned at how easy it is to buy home cropping kits online and we’ll be writing to the retailers selling them to urge them to remove them.

Someone else added: “This is absolutely disgraceful.

“I hope Amazon does what they can to stop allowing these kits into the country.”

A spokesperson for the charity said: “We’re extremely concerned at how easy it is to buy home cropping kits online and we’ll be writing to the retailers selling them to urge them to remove them.

“Ear cropping is a painful process to remove part or all of a dog’s ear for cosmetic reasons.

"It can cause serious and long-term health and behaviour issues for the dog.

"Ear cropping is illegal in the UK but is sadly still legal in other countries, such as parts of Europe and the USA.

“Even in countries where ear cropping is not illegal, we do not believe that these kits should be sold – this is not something anyone should be doing to their dogs at home.”

An Amazon spokesman said: “We are investigating the matter. The items are not available in our .co.uk store.” 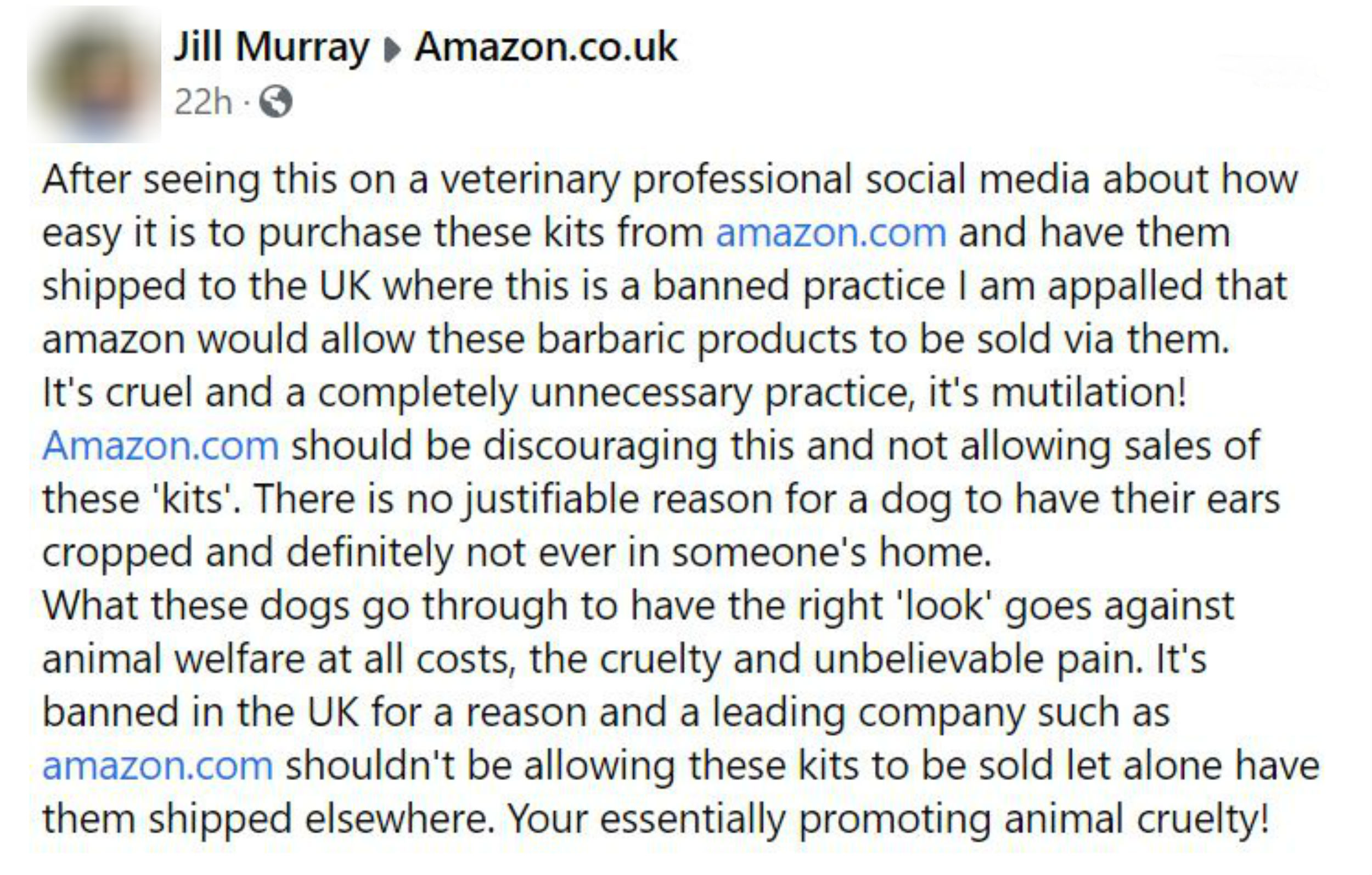