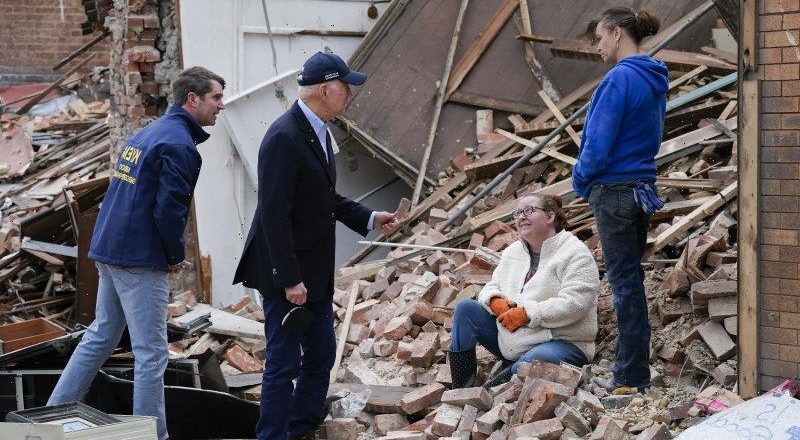 After tornados devastate Trump country, a willingness to set aside politics as Joe Biden visits

Mayfield: Cliff Giambrone most certainly didn’t vote for President Biden and, in fact, was outside the US Capitol protesting the election results on January 6. On the trailer hitch on the back of his van, he usually uses two three-metre poles to fly a flag with a derogatory message aimed at Biden: “Let’s Go Brandon.”

But when the 67-year-old retired construction worker drove from his home in Hamburg, Pennsylvania, to help the recovery effort here, he made a conscious decision to leave that flag at home, bringing an American flag instead. 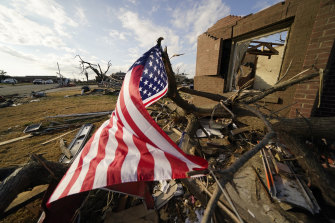 An American flag flies amidst debris of destroyed homes, in the aftermath of tornadoes that tore through the region, in Mayfield, Kentucky.Credit:AP

“Believe me, part of me wants to wave that flag and smile when he looks at it,” he said. “But I don’t want to be that guy.”

Pausing in his search for a lost photo album in the rubble of a home, Giambrone added, “I am political, but there are times you have to set that aside. This is one of those moments. I hope it’s not temporary. I didn’t vote for him, but he’s still my president. I want to support him.”

As Biden arrived in Mayfield on Wednesday (Thursday AEDT), he came to perhaps the most conservative place he has visited as president, the one where open hostility would be most apparent.

He set foot in a county that voted for Donald Trump by nearly a 4-to-1 margin. Many here protested his election, and some still do not accept that he is the rightful president.

But the storms that have transformed parts of western Kentucky suggest that a natural disaster remains one of the few spaces left in American life where, however briefly, many attempt to put their politics aside. 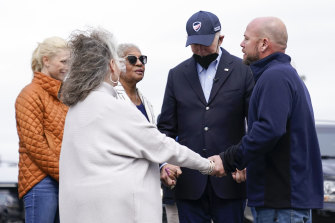 Biden’s response to the tornadoes has won praise from Senate Minority Leader Mitch McConnell, a Republican, who rarely has warm words for the president. Most here say they welcome Biden’s visit, even if they question how effectively he may be able to help them.

“I didn’t vote for the president, and I’m not a fan of his policies,” said Clayton Howe, a 57-year-old lifelong resident who was assessing damage to his downtown building that Biden would walk past an hour later. “But I appreciate him being here. He’s still the president of the United States.”

Biden carried just two of Kentucky’s 120 counties. Thirteen months after the presidential election, signs of the region’s deep support for Trump remain vivid, even amid the rubble.

In Dawson Springs, a town of 2500 where an estimated 75 per cent of the houses were destroyed, tattered Trump flags still hang outside damaged homes. And even as they picked through the debris, emergency personnel were spotted over the weekend wearing “Make America Great Again” hats.

Reporters heard a smattering of “Let’s go, Brandon” shouts as Biden toured the area, but that reaction was relatively muted. More conspicuous were people like Gary Killian, a 55-year-old who stood in a red Trump 2020 cap but nonetheless said he wanted to hear from Biden.

“You can’t help but have compassion for our town,” Killian said. “I just want to see into his eyes. I want to hear what he has to say. And I can’t say I don’t want to hear him just because I’m from the other side of the aisle.” 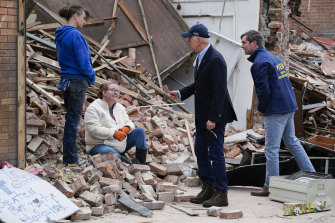 US President Joe Biden and Kentucky Governor Andy Beshear talk to people as they survey storm damage from tornadoes and extreme weather in Mayfield, Kentucky.Credit:AP

Many Mayfield residents appeared to be wrestling this week with their emotions toward Biden, combining a deep-seated disdain and even contempt with a respect for the presidency and a sense that Biden deserved credit for coming. And there was a recognition, grudging for some, that they desperately needed help, or at least money, from the federal government.

Tami Trevarthen, a 58-year-old who works at a deli market and sat outside her brother’s destroyed home, said she approved of Biden’s visit. “He should see what’s going on here. People need help, federal help,” she said.

“He needs to come,” she said, before adding, “But is he coherent?” She recalled that Biden referred to the tornado that swept the area as a hurricane, and she blames him for rising petrol prices and the persistence of COVID.

Her brother, George Long, agreed for the most part with her assessment of Biden, but the Army veteran added that he is still the commander in chief. “I’d be diligent and courteous” if he met Biden, he said. “I’d even call him president. Everything is too political.”

Trevarthen demurred. “I’d be cordial to him,” she allowed. “Let’s see what he can do for people.”

Biden’s empathy has been a trademark of his political career, exhibited when he meets with families dealing with cancer, makes an unexpected call to a staffer’s mother or pauses to listen to someone’s grief. But recent months have also shown the potential strains when a president who is often viewed through a harshly partisan lens seeks to connect with those who disagree with him.

After the US withdrawal from Afghanistan, Biden met with families who had lost loved ones during the chaotic pullout. But some of the relatives greeted him with gritted teeth rather than open arms – blaming him for the troubled military operation, dismissing his comments as scripted and even ridiculing him after the meeting.

Several people in Mayfield said they could drop any impulse to turn the moment into a partisan moment, if Biden did the same. As he arrived, Biden seemed determined to strike a tone of unity.

“There is no red tornadoes and blue tornadoes,” he said. “There’s no red states or blue states when this stuff starts to happen.”

Touring the downtown destruction, Biden unexpectedly approached two women who were clearing rubble from a family-owned business called Debi’s Tax Service. “He said, ’Hi, my name is Joe,” recalled Shawna Driscoll, a 45-year-old lifelong Mayfield resident. “I said, ‘I know who you are!’ ”

The exchange was positive, she said, adding that the encounter was shocking because she had just met the president and because he seemed so normal. Asked if she was a Trump supporter, Driscoll deflected, saying, “I’m a supporter of whoever wants to support us.”

From the outset of his presidency, Biden has seen natural disasters as an opportunity to showcase competence and bipartisan unity. He rapidly approved emergency declarations for areas hit by cold and snow, wildfires and hurricanes.

His responses have won praise from leaders who disagree with him on almost everything else, including Texas Governor Greg Abbott and Florida Governor Ron DeSantis, potential Republican challengers in 2024.

In July, Biden travelled to Surfside, Florida, to comfort families after a condominium collapse, and DeSantis sat next to him. “You know what’s good about this?” Biden asked the local officials around him. “We’re letting the nation know we can cooperate” – here he looked at DeSantis – “when it’s really important.”