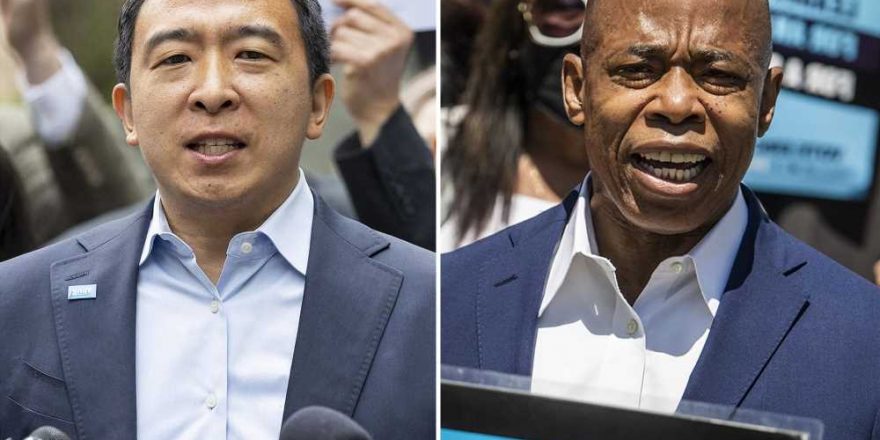 Adams, Yang should take teacher-union hostility as a big compliment

If woke companies really 'care,' let them help where it counts: fighting crime

The United Federation of Teachers is careening off a cliff and inviting us all to watch.

New York City is about to have its first-ever mayoral election with ranked-choice voting, and in an unusual move, the powerful teachers’ union has told its members not to rank frontrunners Andrew Yang or Eric Adams at all.

“Both Andrew Yang and Eric Adams are supported by hedge-fund billionaires and people who don’t care about equity and who don’t have the best interests of New York City’s children at heart,” UFT boss Mike Mulgrew said in a statement about the decision.

Yang and Adams should take the move as the highest possible political compliment. Because what’s clear is that Mulgrew is deathly afraid of one of these candidates winning the election and actually putting kids first — something the UFT has spent the past year thwarting by insisting on teachers’ “right” never to have to see the inside of a classroom again.

Normally, the teachers’ union can be certain that any Democratic politician will bend to its will. After all, Mayor Bill de Blasio didn’t initially earn UFT’s endorsement in the Democratic primary when he first ran for mayor in 2013. That, ahem, distinction went to former Comptroller (and 2009 Democratic nominee) Bill Thompson. When Thompson lost to de Blasio in the primary, however, Mulgrew brokered the concession agreement between the men at UFT headquarters and quickly moved to endorse the winner.

Mulgrew said at the time, “In the end, the decision was made that what was in the best interest of the city was to unite the Democratic Party to make sure that a Democrat becomes the mayor of New York City and not the Republican nominee.”

But things are very different in this race. The UFT achieved a stratospheric level of power in the past year and is clearly loath to let it go. The union forced weak politicians to reject science and harm children in the name of keeping schools closed.

Even in the pandemic’s early days, research told us that kids are at minuscule risk from the coronavirus and transmit it at a lower rate than do adults. And as non-union-dominated districts, and private and parochial schools right here in Gotham, opened their doors, they proved that schools aren’t vectors of transmission compared with other community settings. And yet the UFT’s combination of threats, propaganda and anti-scientific superstition allowed it to override kids’ paramount interest in attending school in person.

Even today, in June 2021, public middle and high schools in the Big Apple are largely open only on a part-time schedule, and then often with the teacher Zooming in from home. The UFT forced an entire city to bend the knee to its craven bosses and members, and most New York politicians supported it.

So why would the UFT want to surrender any of that control? The union thinks it has found its next patsy in the form of city Comptroller Scott Stringer, and the bosses have to make sure they can drag him across the finish line.

Even as the UFT has amassed power, it has lost the support of parents, who finally had their eyes opened to the inner workings of the highly politicized union. Parents saw that the union put kids dead last. The union couldn’t care one whit for the academic and emotional wellbeing of kids. All it cared about was getting whatever bizarre concession our dim politicians would grant. Families have fled. As The Post reported, internal documents show enrollment has dropped to 890,000 from 1 million a decade ago. The DOE went ballistic, saying the number was actually more than a million — if you count charter school students, the only time it’s made that argument.

That the union has decided it likely won’t be getting concessions from Adams or Yang is a plus in favor of both men. The Adams and Yang campaigns should blare the union’s hostility to the two men from now until Election Day. Maybe it will persuade the families who went to private schools or out of state to come back — if they know there is a mayor who will fight for them and not the union.

The UFT will have to work with the eventual mayor, but the mayor doesn’t ultimately need the union. If it is Yang or Adams, may he answer the union’s animus with righteous rage — and squelch the UFT’s power. New York City kids deserve so much better than the broken school system the union forces on them. A Mayor Adams or Mayor Yang could do a lot to fix it by excluding Mulgrew and his crew from future conversations.