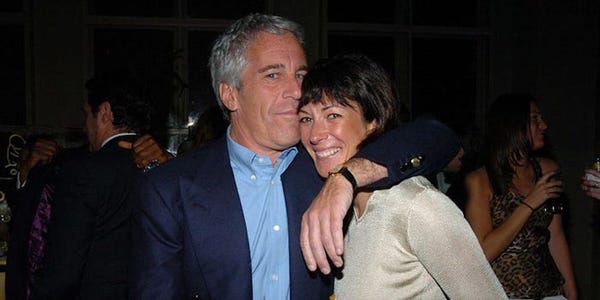 An appeals court in New York released 418 pages of deposition from Ghislaine Maxwell on Thursday, and during the seven hours of interviews she dodged multiple questions about Jeffrey Epstein, Prince Andrew, Bill Clinton.

The 2016 deposition was originally taken as part of a 2015 civil case brought by Virginia Roberts Giuffre, who accused Maxwell and Epstein of underage sex trafficking.

Maxwell, who is currently in jail awaiting trial on criminal charges accusing her of trafficking girls as young as 14 for Epstein, avoided dozens of questions throughout the deposition, answering with "I don't recall" and "I refuse to answer" or asked to "move on."

The deposition features mentions of Chelsea Clinton's wedding, Epstein's flight log, a puppet Prince Andrew has been accused of groping victims with, and more.

Here are some of the highlights:

Maxwell was arrested in July and is being held without bail at Brooklyn's Metropolitan Detention Center.

Ahead of the release of the deposition, Maxwell's lawyers had argued would "lead to a violation" of their client's "due process right to a fair trial." An appeals judge said Maxwell's lawyers' argument lacked merit and that the public had the right to read her deposition.'

Giuffre's lawyers filed a response to Maxwell's deposition less than a month after the testimony was taken, in which they argued that Maxwell should be interviewed again.

"Contrary to Defendant's assertions, Ms. Giuffre is not engaged in a 'fishing expedition' but rather seeks to ask highly-focused questions specifically relevant to this case," her lawyers said. At trial, Ms. Giuffre intends to strongly disprove Defendant's false assertions and to demonstrate that Defendant recruited Ms. Giuffre to be involved in massages of a sexual nature with Epstein."