Home » World News » 25,000 Syrians to be released from camp for IS supporters

25,000 Syrians to be released from camp for IS supporters

Beirut: Up to 25,000 Syrians are to be released from a detention camp for Islamic State affiliates and their families in a "general amnesty" aimed at relieving overcrowding and appeasing local Arab communities.

All Syrian nationals – mostly women and children – will be freed from Al-Hawl camp in Hassakeh province, Ilham Ehmed, the co-chairman of the Syrian Democratic Council told a public meeting in Raqqa on Saturday. 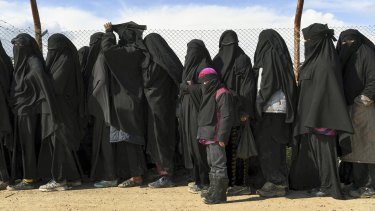 Foreign ISIS wives and children in a Syrian camp in 2019.Credit:Kate Geraghty

The camp is dominated by the most extreme supporters of Islamic State of Iraq and the Levant, with insufficient guards to provide internal security. Residents often complain about insufficient food, a lack of healthcare and have reported tent-burnings and killings. Between December 2018 and July this year, 656 people died in the camp, mostly children under five, according to the International Rescue Committee.

Ehmed said: "Hawl Camp is a heavy burden on the shoulders of the autonomous administration of north-east Syria [AANES]. The AANES is not obliged to pay exorbitant sums to provide these people with food and other things, let alone [deal with] problems that arise daily, including assassinations, rape, and so on."

The detention of Syrian women and children in Al Hawl has fuelled resentment among Arab communities against the Kurdish-led authorities who have previously released hundreds of male Syrian IS affiliates said to have "no blood on their hands" and sent them back to their communities.

Ehmed said the remaining 30,000 Iraqis and more than 10,000 other foreigners at Al Hawl camp will be dealt with "through a ruling yet to be released".