Home » Politics » 'You Think, "How Is This Possible?"': Lawmaker and Her Son Open Up About His Harrowing Addiction and Recovery 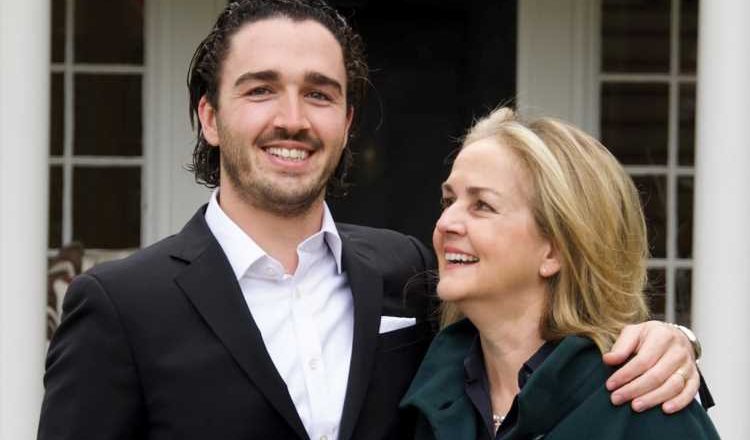 'You Think, "How Is This Possible?"': Lawmaker and Her Son Open Up About His Harrowing Addiction and Recovery Eight years ago, Madeleine Dean was devastated when she learned that her son Harry Cunnane had repeatedly snuck out of the house with his dad's ATM card to steal a total of $4,300 from their checking account — all in order to feed his drug addiction.

Dean was just about to launch her first run for state office. (She joined the Pennsylvania House in 2012 before being elected to the U.S. House in 2018.)

Even in light of her son's other personal struggles, it came as a shock.

"It's a shattering of trust. You think, 'How is this possible?' This is a child who knows we will give him anything," the congresswoman, 61, tells PEOPLE in a joint interview with Cunnane, 30, about their new book, Under Our Roof: A Son's Battle for Recovery, a Mother's Battle for Her Son, which was published on Tuesday.

(Their children's book, You Are Always Loved: A Story of Hope, was released concurrently.)

"PJ's wallet would be at the back of our kitchen, he would put it there every night, with the debit card in it. We all knew everybody's code," recalls Dean, who shares Cunnane and her two other sons, Patrick, 32, and 27-year-old Alex, with husband Patrick "PJ" Cunnane, 62.

"To take a look at those bank statements and see night after night, [Harry] sneaking out, taking a few hundred dollars, coming back and slipping it back. It was the saddest moment," Dean says now. "Just a shattering of trust — a total misunderstanding of our love."

Cunnane, who had been struggling with addiction since he was in high school, knew a confrontation was coming. But he'd run out of lies to tell. "I tried for days to come up with an excuse, a reason, a justification. I had nothing left," he tells PEOPLE. "I was so broken, so hopeless, so self-loathing. At that point in time, there was nothing left to give. I wasn't necessarily ready to come out and be fully honest [about the extent of his addiction], but I just felt like I couldn't tell another lie. I was too broken."

Cunnane, then a new dad to daughter Aubrey, may have run out of hope. But his parents weren't willing to give up on him.

According to Under Our Roof, a few days after learning about the stolen money Dean and her husband sat their son down and confronted him with the bank statements.

Cunnane admitted to using drugs and had a one-word response when his parents asked if he was ready to get help:

With his parents' assistance, Cunnane was able to attend a treatment center for four months. And he has maintained his sobriety since then. This experience combined with his efforts to help others in recovery has, he says, proven that his life can still be filled with joy and purpose.

Cunnane is now the resource director for the same treatment center that helped him years ago. He shares a 1-year-old son, Sawyer, with wife Juliet, whom he married in November 2018.

In Under Our Roof, mother and son recount some of Cunnane's most terrifying moments, such as being held up at gun point during a home invasion, as well as the pressure his drug use placed on his parents' marriage as they sought to save him and his physical and emotional deterioration.

While Dean and Cunnane want to acknowledge the tremendous cost of addiction, they also hope to combat misconceptions and show that recovery is possible.

"A lot of families have suffered great losses," Dean says of the opioid crisis that has affected millions of Americans. "We write it for them to say addiction really robs people of so much, but there is hope." ‘Love All Around You’

Cunnane wrote the memoir so that readers will know that addiction is "treatable."

"Where my life has come to today, just a little more than eight years later, is far exceeding anything that I envisioned when I walked into treatment in October of 2012," he says. "Because my outlook then was, 'Even if I can stop using drugs, my life is going to be this miserable mess.' But through recovery, it's not. It's been amazing."

He and Dean recognize the various privileges — like his parents' financial support — that helped him reach sobriety. (In Under Our Roof, Cunnane writes of the numerous times he wasn't arrested after he was detained by police — in part, he feels, because he is white.)

"If you have somebody struggling or if you're struggling, find a way of reaching out, because there's love all around you," Dean continues. "There are people who want to help you."

Dean and Cunnane's approach to writing Under Our Roof was unusual: At the beginning of the process, they followed one outline but wrote their accounts separately so they didn't "influence" each other's memories of specific events.

It was a "terrific experience," Dean says. But it was also painful.

"For me, I learned a lot … There were a couple of chapters that I remember just struggling to get through, that Harry had written," Dean says. "I knew we had suffered a terrible time in our family's life and a time in Harry's health, but to read the life he was really living when he was deep in addiction was very difficult for me."

It had taken time for Dean to learn the extent of her son's drug use. For a while, she thought he had just smoked pot. During Cunnane's teenage years, he and his mom were always in conflict as he sought to hide the truth from his parents.

Those trying times seemed to be a vast departure from Cunnane's early childhood, his mom explains. "Harry is so charismatic, and this was true when he was a baby. He just lit up when he came into a room … He was always surrounded by gangs of kids. He was beaming and bouncing," Dean remembers. "For me and for my husband, we just thought, 'With Harry, the sky's the limit.' And that was part of the extraordinary struggle of thinking — 'all these gifts, this kid has everything, every gift you could possibly want. And what's going wrong?' "

That's not how it felt to Cunnane.

From a young age, he says, it was like "everybody had been given this manual of how to go about your life, and I felt like I was missing it, that something wasn't there."

"And that's what I think really lended to exploring drugs and alcohol … It filled that void for me," he says. All of those fears, anxieties and worries were just completely out the window."

The congresswoman writes in Under Our Roof how she knew something was wrong when Cunnane's demeanor and physical appearance changed.

"I feel like there is a fire in this house and nobody knows it," she kept saying. "I'm the only one." Her husband had a different approach, which became its own source of tension.

"He was more forgiving and more, 'Mad, he'll be okay. We'll see this through,' " she says. (Dean explains that after they learned of Cunnane's addiction, she and PJ were in sync and determined to help him.)

The pressure on her life and marriage, especially when she decided to run for office, was immense.

"It was chaotic … It was multitasking on steroids, and not in a very comfortable way," she says. "But I think what it shows about me is when I get my sights on something, whether it's trying to figure out what's going wrong with my son, or I really want to get into public service, I was driven. And I didn't [go down] either of those paths very pretty, but it just felt like an urgency." For Cunnane, his addiction began to spiral out of control after he tried cocaine in high school. His drug use and dangerous behaviors continued to intensify through graduation, during his time a La Salle University and even when he and his pregnant girlfriend moved into his parents' house.

Before he dropped out of college, Harry got into fights and was accused of stealing and slashing people's tires, according to Under Our Roof.

Dean was a member of the English Department at La Salle for 10 years before she decided to enter politics. While Harry was a student, she sought to defend her son, even though he hadn't told her the full story.

It was during Harry's time at La Salle that Dean got a call from him late one night, explaining he'd been robbed. While she wouldn't know the full extent of the danger until she read Harry's part of their memoir, Dean says she was "scared" and "angry" that her son's life had been in danger.

Harry's initial reaction was the opposite of his mother's. "I just wrote it off because it was part of the lifestyle," he says.

"With the home invasion, it was not that surprising. The people that I had surrounded myself with and the things that I was seeing on a daily basis, it wasn't that surprising," Harry says. "For me, the scariest moment of being held at gunpoint in that moment was I was intoxicated when it happened. I was high on Percocet. I just remember feeling like I knew what they wanted. They wanted money, they wanted drugs. I felt like, at least, they weren't there to kill me."

But then Cunnane "looked into the one guy's eyes, and I could see how high he was."

Then he became afraid. Cunnane remembers thinking the man "might not want to, but because he's high, something might go wrong and he might actually pull the trigger."

As frightening as the robbery was, Cunnane says the hardest moments to revisit in the book happened around the birth of his daughter, Aubrey, now 9.

In Under Our Roof, he writes about getting sober before she was born only to take a Percocet the next day. (Harry and his mom wrote You Are Always Loved for Aubrey and other children who have witnessed a loved one struggling with addiction.)

"The hardest moments to revisit were, at the end of my using, my time with my daughter," Harry tells PEOPLE. "I've processed a lot of this before writing the book, but going back to some of those emotions and just the real despair and hopelessness that I felt, and trying to relive that by putting it down in words — that was harder than what appeared to be the chaotic moments in the story." Now sober for almost a decade, Harry wants to share what he's learned about addiction and trust.

"Somebody told me early on, 'Trust is lost in buckets and gained in drops,' " he says. "Over time and [with the] consistency of my actions, by doing what I say I'm going to do — that was the only way. That's what I can continue to do to try to regain and rebuild and reestablish a new trust, because everything changed in that moment, when that secret was exposed."

Since that life-changing confrontation, Harry's frayed bond with his family has strengthened.

"It took a long time, but I was so relieved to see that you can rebuild trust," Dean says. "In fact, through this process — through Harry's recovery and what we've learned from it, and also the process of writing this book — I have greater trust in Harry now than ever before."

Under Our Roof and You Are Always Loved are on sale now.