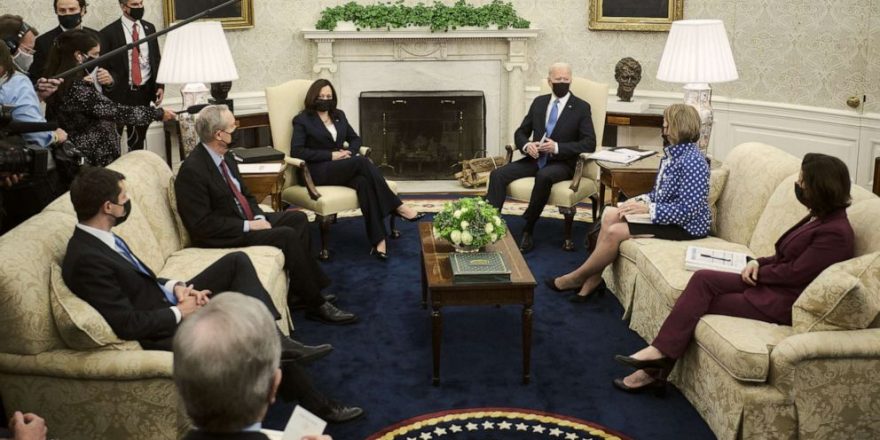 The TAKE with Rick Klein

One of the most radical notions President Joe Biden put forward as a candidate was that he could get Republicans to work with him on key parts of his agenda.

It hasn’t happened yet. And if it is going to happen for him, the next few weeks might be the last best chance for it.

This past week set the uncertain stage. The progressive wing of the Democratic Party flexed some muscle on foreign policy and on policing tactics, signaling impatience on Biden’s left that the White House has always known was there.

Having 35 House Republicans break from leadership and Trump might be a positive sign for Biden — but their ideological makeup makes that quite a bit more complicated.

For all that, Senate Republicans are expecting a White House counter-proposal on infrastructure on Friday, and bipartisan and bicameral talks on police reforms are slated to stretch into next week. Informal Memorial Day deadlines for both sets of issues can slide, though not indefinitely.

Broadly speaking, this week revealed glimpses of a Biden approach to the presidency that might be encapsulated best by what White House aides described as “quiet diplomacy.”

The question now is whether and how that plays in an increasingly noisy political world.

The RUNDOWN with Averi Harper

The president might have bowed to pressure from progressives in terms of calling for a de-escalation in violence in Israeli and Palestinian territories, but after news of a cease-fire, the crux of his initial stance has stayed the same.

“The United States fully supports Israel’s right to defend itself,” Biden said during remarks on the cease-fire between Hamas and Israeli forces Thursday evening.

Biden made a point to mention the United States’ commitment to providing defense aid to Israel.

“I assured (Israeli Prime Minister Benjamin Netanyahu) of my full support to replenish Israel’s Iron Dome system to ensure its defenses and security in the future,” said Biden.

It comes after a joint resolution from progressives in Congress, including Sen. Bernie Sanders, I-Vt., opposing the sale of $735 million worth of weapons to Israel.

Biden seemingly made an appeal to progressives on the humanitarian front.

“Palestinians and Israelis equally deserve to live safely and securely and to enjoy equal measures of freedom, prosperity and democracy,” said Biden.

But it is not yet clear if Biden’s statements will suffice for lawmakers who have been critical of his handling of the issue.

The TIP with Alisa Wiersema

Biden heads to Cleveland Thursday to deliver remarks on the economy against a backdrop of jockeying ahead of the 2022 Senate campaign.

His visit to Ohio, which he lost by nearly 10 points, is happening while a slew of Republicans attempt to curry favor from Trump in order to keep the state under GOP control. Although several hopefuls visited Trump personally, an endorsement is likely a long way off and more could throw their hats into the ring.

Among the expected contenders is author J.D. Vance, who launched an exploratory bid last week and has been making the rounds on conservative media outlets. He’s already been targeted for his past criticisms of Trump in a political ad favoring former state treasurer and ardent Trump-backer, Josh Mandel.

Biden endorsed anyone either, but so far, the Democratic field features only one high-profile contender, Rep. Tim Ryan, whose congressional district may be affected by redistricting. Ryan on Wednesday lashed out at Republicans opposing the bipartisan commission to address the Jan. 6 insurrection: “We need two political parties in this country that are living in reality and you ain’t one of them.”

Former President Donald Trump may have left office in disgrace, but the four months since then have seen his influence grow. Just as this week saw the likely demise of the commission that would scrutinize both Trump’s role in instigating violence at the U.S. Capitol on Jan. 6 and in the slow federal response to quelling it, last week saw the House GOP cast Rep. Liz Cheney, R-Wyo., out of leadership for her insistence on telling the truth to combat Trump’s election lies. And it’s not just in the halls of Congress where the consequences of Trump’s dominance are evident. Dozens of states have enacted or are close to finalizing voting restrictions inspired, at least in part, by Trump’s “big lie” about 2020.

ABC News’ “Start Here” Podcast. Friday morning’s episode features ABC News’ Matt Gutman — he joins us from Israel, where a cease-fire is now in effect. Then, Lt. Jesse Salame from the San Antonio Police Department joins the show to discuss how his unit is working to better reflect the community it serves. And ABC News Royals producer Zoe Magee explains why the BBC is apologizing to the royal family for an interview it did with the late Princess Diana. http://apple.co/2HPocUL

WHAT YOU NEED TO KNOW THIS WEEKEND

Download the ABC News app and select “The Note” as an item of interest to receive the day’s sharpest political analysis.

The Note is a daily ABC News feature that highlights the day’s top stories in politics. Please check back Monday for the latest.