During a Monday morning interview on “Fox & Friends,” White House press secretary Kayleigh McEnany defended Donald Trump’s decision to share a video depicting one of his supporters shouting “white power,” a well-known white supremacist slogan. The president retweeted the video from his Twitter account on Sunday and later deleted it amid widespread backlash online.

On Sunday, the White House said Trump saw “tremendous enthusiasm from his many supporters” in the video and claimed he “did not hear” the slogan despite it being yelled loudly within the video’s first 10 seconds.

McEnany repeated the claim on Monday and, despite Trump having deleted the tweet, said “his point in tweeting out that video was to stand with his supporters who are oftentimes demonized.”

The video, first tweeted from an anonymous account, showed a man driving a golf cart fitted with Trump paraphernalia and shouting the slogan during a verbal exchange with anti-Trump protesters. The Twitter user wrote that the altercation took place in The Villages, a community for seniors in Florida.

In his now-deleted retweet, Trump thanked the “great people of The Villages,” adding, “The Radical Left Do Nothing Democrats will Fall in the Fall.” 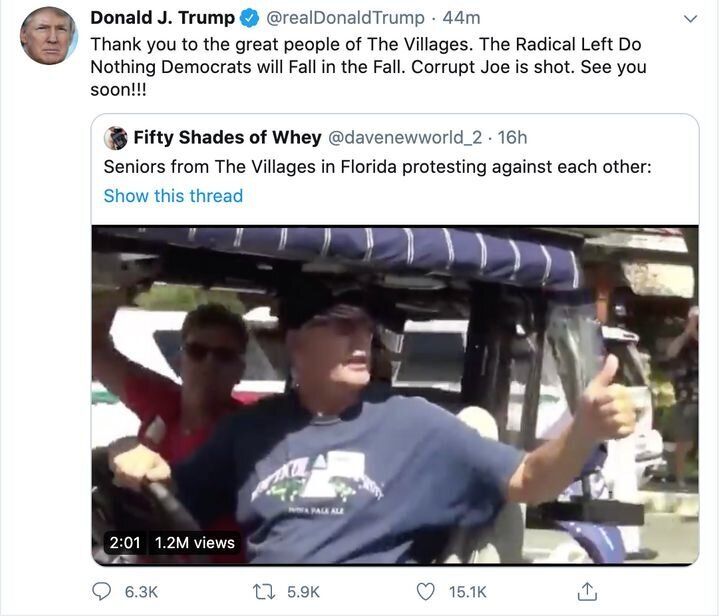 Former Vice President Joe Biden, Trump’s presumptive opponent in the November election, was among many who noted the president’s use of the phrase “great people” in his Sunday tweet was similar to how he described white supremacists who held a deadly rally in Charlottesville, Virginia, in 2017.

Democrats weren’t the only ones who criticized Trump’s tweet on Sunday. South Carolina Sen. Tim Scott, the lone Black Republican in the Senate who is routinely tapped to sell the Trump administration’s policies to Black people, offered on Sunday what, for him, could be considered as forceful a condemnation as any.

“There is no question he should not have retweeted it and he should just take it down,” Scott told CNN in an interview.