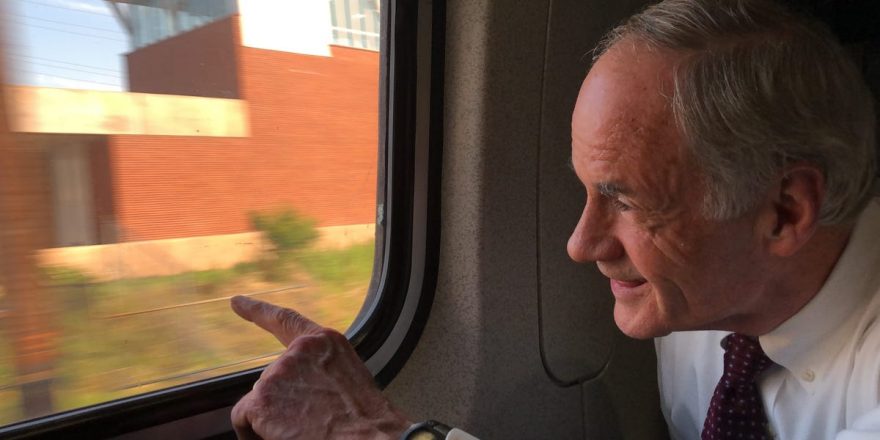 Sen. Tom Carper says he’ll soon have an Amtrak train station in Delaware named after him, just like President Joe Biden. Except that it’s smaller.

You might even miss it if you blink, he explained, so he counted down the seconds as we approached the “cute little” new station in Newark, Delaware, via Amtrak. “There’s my train station!” he exclaimed, pointing out the window, laughing, and clapping as it whizzed by in all of two seconds.

About 12 miles north is the Wilmington station, and Carper recalled working to secure grants to renovate it a decade ago, on its 100th anniversary. “Then they named it after Joe Biden, and my staff was so ticked off. The nerve!”

The envy schtick is nothing new. Carper has long made these jokes about living in the shadow of Biden, who represented Delaware in the Senate for 36 years. He cracked so many of them, this reporter felt compelled to write for The News Journal in Wilmington about him milking his new “senior senator” title for laughs when Biden finally left the Senate to become vice president. He keeps the story framed in his office.

Carper, 74, brushes off questions about any rivalry with Biden, 78. They’ve known each other about 47 years, working together as Delaware Democrats. Carper said Biden is “like a brother” who has “always been there for me.” And Biden gave Carper the first shoutout during his November 2020 electoral victory speech, calling him “my buddy” and causing Carper’s phone to blow up with calls from people who wanted to work for the administration. They still talk every couple of weeks, though sometimes it’s more frequent than that.

Biden and Carper are different politicians in style, interests, and some priorities. Still, they share not only big goals on infrastructure but also a devotion to Amtrak after commuting from Delaware to Washington almost daily for decades. And, it turns out, Carper is well positioned to help his friend, the president, as he tries to push a massive $1.7 trillion infrastructure package through the evenly divided Senate.

Carper chairs the Senate Environment and Public Works Committee, which has jurisdiction over roads, highways, bridges, water, and climate change. A former Amtrak board member, Carper also expects to serve as a point person on goals he shares with Biden for improving the nation’s premier rail service, even though it doesn’t fall under his committee.

Could it be Carper’s turn to shine with Amtrak? An employee at the DC station recently told Carper, “you’re our man, now,” he said, now that Biden is president. “I said, I’ve been waiting for this moment,” he said, laughing. “I love Amtrak, and it turns out they love me.” 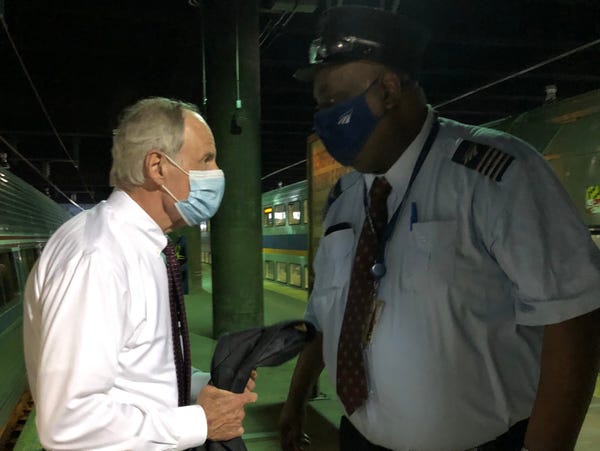 I traveled recently with Carper from DC to Wilmington on the well-worn tracks he and Biden traversed for decades to see what memories it would trigger and what light it would shed on his long relationship with the 46th president.

Biden, known as “Amtrak Joe,” developed his love of Amtrak and its employees as a senator during thousands of round trips that helped him see his two sons every night after the death of his first wife and baby daughter. “Amtrak became my family,” he told a Philadelphia audience recently on Amtrak’s 50th anniversary.

For Carper, the fascination with train travel began at a young age during an impromptu ride with his grandfather, who worked for a railroad. Before landing in politics, he hoped to work for Amtrak, but he said they weren’t hiring.

When Biden would run late for his train, conductors helped him out, The Associated Press has reported. “There was always some mechanical difficulty that lasted for a minute or two,” Biden said in 2009, before his inauguration as vice president.

On this particular day, Carper boarded the 5:05 p.m. train from DC to Wilmington with just a few minutes to spare, skating in after the last call. He doesn’t think they’ve ever held the train for him, even when he was an Amtrak board member in the 1990s. “No respect,” he joked, quickly adding that it’s important for trains to run on time.

Carper missed his train to DC on St. Patrick’s Day and had to Zoom into a congressional hearing while riding the next one he could catch. The reason he was late: Biden’s presidential motorcade snarled Wilmington traffic.

Unlike Biden, Carper has never run for president and he’s never been a frequent guest on Sunday talk shows. He’s not the kind of guy who grabs much national attention, though media outlets had some fun last year with a triple F-bomb he dropped on a hot mic during a virtual Senate hearing. (We think Biden would say this is not a big f—ing deal.)

Carper is typically so soft-spoken, it’s hard to hear him above the whirring sound of a train. He is also prone to deadpanning dad jokes. “Do you have your ticket?” he asked one woman, stopping her on the Wilmington platform. “Just kidding.”

He and Biden rode the train together “not a lot, but plenty.” Carper sometimes takes the quiet car to get work done, he said.

Biden, on the other hand — “he’s a guy who likes to engage in conversation,” Carper said with a laugh.

The most memorable moments traveling with Biden, he said, were actually when there were no available trains. A staffer would drive them home as they listened to classic rock. “He and I both like a guy named Roy Orbison,” he said.

We sat at a table in a largely empty Northeast Regional train car. The ride is pleasant, but it could be quicker and more comfortable, Carper said. “If they just could upgrade this tunnel, it would probably knock 10 minutes off the travel,” he said. He wants to upgrade the Northeast Corridor that runs from Boston to DC, possibly extending it south to Richmond, Virginia.

He also likes Biden’s plan to connect more cities via rail and said he’ll be arguing for it in the Senate.

Carper has long worried about the impact of climate change on low-lying Delaware. He urged Transportation Secretary Pete Buttigieg and White House senior staff to prioritize efforts to curb its effects in their infrastructure negotiations with Republicans, led by his committee’s GOP counterpart Sen. Shelley Moore Capito of West Virginia.

“I said ‘You’ve got to be strong. We have to be on the same page,'” Carper said.

Capito earlier this week said Republicans and the White House are still far apart on their infrastructure plans. But she and Carper forged ahead on a separate bipartisan surface-transportation bill that’s considered foundational to the larger infrastructure package. Their committee unanimously passed the legislation on Wednesday.

In an interview, Capito said she doesn’t feel like she’s negotiating with the White House when she works with Carper, even though she knows he doesn’t want to run afoul of the president.

“I think he knows where he wanted to go with this,” she told Insider. “I’m sure he’s checking with them, but I don’t think it’s like, ‘Oh, let me get back to you.'”

It’s positive that they reached an agreement on the “basic” highway bill, but that’s the easy part, said former Sen. Barbara Boxer, a California Democrat who previously chaired the Environment and Public Works committee. “The hard part is, how do you build on that? And I hope that Tom is successful in persuading the Republicans on the committee they need to go beyond this,” said Boxer, now a cochair at the consulting firm Mercury Public Affairs. 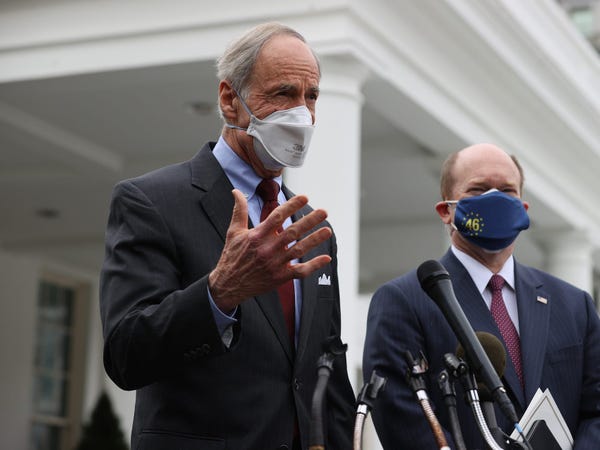 During his five House terms and four Senate terms, Carper has built a reputation as a centrist who, like Biden, enjoys working across the aisle. But his positions haven’t always aligned with Biden’s priorities in the White House. For example, Carper and Coons were among eight Democratic caucus members who voted against adding a $15 minimum wage to Biden’s COVID-19 rescue package.

Carper has long supported user fees for roads, highways and bridges, and the White House says such a plan would “violate” Biden’s pledge to not raise taxes on those making less than $400,000 a year.

Carper and Biden have different backgrounds, priorities, and interests, Coons said. Carper spent eight years as Delaware’s governor from 1993 to 2001, and governors “have a different worldview than senators.”

“The joke was that Carper would go to a ribbon cutting for a gas station, and Biden was busy with peace in the Middle East and Iran and North Korea,” Coons said. But he added that Carper’s focus on his state’s economic development complemented Biden’s national and global work on the Senate Judiciary and Foreign Relations committees.

Coons smiled, thinking back to his February 3 meeting with Carper and Biden in the Oval Office. It was just the three of them, sitting on the couches, “and Joe’s like, ‘Hey, what do you think?'”

They studied the big painting of former President Franklin Roosevelt across from the Resolute Desk, and Biden chatted about how he had his brother move this and that. The portrait of former President Andrew Jackson that Donald Trump had hanging in the country’s most famous office had also been removed.

Their meeting came during the push for Biden’s COVID-19 rescue plan, and it showcased the different approaches of Biden and Carper, who arrived with charts, graphs ,and numbers on unemployment and individual checks.

“Biden just reaches over, takes both our hands and says, ‘Close your eyes for a second. I just want you to picture who we’re fighting for, OK?'”

The president told them to picture a middle-class family with two kids in school. “Help me figure out how we help them the most, and then let’s worry about the numbers,” Coons said Biden told them. 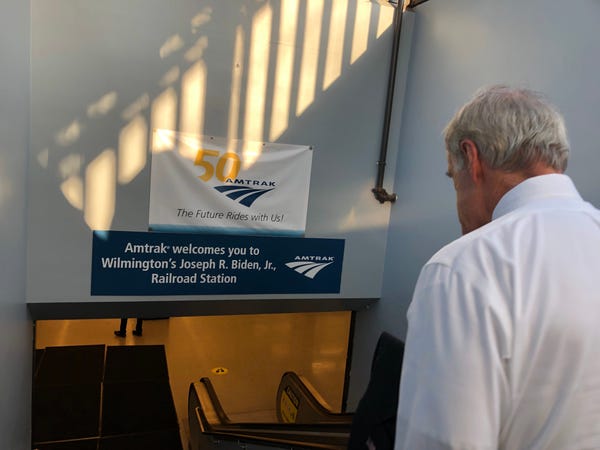 ‘Tell Joe Biden we love him’

At the Amtrak station in Wilmington, Carper reflected on how he has stepped off the train and onto the same platform since 1982.

Biden’s frequent return trips to Delaware have drawn media attention. But Carper gets why Biden likes it so much. It’s home, he said.

From the platform, Carper pointed to the spot across the tracks at the train station where he and Delaware Gov. John Carney recorded a video reading the votes that gave Biden the nomination during last summer’s virtual Democratic National Convention. “They made us say the same line like five lines, like 50 times,” he said.

Carper walked beneath the sign: “Joseph R. Biden, Jr., Railroad Station.” Will his station in Newark have a sign?

“Of course,” he said, but he added that it will be bigger.

He stopped at the ticket counter and asked the attendants if they sold train tickets to Iowa.

They chatted about how Amtrak is getting busier, and Carper said, “We’re on our way back. It’s a great thing.”

As he left, “Tell Joe Biden we love him,” the ticket counter attendant said.

“He loves you too,” Carper said.