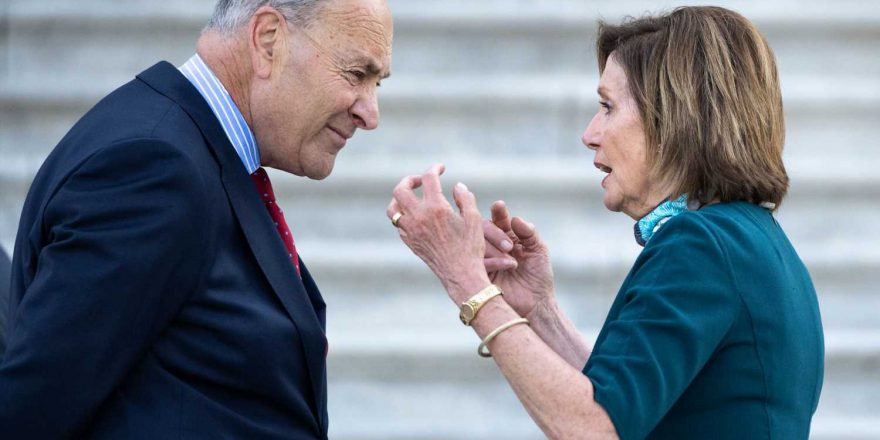 The U.S. stock market is on track to post its worst day in months. And U.S. politics are in part to blame.

As the Dow Jones Industrial Average fell 614 points on Monday — its worst day since July — and the S&P 500 shedding 1.7%, strategists say gridlock on Capitol Hill is starting to send shutters through the market.

The S&P 500 on Monday notched its worst session since May.

"Much of this is short-term risk and headline risk, but the framework of Washington policy is shifting to more risk after 18 months of unlimited fiscal and monetary policy," he wrote. "Consensus now believes that the debt ceiling will be raised in the second half of October, meaning a last-minute move, and another month of talk of debt ceiling breaches and prioritization of government spending if the debt ceiling is not lifted."

If Congress fails to suspend or raise the borrowing limit before the so-called drop-dead date, the U.S. government will default for the first time. The Treasury Department doesn't have a precise "drop-dead" date right now, but estimates that it's likely some point in October.

House Democrats plan to hold a vote this week on a piece of legislation that would suspend the limit and fund the government for a matter of months beyond the close of the fiscal year when it ends Sept. 30.

Republicans have said they won't help Democrats lift the borrowing limit as a sort-of protest over the trillions of dollars in new spending the Biden administration has proposed.

"This week, the House of Representatives will pass legislation to fund the government through December of this year to avoid a needless government shutdown that would harm American families and our economic recovery before the September 30th deadline," House Speaker Nancy Pelosi, D-Calif., said in press release Monday.

"The legislation to avoid a government shutdown will also include a suspension of the debt limit through December 2022 to once again meet our obligations and protect the full faith and credit of the United States," she added. "The American people expect our Republican colleagues to live up to their responsibilities and make good on the debts they proudly helped incur in the December 2020 '908' COVID package that helped American families and small businesses reeling from the COVID crisis."

The bigger hurdle is likely the Senate, where lawmakers will need to muster 60 votes to pass such a bill that isn't tied to the separate reconciliation legislation.

Raising or suspending the debt ceiling does not authorize additional fiscal spending. Instead, raising the ceiling is more like increasing the country's credit card limit.

Importantly, even if the Biden administration hadn't authorized any spending — even if Congress had passed zero bills in 2021 — lawmakers would still need to lift the ceiling to pay for legislation passed in prior years.

"The U.S. has never defaulted. Not once. Doing so would likely precipitate a historic financial crisis that would compound the damage of the continuing public health emergency," Treasury Secretary Janet Yellen wrote in an op-ed over the weekend.

"Default could trigger a spike in interest rates, a steep drop in stock prices and other financial turmoil," she added. "Our current economic recovery would reverse into recession, with billions of dollars of growth and millions of jobs lost."

Even if lawmakers ultimately avoid a technical default, a lengthy last-minute fight over the debt limit could lead to another downgrade of the U.S. debt rating, akin to what happened in 2011. The mere specter of default led Standard & Poor to downgrade U.S. sovereign credit, which in turned whacked demand for Treasurys and pushed yields up.

But investors fears aren't exclusive to the borrowing limit.

Instead, the added angst over the debt ceiling adds to growing fears about the delta variant of Covid-19, pesky inflation and the end of easy Federal Reserve policies, according to Art Hogan, chief market strategist at National Securities.

Hogan explained that markets are keeping a close eye on the bipartisan effort to pass $1 trillion in infrastructure spending and Democrats' effort to add on another $3.5 trillion to revolutionize the country's social safety net.

But, he said, it's not necessarily surprising to see the $3.5 trillion bill curtailed as it makes its way through Congress.

"It feels like consensus is that we will get some but not all of the spending proposals passed," Hogan wrote in an email. It's likely we see some "increased taxes but certainly not in an order of magnitude that is currently being discussed."

September is often a choppy month for markets, Hogan added, and 2021 is proving no exception.

"When we think about things that are driving markets, it certainly feels like we have turned from complacent to concerned about a plethora of potential headwinds," he wrote. "None of the concerns that market participants have in the here and now are necessarily new, but are being viewed through the lens of what historically has been a rough month for markets in general, as such they seem to be hitting a crescendo."