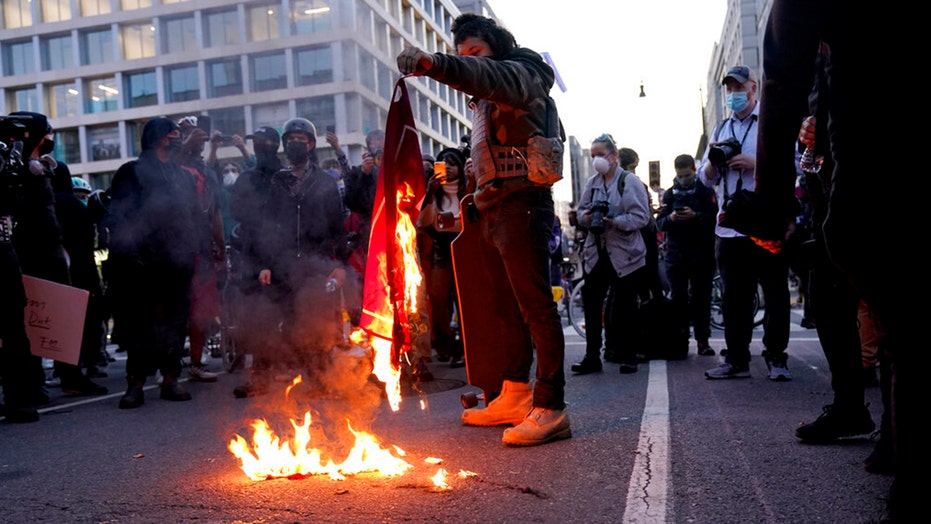 They turned out in opposition to pro-Trump groups rallying to protest the results of the election, which show a Joe Biden victory. The president himself even visited the demonstration with his motorcade.

Earlier in the day, the march was largely peaceful. But as the sun went down, snippets of scenes shared on Twitter showed chaos had overtaken in areas of the nation’s capital.

Anti-Trump demonstrators allegedly hurled eggs at Trump supporters — or stole signs, hats and banners, and lit them on fire. Videos show them shouting at families, sucker-punching people in the street and even harassing an elderly woman carrying a Trump flag.

City police said they’d made at least 10 arrests – at least three of which involved assaults – but a total count wasn’t expected until Sunday morning. They closed off streets and part of Washington's downtown, allready home to boarded up stores and offices. 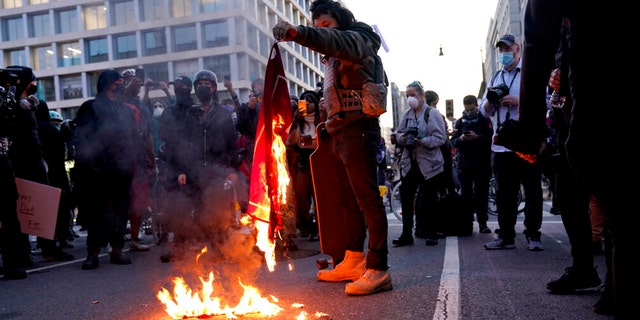 In some places, police physically stood between groups of Trump supporters and counterprotesters, said to be linked to Antifa and Black Lives Matter, to keep them separated. In others, chaos broke out as mobs heckled and in some cases attacked Trump supporters – including some walking with children. 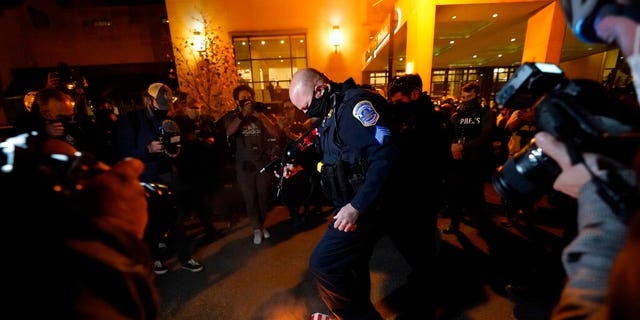 An officer puts out a sign that counter-protesters lit on fire after supporters of President Donald Trump held pro-Trump marches Nov. 14, in Washington. (AP Photo/Julio Cortez)

Numerous videos on Twitter showed shouting matches and violence on streets and sidewalks.

One showed an altercation escalate with a mob of alleged “BLM-Antifa thugs” swarming and punching a man from behind in an intersection. Moments earlier, he attacked someone holding a megaphone. He shoved people away until someone carrying a “Trump/Pence Out Now!” sign finally knocked him out with a sucker punch. When he rose a few moments later, there appeared to be a gash on his face and a lot of blood.

He reportedly was taken to police after the video ended.

Another showed a group of purported Antifa members burning a flag near Black Lives Matter Plaza, just north of the White House. 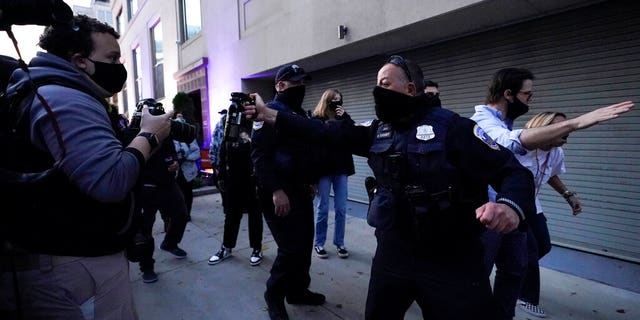 A police officer threatens to use pepper spray as they help a woman leave the counter-protester area after supporters of President Donald Trump held marches Nov. 14, in Washington. (AP Photo/Julio Cortez)

And yet another showed what appeared to be fireworks going off in the outdoor seating area of a restaurant with a crowd of onlookers just a few feet away.

Police rushed to intervene outside a Washington hotel after counterprotesters appeared to try to follow a group of Trump supporters home. Video of that incident shows officers forming a line, batons in hand, and ordering the mob to “move back” from the hotel’s entryway.

A National Park Service permit for the rally was issued for up to 10,000 people, although several thousand more appeared to show up.

‘Croods’ Holds Sign of Hope for Theaters With $9.7 Million Debut