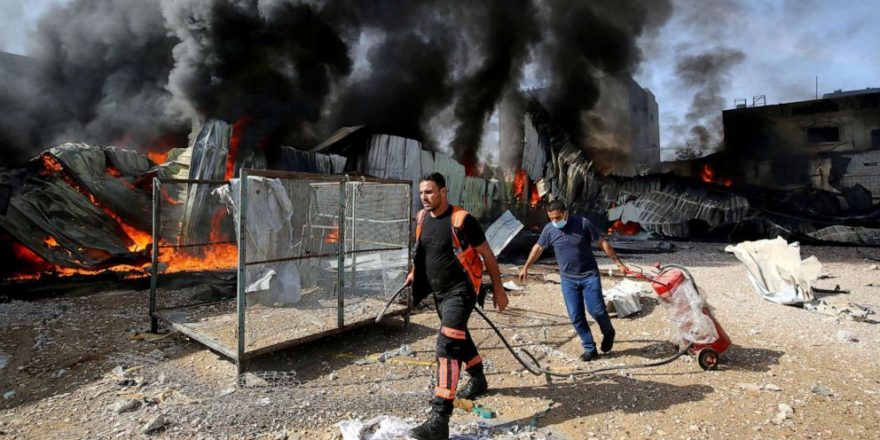 As the fighting between Israeli forces and Hamas, the militant group that governs Gaza, enters a second week, President Joe Biden’s administration is facing increased pressure to push for a cease-fire and take a more active role in addressing the decades-old conflict between Israelis and Palestinians.

Neither Biden nor his top advisers have outright called for a cease-fire, with Secretary of State Antony Blinken saying Monday that it was up to the warring parties.

But an increasingly vocal wing of Biden’s own party is pressing him to pressure Israeli Prime Minister Benjamin Netanyahu to halt Israeli strikes on Gaza. On Sunday, 29 Democratic senators issued a joint statement urging an “immediate ceasefire,” as did the top Republican and Democratic senators on the Senate Foreign Relations Committee’s Mideast subcommittee.

“We have been working around the clock through diplomatic channels to try to bring an end to the conflict,” Blinken said Monday in Denmark, where he was starting an climate-focused trip through the Arctic region.

Netanyahu has made clear he is not ready for one and will take further military action, with the U.S. seemingly unwilling to dissuade him from, as Hamas continues to fire rockets indiscriminately into Israeli territory.

The State Department’s deputy assistant secretary for Israeli-Palestinian issues Hady Amr also had his first meetings with Palestinian leaders, sitting down with Palestinian Authority President Mahmoud Abbas Monday in the West Bank — who has little to no influence with Hamas and its leadership in Gaza.

The White House defended its reticence, with press secretary Jen Psaki telling ABC News Monday, “The prism we are making all of our decisions through is: How can we help bring an end to the violence and bring an end to de-escalate the situation on the ground? And our calculation at this point is that having those conversations behind the scenes, weighing in with our important strategic partnership we have with Israel, also with other countries in the region, is the most constructive approach we can take.”

Israel unleashed a wave of airstrikes overnight to target Hamas’s system of underground tunnels, Israeli Defense Forces said Monday, claiming to have killed more than 130 Hamas fighters and destroyed over 60 miles of tunnels. Rocket fire from Gaza continued as well, with the IDF reporting more than 3,200 fired in the last week.

Biden has defended Israeli strikes, saying that he’s seen “no overreaction” and that Israel has a right to self defense. But a strike on Saturday seemed to turn the tide, especially among Democratic lawmakers in the U.S.

Israeli forces destroyed the offices of the Associated Press, Al Jazeera, and other outlets in Gaza on Saturday. Israel said that Hamas used the building as well, which the Associated Press denied, and that it should intelligence with the Biden administration to that effect.

Blinken said Monday he had not personally seen “any information provided” to the U.S., adding, “To the extent that it is based on intelligence, it would have been shared with other colleagues, and I’ll leave it to them to assess.” The top U.S. diplomat spoke to the Associated Press’s president Saturday, expressing “relief” that no one was harmed.

But other Democrats have expressed outrage. In a statement, Sen. Bob Menendez, D-N.J., the chair of the Senate Foreign Relations Committee and a staunch supporter of Israel, called for “a full accounting of actions that have led to civilian deaths and destruction of media outlets. All political and military leaders have a responsibility to uphold the rules and laws of war and it is of the utmost importance for all actors to find ways to deescalate and reduce tensions. This violence must end.”

Menendez was one of only a handful of Democrats that didn’t join a joint statement issued Sunday, led by freshman senator Jon Ossoff, D-Ga., that said succinctly, “To prevent any further loss of civilian life and to prevent further escalation of conflict in Israel and the Palestinian territories, we urge an immediate ceasefire.”

Even some Republicans have made similar pleas. Sen. Todd Young, R-Ind., the top Republican on the Senate Foreign Relations Subcommittee for the Middle East, joined his Democratic chair Sen. Chris Murphy called for a cease-fire to “be reached quickly and that additional steps can be taken to preserve a two-state future.”

“If we think that there’s something, including at the United Nations, that would effectively advance that, we would be for it,” he added.

In the meantime, he and Sullivan continued to make calls Monday. Sullivan spoke to his Israeli and Egyptian counterparts, while Blinken spoke to Tunisia and Jordan’s foreign ministers.

His envoy Deputy Assistant Secretary Amr also met with Abbas in Ramallah, one day after meeting several Israeli and U.N. officials in Israel.