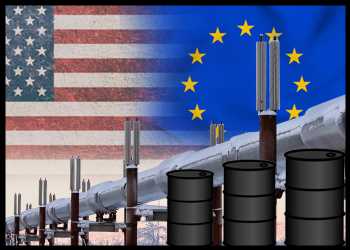 The United States and the European Union have agreed upon a major deal on liquefied natural gas, or LNG, in an attempt to reduce Europe’s reliance on Russian energy and to strengthen European energy security in the wake of the war in Ukraine.

Friday, visiting U.S President Joe Biden and his European Commission counterpart Ursula von der Leyen announced a joint Task Force for Energy Security. It will be chaired by one representative from the White House and another of the European Commission President. The Task Force will work to ensure energy security for Ukraine and the EU in preparation for next winter and the following one while supporting the EU’s goal to end its dependence on Russian fossil fuels.

Under the agreement, the U.S. will supply at least 15 billion additional cubic meters of LNG to the European Union this year, with expected increases in future.

The European Commission will work with EU Member States toward the goal of ensuring, until at least 2030, demand for approximately 50 bcm/year of additional U.S. LNG. This will be done on the understanding that prices should reflect long-term market fundamentals and stability of supply and demand.

The United States and the European Commission will undertake efforts to reduce the greenhouse gas intensity of all new LNG infrastructure and associated pipelines, including through using clean energy to power onsite operations, reducing methane leakage, and building clean and renewable hydrogen-ready infrastructure.

The European Commission will prepare an upgraded regulatory framework for energy security of supply and storage, as well as working with EU Member States to accelerate regulatory procedures to review and determine approvals for LNG import infrastructure. The United States will maintain its regulatory environment with an emphasis on supporting this emergency energy security objective and the REPowerEU goals.

The United States and the European Commission have agreed to engage key stakeholders, including the private sector, and deploy immediate recommendations to reduce gas demand by accelerating market deployment of clean energy measures.

The REPowerEU plan estimates that reductions through energy savings in homes can replace 15.5 bcm this year and that accelerating wind and solar deployment can replace 20 bcm this year, and through EU’s existing plans such as “Fit for 55” contribute to the EU goal of saving 170 bcm/year by 2030.

The two sides will work together to expedite planning and approval for renewable energy projects and strategic energy cooperation, including on technologies such as offshore wind.

The 27-nation European bloc, which heavily depends on Russian gas, has already set a target of cutting imports significantly in response to Russia’s invasion of Ukraine.