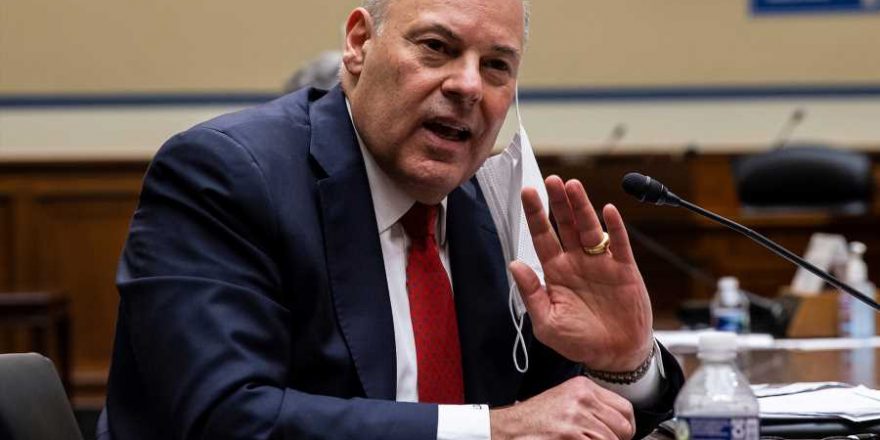 The legal fallout after four years of Trump administration cronyism and corruption shows no sign of slowing down. The Washington Post reported on Thursday that the FBI had opened an investigation into Louis DeJoy, the controversial USPS postmaster appointed by Trump in 2020.

According to the Post, the federal investigation pertains to past campaign-fundraising efforts at a logistics company formerly run by DeJoy, including whether employees who worked for DeJoy were reimbursed for donations they made to Republican candidates. Donating to a federal candidate and getting repaid for it is known as a straw-donor scheme, and it’s illegal under federal law because it allows someone to make contributions that exceed federal limits while masking the money’s true source.

Trump Cancels His Struggling Personal Blog After Less Than a Month

A spokesman for DeJoy confirmed the existence of the investigation but told the Post that DeJoy had “never knowingly violated” campaign-finance laws. “Mr. DeJoy has learned that the Department of Justice is investigating campaign contributions made by employees who worked for him when he was in the private sector,” the spokesman, Mark Corallo, said. “He has always been scrupulous in his adherence to the campaign-contribution laws and has never knowingly violated them.”

In May 2020, Trump appointed DeJoy, a prolific donor to Republican candidates and political committees who previously led a logistics company, to be USPS postmaster. After DeJoy began instituting cost-cutting measures, Democratic members of Congress questioned whether he was undermining the Postal Service in the middle of an election year in which tens of millions of Americans were expected to vote by mail, and in which then-President Trump spread disinformation about the security of mail-in voting. There were reports that, on DeJoy’s watch, USPS employees were told to take high-speed mail-sorting machines offline. Mail service also saw increased delays as DeJoy’s efforts to tackle the service’s deficits went into effect. “DeJoy needs to answer for the damage already done,” Sen. Ron Wyden (D-Ore.), a proponent of mail-in voting, said last August.

But it appears to be political-campaign donations made by employees of a company DeJoy ran that caught the attention of the FBI. The Post reported last year that multiple former employees of North Carolina-based New Breed Logistics claimed “they were pressured by DeJoy or his aides to attend political fundraisers or make contributions to Republican candidates, and then were paid back through bonuses.” The donations in question took place from 2003 to 2014, which is outside the statute of limitations for the ban on straw-donor schemes. A federal-election complaint filed last year by the Campaign Legal Center, a government watchdog group, alleged that suspicious campaign giving continued later on, after DeJoy’s firm was acquired by the company XPO Logistics.

“Between 2015 and 2018, during DeJoy’s tenure as XPO’s CEO and then as a board member, campaign finance records show several instances of XPO employees contributing to the same candidate or committee, during the same period of time, and often in similar amounts; DeJoy family members, including DeJoy’s college-aged children, also made contributions on the same day or in the same period as those employees,” the complaint reads. One recipient of that money, the complaint notes, was the primary 2016 fundraising account for Donald Trump.