President Donald Trump said he is “counting on the federal court system” to ensure that the winner of the November presidential election is called just hours after the polls close, despite current rules across the country allowing ballots to be counted several days to weeks after the election.

“Now we’re counting on the federal court system to make it so that we can actually have an evening where we know who wins. Not where the votes are going to be counted a week later or two weeks later,” he said at a rally in North Carolina Saturday.

On the topic of the judicial system, Trump also shared his plans to nominate a new Supreme Court associate justice “next week” to fill Ruth Bader Ginsburg’s seat following her death on Friday.

There are fewer than 45 days until the Nov. 3 election, and it has taken about 68 days historically for a Supreme Court nominee to win confirmation in a vote on the Senate floor.

Rep. Don Beyer (D-Va.) called out Trump’s comments on Twitter, arguing that the president wants to “use the federal courts to cheat in November by denying Americans’ lawfully cast mail-in ballots.”

“This is an open admission that Trump hopes to use the Supreme Court to steal the election,” he added.

Trump’s comments came after several states extended the deadline to count mailed absentee ballots so long as they are postmarked either on or before Nov. 3.

A Michigan state judge ruled Friday that absentee ballots postmarked before Election Day can be counted up to 14 days after the election.

Pennsylvania’s Supreme Court similarly ruled Thursday that mailed ballots postmarked by 8 p.m. Election Day can be counted up to three days after the election. 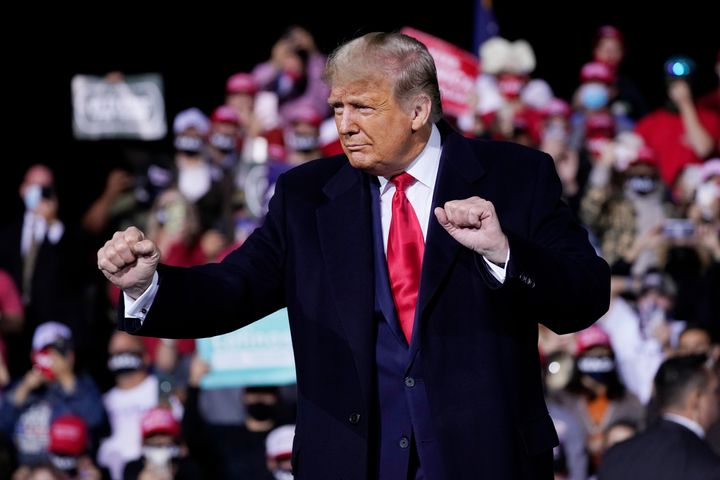 California has one of the longest windows for ballot counting. Democratic Gov. Gavin Newsom in June signed a law to allow ballots postmarked by Election Day to be counted up to 17 days after the election. The extension was enacted after a record 72% of California voters cast a ballot by mail in the state’s March primary, according to state data.

Many of the state extensions apply only to the 2020 election. Legislators acted out of concern that changes at the U.S. Postal Service could affect delivery times. They also expected that more people will vote by mail this year because they worry about the safety of in-person voting during the ongoing coronavirus pandemic, and that could overwhelm the Postal Service.

Trump has long claimed, without supporting evidence, that mail-in voting will lead to widespread voter fraud.

The campaign also recently filed a motion against members of the Navajo Nation in Arizona after they sued the state to extend the state’s mail-in-ballot deadline. A federal judge last week rejected the Trump campaign’s request to join Arizona in its arguments against the tribal members’ lawsuit.