Home » Politics » Trump Endorsed Her. Now She Wants to Use State Power to 'Crush' the Left and Impose 'God's Moral Order' 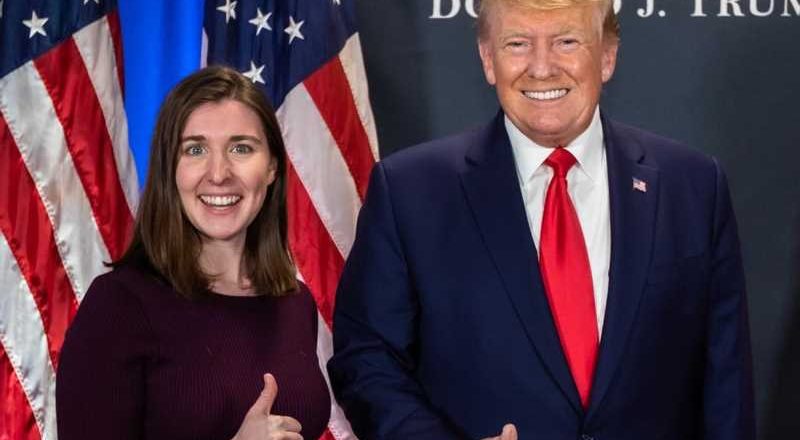 Jacky Eubanks is running for the Michigan legislature with a “wholehearted” endorsement from Donald Trump who calls her “an America First Patriot.”

Banning contraception, gay marriage and imposing the “Christian moral order” on the nation.

Eubanks, a Gen Z conservative who falsely claims Trump won the 2020 election in Michigan, disclosed her extreme views in an interview on “Church Militant,” a digital media service that has been designated by the Southern Poverty Law Center as an “anti-LGBTQ hate group.”

Church Militant is run by Michael Voris, an ex-TV news reporter and formerly gay man who has been criticized as a leader of the “Catholic alt-right.” (Church Militant has strained relations with actual church leaders; it was originally known as RealCatholicTV until the Archdiocese of Detroit told Voris he was not “authorized” to use the word Catholic in his branding.)

Exclusive: Trump Is Telling Allies His Record on Abortion Could Hurt His 2024 Chances

'Silence of the Lambs': The Complete Buffalo Bill Story

In the interview, posted to Eubank’s campaign Facebook page on Thursday, she insisted she is not a typical politician, “walking in the ways of the wicked,” and said her campaign is a manifestation of “God bringing together a coalition of true conservatives to save this country.”

Voris and Eubanks engaged in a lengthy discussion of politics and faith. “We see everything going on with Roe right now — the left becoming completely uncorked losing their minds,” Voris said. “They’re saying, ‘They’re coming after your gay marriage next. They’re coming after your birth control.’” He paused a beat before adding with a smile, “Well, you know what… yeah!”

When Voris suggested to Eubanks that her political opponents are likely to paint that as extreme, Eubanks countered: “I don’t see what we believe as extreme at all. We need to return to God’s moral order. That’s not radical. God’s morality is for everybody,” she said. “You cannot have happiness outside of God’s moral order.”

Voris then drilled down on contraception, specifically, asking Eubanks if she would use her vote in the Michigan statehouse to make it illegal. “We have a declining population. We have an underpopulation problem. All of this could be avoided if we were a truly pro-life nation,” Eubanks said. If contraception came up for a vote, she insisted, “I would have to side with it should not be legal.” Eubanks then blasted the notion of “consequence-fee sex” saying a birth control ban would encourage people to “wait until marriage, to practice chastity.”

Such remarks by the Trump-endorsed Eubanks — who also vowed she’d work to ensure that abortion is illegal in Michigan — may increase the former president’s anxiety that his role in appointing anti-choice judges might dim his 2024 prospects with suburban women voters.

Such concerns were not top of mind for Voris. Plainly delighted with Eubanks, he warned her: “You’re going to get the Marjorie Taylor Greene treatment.”

Eubanks agreed — “They’re going to try to label me crazy,” she said — and insisted that the Georgia congresswoman is her political hero, in particular for standing against “the radical transgender agenda” by trolling a fellow member of Congress.

The interview closed out with Eubanks and Voris bashing the political left. “It uses mob violence to achieve its political ends,” Eubanks said, “which is why we saw them burning down the country in the summer of 2020 — all because of ‘saint’ George Floyd.”

Cautioning that the left is going to “resort to mob violence” when they see that they’re “losing politically,” Eubanks closed with a stark warning about how she intends to wield state power. “I’m hoping that, through God’s grace, we can use the political positions of legal power that conservatives will get to crush that revolutionary force,” she said. “Over my dead body this country will be Communist — and I mean that.”

Watch a portion of the interview below: