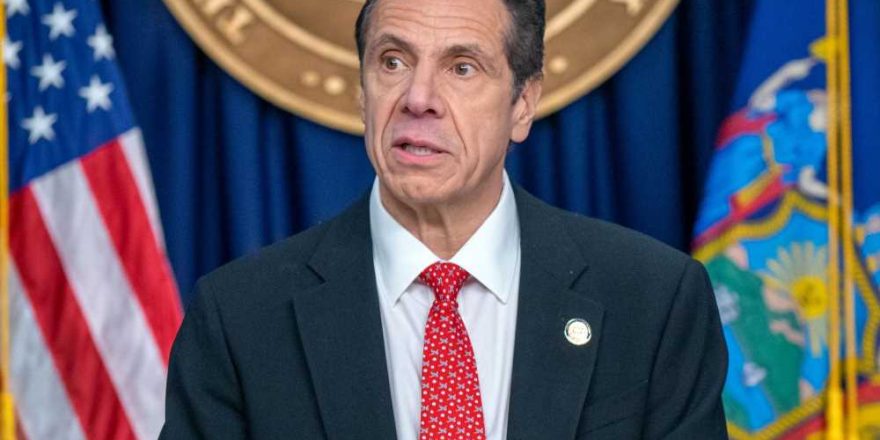 In an interview with The New York Times published Monday, Anna Ruch described first meeting the politician at a wedding reception in the city in September 2019, claiming that he made unwanted physical advances toward her.

Ruch, now 33, told the Times that she had thanked Cuomo, 63, for his touching words about the newlyweds during his speech, after which he allegedly placed his hand on her lower back.

As she removed his hand, Ruch said, Cuomo allegedly called her "aggressive," placed his hands on her cheeks and asked if he could kiss her.

The Times published a photo that shows Cuomo's hands on Ruch's face, though it's not clear what their exchange consisted of.

"I was so confused and shocked and embarrassed," Ruch told the paper. "I turned my head away and didn't have words in that moment." When reached by the Times, a spokesman for the governor did not address Ruch's allegations directly but referred to a general statement Cuomo released Sunday that said some of his past actions "have been misinterpreted as an unwanted flirtation."

"To the extent anyone felt that way, I am truly sorry," Cuomo said in that statement. "To be clear I never inappropriately touched anybody and I never propositioned anybody and I never intended to make anyone feel uncomfortable, but these are allegations that New Yorkers deserve answers to. That's why I have asked for an outside, independent review that looks at these allegations."

Ruch joins two former aides to the governor who have accused Cuomo of harassment in recent months: first Lindsey Boylan and then Charlotte Bennett.

Boylan, who was an economic development adviser and stopped working for Cuomo in 2018, spoke out in December and subsequently detailed her allegations in a lengthy blog post last week.

Bennett, an executive assistant and health policy adviser who left Cuomo's administration last year, spoke out this weekend in an interview with the Times.

Cuomo has denied both accounts — with a spokeswoman calling Boylan's claims of mistreatment, including an unwanted kiss, "simply false."

In a statement on Saturday, Cuomo denied Bennett's account as well, though he said she "was a hardworking and valued member of our team during COVID" and "has every right to speak out."

Bennett had told the Times that Cuomo made uncomfortably personal comments to her, including asking if she had ever had sex with older men.

"I understood that the governor wanted to sleep with me, and felt horribly uncomfortable and scared," she said.

"When she came to me and opened up about being a sexual assault survivor and how it shaped her and her ongoing efforts to create an organization that empowered her voice to help other survivors, I tried to be supportive and helpful," he said in his statement. "Ms. Bennett's initial impression was right: I was trying to be a mentor to her. I never made advances toward Ms. Bennett nor did I ever intend to act in any way that was inappropriate. The last thing I would ever have wanted was to make her feel any of the things that are being reported."

"This situation cannot and should not be resolved in the press; I believe the best way to get to the truth is through a full and thorough outside review and I am directing all state employees to comply with that effort," the governor added. "I ask all New Yorkers to await the findings of the review so that they know the facts before making any judgements. I will have no further comment until the review has concluded."

Cuomo — who became the country's most prominent governor last year thanks to his daily briefings on COVID-19 — said he and his administration will fully cooperate with the independent investigation of his behavior, which is being overseen by the state's attorney general.

Several New York lawmakers called on him to resign.

If you or someone you know has been sexually assaulted, please contact the National Sexual Assault Hotline at 1-800-656-HOPE (4673) or go to rainn.org.