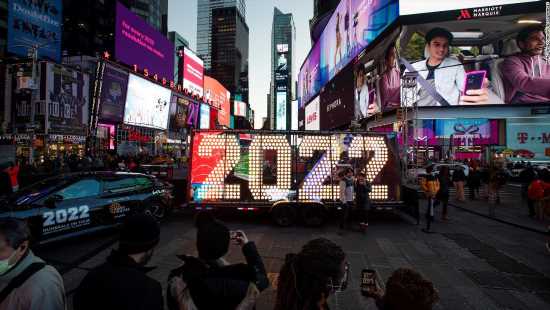 New York (CNN Business)A version of this article first appeared in the “Reliable Sources” newsletter. You can sign up for free right here.

The walls talk. The walls at the CNN offices in New York, that is. Famous proverbs and passages about journalism adorn the halls. Where the “Reliable Sources” team assembles, the wall carries a reminder that “news is only the first rough draft of history,” a maxim first attributed to Alan Barth.

The halls are empty again due to the extraordinary surge in Covid cases right now. CNN and other major media companies have paused return-to-office plans and reverted to essential personnel only, hopefully just for a period of weeks, while Omicron is on the march. The empty office is a humbling reality, much as “first rough draft” quotation is a reminder about the limitations of journalism. We can’t always see around the corner. We can screw up when we try.

So: I’m not making any grand pronouncements or sweeping predictions about 2022 here. Instead, I’m sharing stories from some of the wisest people in the media world, along with some questions that may be answered in the months ahead.

Questions for 2022, news and politics

— Will the midterm elections rejuvenate engagement and subscription stats for news publishers?
— Brian Lowry asks: “How will the Jan. 6 Committee play as a TV show, once the televised portions begin?”
— Which authors will surprise everyone with new books about the aftermath of the Trump years?
— What will CNN and MSNBC decide to do in the key 9 p.m. Eastern hour?
— Will Tucker Carlson remain all-powerful at Fox News? Who will Fox choose as his 7 p.m. lead-in?
— With Gayle King and Norah O’Donnell’s contracts coming up for renewal, what is Neeraj Khemlani’s master plan for CBS News?
— Which Oz will fare better: Mehmet, in Pennsylvania’s GOP primary, or his daughter Daphne, co-hosting a show in his former time slot?
— Will Congress make any meaningful moves against Big Tech?
— Oliver Darcy asks: “What will become of Trump’s ‘Truth Social’ app concept? Will it actually launch?”
— When can we start to talk about Covid-19 in the past tense?

Questions for 2022, business and entertainment

— Brian Lowry asks: “Will streaming start to consolidate, given the assumption that some of the go-it-alone players lack the necessary bulk to survive?”
— When will the Discovery-WarnerMedia deal take effect and what will change at the combined company?
— How will Bob Chapek “re-fire the creative engines” at Disney?
— Where will the next “Squid Game” come from, and will it be on Netflix or a rival?
— Will Parag Agrawal make any major moves in his first few months running Twitter?
— Will TikTok continue its explosive growth or will copycats like Reels slow it down?
— Who or what will buy Tegna? What else is up for sale?
— Brian Lowry asks: “Can awards shows rebound at all in 2022? Or will the losses associated with the pandemic year, and the continued uncertainty about traditional everyone-in-a-ballroom events, continue to plague them?”
— Where will the “apes” take AMC Entertainment?
— What will the “metaverse” look like at the end of the year? Will any major news orgs start to leverage the technology as a storytelling tool?
— What’s the biggest unknown in the media business that no one is even thinking about right now?

CNN’s forthcoming streaming service CNN+ “has the potential to reshape the market,” Variety’s Brian Steinberg wrote in this story about the news streaming wars. Plus-sized ads for the product appeared in Times Square on New Year’s Eve. New dad Anderson Cooper announced that he’ll have a weekly show called “Parental Guidance” in addition to his show “Full Circle” which is moving over to the platform from CNN.com. And if I had to guess, I’d expect more programming news soon.
A lot more streaming content is expected this year, per Steinberg’s story: “Newsmax 2,” a rebranding of CBSN, more MSNBC content on Peacock’s The Choice channel, streaming extensions of ABC’s “GMA,” and “a new show from Piers Morgan set to stream on Fox Corp. assets around the world, including Fox Nation,” just to name a few.

Loss and rebirth in local news

There are, sadly, many reasons to believe that “the fortunes of the local newspaper industry will continue to decline in 2022, with journalists in remaining newsrooms stretched thin,” Elahe Izadi wrote for the Washington Post’s “Year in Preview.”
She noted Alden’s pursuit of Lee Enterprises, among other data points. “But 2022 will also be a year of new ventures and projects,” Izadi wrote. “Nonprofits such as States Newsroom, which covers state governments, will expand to states such as Alaska and Nebraska. Brand-new outlets will launch, such as the nonprofit Capital B, which aims to provide ‘high-quality civic journalism tailored to Black communities.'”

Winter Olympics rights-holder NBCUniversal is under pressure “to avoid abetting China in presenting the event as a kind of nationalistic pageant, as the network will face scrutiny over how it covers the Games and the international protests against the Beijing regime,” Deadline’s Ted Johnson wrote in his look-ahead to 2022.

Roku is “poised to become a streaming power on its own,” Puck’s Matthew Belloni says, calling it “the company to watch in 2022.” That’s what Belloni told Bloomberg’s Lucas Shaw for this 2021/2022 feature. Shaw asked other reporters for year-ahead predictions, and here are just a few:
— Bloomberg’s Mark Bergen: “YouTube will make a big splash in augmented/immersive reality (but won’t call it ‘metaverse’).”
— The Information’s Kaya Yurieff: “We’re going to stop romanticizing the creator economy and start having a labor discussion about internet personalities, similar to the gig economy.”

— Sports Business Journal’s John Ourand: “Amazon will buy a 49% stake in the NFL’s digital media properties, including NFL Network, RedZone and NFL.com, in the first quarter of the year. That deal will not include Sunday Ticket, which will go to ESPN+ and DirecTV.”
Shaw is also out with a new column with his own 2022 forecasts, including “a bumpy year for streaming services” in the US; “the concert business will return to normal;” and “top of the line talent will make more money than ever before.
Source: Read Full Article