Home » Politics » The publisher of a Trump-aligned tabloid agreed to pay the FEC nearly $200,000 for violating campaign-finance law during the 2016 election 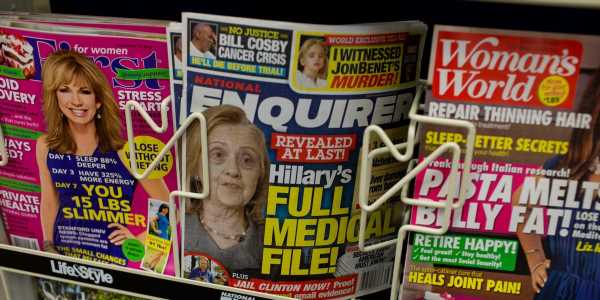 The publisher of a Trump-aligned tabloid agreed to pay the FEC nearly $200,000 for violating campaign-finance law during the 2016 election

A360 Media LLC., the parent company of the Trump-aligned tabloid National Enquirer, has agreed to pay the Federal Election Commission $187,500 for breaking campaign finance law during the 2016 election, The Wall Street Journal reported.

The agreement between A360 and the FEC relates to the former’s role in a “catch-and-kill” operation in which it purchased the rights to a story in which the former Playboy model Karen McDougal alleged that she had an affair with then-Republican presidential candidate Donald Trump in the 2000s. In the agreement, dated May 17, the $150,000 payment was described as an illegal corporate campaign contribution, according to the Journal.

This week’s development comes more than two years after federal prosecutors said that American Media Inc. — the name A360 previously went by — paid McDougal because it wanted to “suppress the model’s story so as to prevent it from influencing the election.”

Prosecutors also said in a joint nonprosecution agreement released with American Media Inc. that the payment was made “in cooperation, consultation, and concert with … one or more members or agents of a candidate’s 2016 presidential campaign.”

McDougal was the second woman to file a lawsuit to get out of a nondisclosure agreement with Trump; the first was the adult film actress Stormy Daniels, whose allegations are at the center of an ongoing Manhattan district attorney’s office investigation into whether the Trump Organization ran afoul of state laws.

Specifically, state prosecutors as well as investigators from the New York attorney general’s office are examining whether the Trump Organization broke the law when it facilitated the payment to Daniels. The Manhattan DA’s office scored a major victory when the Supreme Court in March cleared the way for it to obtain eight years of Trump’s tax records.

According to court filings, prosecutors are scouring the former president’s finances as well as those of his sprawling real estate empire to determine whether they inflated or deflated the value of their assets for loan and tax purposes.

Allen Weisselberg, the Trump Organization’s longtime chief financial officer, is also said to be a key figure of interest for prosecutors, who have been working to secure his cooperation for several weeks now. They’ve also spoken to Weisselberg’s former daughter-in-law, Jennifer, as part of the investigation, and she told Insider that she’s cooperating with the inquiry and has already turned over several boxes of documents.