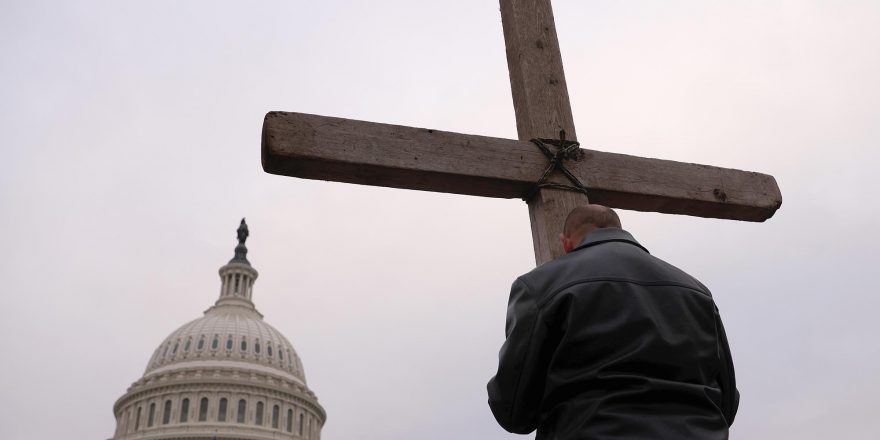 The Christian Right Is Taking Political Violence to the Next Level

When President Biden addressed the nation on Thursday morning, he asked Americans a seemingly rhetorical question: “Are we going to be a nation that accepts political violence as a norm?”

“Of course we are not!” true patriots are meant to answer in their heart of hearts, feeling all the feels for a country that withstood the insurrection of January 6, 2021, only to presumably bounce back better.

But the premise behind the question was flawed. To put a fine point on it: Americans have always accepted political violence as a norm. From the mass killing of Native Americans to the subjugation of generations of enslaved people, the land we stand on and the wealth we enjoy were built by violent means.

A Guide to the Right's Unhinged Conspiracy Theories about Jan. 6

And yet, it’s fair to say that the violence that occurred in our nation’s capital one year ago today is distinct from that which has come before. In the past, American political violence was about one group of people  — namely, white, Protestant ones  — asserting their assumed superiority over all others. Today, it’s about that same group of people acting out in the fear that their “superiority” is slipping away — or being intentionally stolen. According to findings published four days ago by the Chicago Project on Security and Threats, nine percent of Americans — a full 21 million people — agree both that Biden’s presidency is illegitimate and that the use of force is justified to restore Trump. The single most reliable predictor that someone would find themselves among that 21 million, per CPOST’s report, is belief in the so-called Great Replacement, the idea that “The Democratic Party is trying to replace the current electorate…with new people, more obedient voters from the Third World.”

It’s this idea, in fact, that is drawing previously disparate factions on the Republican Party together in common cause. Twenty-seven years ago, the political violence of the Oklahoma City bombing splintered the party. Today — and despite a bit of grandstanding in its aftermath — the violence of January 6 has united white nationalism with Christian nationalism, creating a more mainstream alliance embraced by entirely mainstream politicians.

And while white nationalism may have always had violence at its core, the same cannot necessarily be said of Christian nationalism — until now. If constructing a gallows to hang Mike Pence could be consistent with hoisting a sign that reads “Jesus Saves,” it’s because a critical mass of conservative white evangelicals have come to conflate ideas of manifest destiny and American essentialism with the idea of America as a nation consecrated by God. In this framing, the Great Replacement subverts the will of God. And the will of God must be defended at any and all costs.

“I think it’s set off a kind of apocalyptic approach to politics,” says Robert P. Jones, head of the Public Religion Research Institute and author of White Too Long: The Legacy of White Supremacy in American Christianity. “It’s a kind of desperate politics that has, in a sense, declared martial law. What happens when you’re in an emergency? You suspend the normal rules.” You may, for instance, stop turning the other cheek as Jesus instructed and instead decide to march to the Capitol, take some selfies, and then use a flagpole as a battering ram. To wit, in 2021, Jones’ research found that white Christians who believe that “God has granted America a special role in human history” were three times more likely (29 percent versus 10 percent) to also believe that violence may be necessary to save the country.

In part, this is because while the conspiracy theory that defines the Great Replacement  — the idea that Democrats are plotting an electorate overhaul  —  is not true, it is certainly true that white Christians are being replaced greatly. “As recently as 2008, when Barack Obama first ran for president, the country was 54 percent white and Christian; that number today is 44 percent,” says Jones. “Among white evangelicals, the median age today is 57. They’re a shrinking and graying group. They are no longer the unquestioned political, cultural majority voice.”

Psychology has long taught us that people will do more to get back what they’ve lost than to gain what they don’t yet have. As White Christians lose their dominance in American life, we should all be afraid of what extremists will do to get it back.