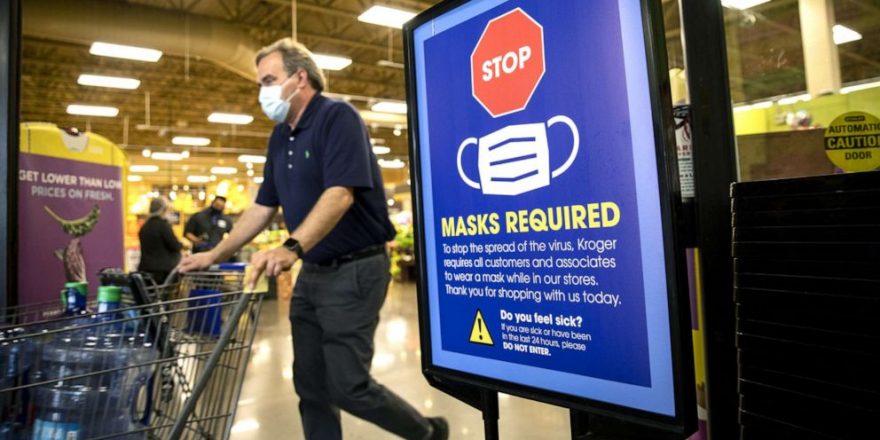 If you’re going to Starbucks or Target, bring your mask. But if you swing by Trader Joe’s, you can leave it in the car, assuming you are fully vaccinated of course. That said, if you’re taking public transportation to get there, you’ll need to mask up for the ride.

After 405 days of urging every man, woman and child to wear a mask, the Centers for Disease Control and Prevention stunned much of the nation this week — including health experts – with its recommendations that vaccinated Americans can mostly ditch the mask. The decision left businesses, governors and schools scrambling to respond and an emerging hodgepodge of rules for masks, depending upon which state, county or store a person is in.

The new CDC proposal also raise serious questions: Can employers require proof of vaccination before a worker goes mask-free? Should businesses ask patrons to present proof upon entry? Could teens, eligible for the vaccine, be denied access to a classroom without a mask if they aren’t vaccinated?

Governors said they weren’t briefed in advance on the plan, despite 24 states and the District of Columbia having some sort of state-wide mask mandate in place at the time of the announcement.

“We were as surprised as anyone by the CDC’s announcement – learning about it through the press,” said Republican Gov. Chris Sununu of New Hampshire, calling CDC messaging in recent months “inconsistent, convoluted, and ever changing.”

In Maine, Gov. Janet Mills told reporters she was “anxious” to hear from the CDC how to distinguish between vaccinated the unvaccinated people. But by Friday, Mills announced she was on board and that the state would adopt the CDC guidance as state policy.

Several health experts also said were caught off guard, assuming new mask recommendations would come when more Americans were fully vaccinated. Nearly 36% of the U.S. population is vaccinated, and the pace of shots has declined.

“I thought it would be prudent to wait until everyone who is willing (ages 12 and up) has had an opportunity to be fully vaccinated, around July 1,” said Linsey Marr, a virus transmission expert at Virginia Tech.

The White House, too, claimed to be unaware of precisely what the new recommendation would be, making the case that the CDC came to its conclusion without political pressure. Press secretary Jen Psaki said only a “small number” of people at the White House knew about the proposal Wednesday night.

“The White House was informed of that decision, just to give people assurance of that,” Psaski told reporters Friday.

When asked what the CDC guidance means for Biden’s executive order that mandates masks be worn on federal property, Psaki said it may take a few days for any possible changes, but she expects “the guidelines will be the guide.”

“We’re working to implement those [guidelines] across the government,” she said.

Several big-chain stores also seemed surprised, firing off terse statements that mask mandates would remain in place until they had a chance to review the new recommendations and determine which businesses might be subject to local mandates.

For its part, the CDC defended the new guidance as a natural next step based on emerging scientific evidence, including fresh studies that the vaccines were holding up against variants of the virus and cutting asymptomatic transmission. The CDC also cited plummeting case numbers and a recent decision by regulators that kids as young as 12 now qualify for vaccination.

“We have had a coalescence of more science that has emerged just in the last week,” Dr. Rochelle Walensky, director of the CDC, told reporters when asked what had changed in the past 16 days since the agency last released mask guidance.

Under the new recommendations, people who are fully immunized should feel safe removing their masks in almost all circumstances, even indoors and in a crowd. The guidelines call for masks to still be worn on planes, trains and buses, as well as homeless shelters, hospitals and prisons.

While the CDC insisted its decision was grounded in science, it seemed to acknowledge that it was unprepared to answer the questions that would come with it. In an interview with NPR’s “All Things Considered,” Walensky said the recommendation would trigger a review of other guidance.

“What we really need to do now as an agency is comb all of our guidance not just for travel, but for schools and for camps and for child care centers and for all of the guidance that we have out there … And that is going to be the work of the weeks ahead that we have in the agency,” Walensky told NPR on Thursday.

John Brownstein, chief innovation officer at Boston Children’s Hospital and an ABC News contributor, said one primary concern is that the U.S. is still experiencing active disease transmission with more than 35,000 COVID cases a day. Also, some vulnerable populations including children don’t have the option of getting vaccinated.

That puts everyone on the honor system and many people and businesses confused on how exactly to stay safe, he said.