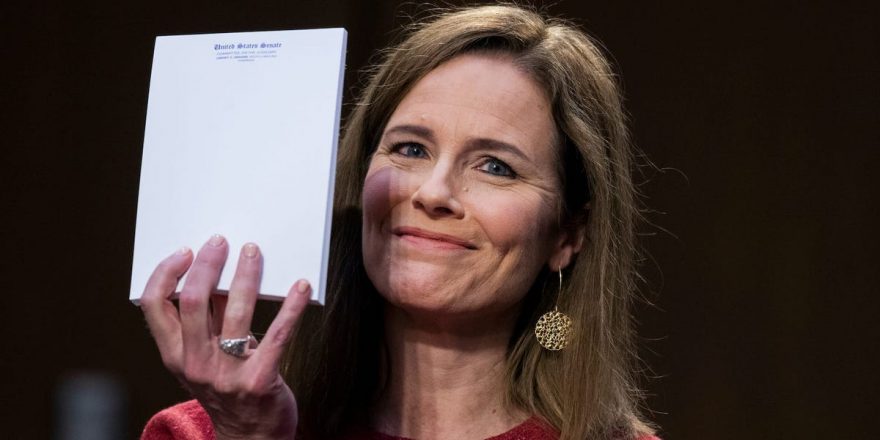 Conservative Supreme Court Justice Amy Coney Barrett has secured a $2 million advance for a forthcoming book, according to Politico.

Three publishing industry sources told Politico that Barrett’s book will focus on “how judges are not supposed to bring their personal feelings into how they rule,” a major theme from her 2020 confirmation hearings.

Barrett, 49, may have broken a record for the most lucrative book advance won by a sitting Supreme Court justice, according to freelance journalist Yashar Ali.

Her colleagues Clarence Thomas and Sonia Sotomayor both got advances upwards of $1 million for their books.

Barrett was confirmed by the Senate just three weeks before the 2020 election.

The timing and ideological stakes of Barrett’s nomination made it one of the most contentious in American history. Former President Donald Trump and then-presidential candidate Joe Biden clashed on how to fill the vacancy left on the bench after the death of Ruth Bader Ginsburg.

Barrett’s arrival to the bench tilted the court’s ideological balance firmly in Republicans’ favor, with Democrats voicing concerns during her confirmation that her addition could spell the end for major Democratic policy priorities such as the Affordable Care Act and abortion protections under Roe v. Wade.

A former clerk for the late Justice Antonin Scalia, Barrett established a track record as a staunchly conservative judge in her time on the US Court of Appeals for the Seventh Circuit in Chicago.

The Politico report on Barrett’s book deal also included details on former Attorney General Bill Barr securing his own. No advance figure was included for the Barr book, which will be his first.