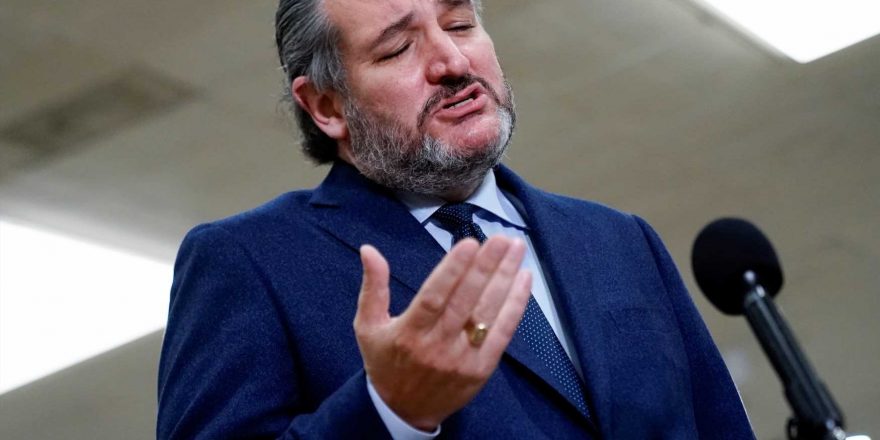 Is Sen. Ted Cruz now going to be known as "Flying Ted"?

Social media erupted early Thursday with multiple photos purportedly showing a masked Cruz boarding a plane in Houston and then flying to Cancun, Mexico even as millions of his fellow Texans froze because of historically low temperatures and widespread power outages.

Hours after thousands of posts on Twitter shared those photos, other images showed someone with the Republicans last name and first initial of his legal first name — Rafael — standing by for a flight from Cancun back to Houston later Thursday morning.

NBC News repeatedly reached out to Cruz's office about the images, but has received no response.

Beto O'Rourke, a Democrat who lost a close Senate election to Cruz in 2018, blasted him during an interview Thursday on MSNBC's "Morning Joe."

Cruz "is vacationing in Cancun right now when people are literally freezing to death in the state that he was elected to represent and serve," said the Democrat O'Rourke.

On Tuesday, Cruz had tweeted —in response to an article criticizing him for mocking California's own power outages a few weeks earlier — "I got no defense. A blizzard strikes Texas & our state shuts down. Not good."

In December, Cruz had criticized Democratic officials who did not follow their own coronavirus pandemic restrictions, including Austin, Texas, Mayor Steve Adler, who himself flew to Mexico for his daughter's wedding in November even as he urged Austin residents to stay home.

Former President Donald Trump, while running against Cruz in the 2016 Republican presidential nomination contests, regularly derided him with the scornful nickname "Lying Ted."

But Cruz later became an ardent Trump supporter, and last month unsuccessfully tried to get Congress to reject the certification of Joe Biden's Electoral College victories in several states.

This is breaking news. Check back for updates.