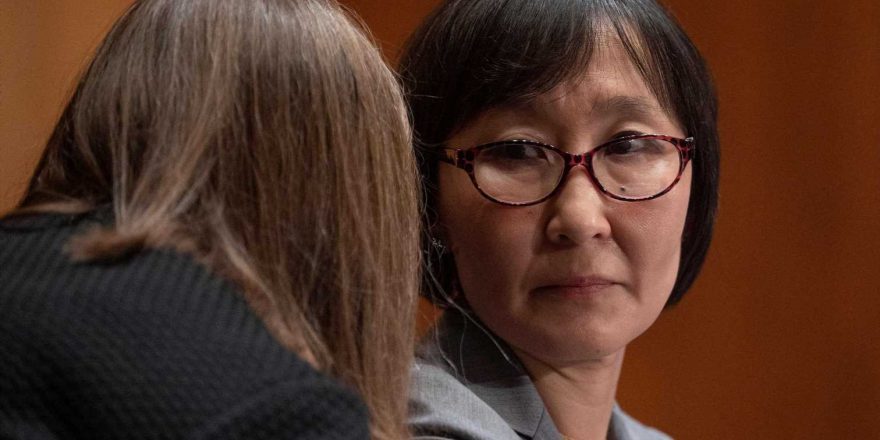 WASHINGTON — A nomination hearing for President Joe Biden's pick to be comptroller of the currency, Saule Omarova, turned fiery on Thursday as Democrats and Republicans took jabs at each other over the candidate's unconventional academic works and her upbringing in the Soviet Union.

Omarova's nomination to be one of the country's top bank regulators is uncertain given fierce opposition from the GOP and skepticism from moderate Democrats including Sen. Jon Tester of Montana.

The main concern among Republicans and a handful of Democrats is Omarova's writings as a legal scholar, which consider sweeping changes to the U.S. banking system.

Republicans on the Senate Banking Committee's kicked off the hearing with a review of the Cornell University law professor's legal studies. They challenged ideas she's explored to augment the power of the Federal Reserve and effectively franchise community banks as a threat to the future the U.S. financial system.

"Taken in their totality, her ideas amount to a socialist manifesto for American financial services," Toomey said in his opening remarks.

In one recent article, the Cornell University law professor explores the idea of taking consumer deposits away from community banks and parking them at the Federal Reserve. Community banks would then be paid by the U.S. government to operate ATMs and otherwise act as a local liaison on behalf of the Fed.

Sen. Richard Shelby, R-Ala., said he agreed with Toomey and added that he is "troubled" by her nomination and what he views as her ideas hostile to community banks.

The comptroller regulates about 1,200 banks with total assets of around $14 trillion, or two-thirds of the entire U.S. banking system. Its representatives work with big banks to ensure lenders are abiding by federal law and providing fair access to financial services and otherwise examining bank management.

If confirmed to lead the Office of the Comptroller of the Currency, an independent bureau of the Treasury Department, Omarova would be the first woman, immigrant and person of color to hold the role.

Omarova countered Shelby by noting the important role local banks play in vitalizing small businesses and how she felt when she opened her first U.S. checking account in 1991.

"Holding a check book in my hand was a symbol of economic freedom and autonomy," she said, a comparison to her childhood growing up in Kazakhstan when it was part of the Soviet Union.

Despite the GOP's focus on her academic works, Omarova insists that those writings are purely theoretical and should be viewed in the context of an ongoing debate among scholars. She also protested Republican efforts to paint her as anti-bank.

"If I am confirmed to lead the Office of the Comptroller of the Currency, my top priority will be to guarantee a fair and competitive market where small and mid-size banks that invest in their neighbors' homes and small businesses can thrive," she said in opening remarks.

If confirmed, she later said, community banks would "known no better ally than that would find in me."

"I know that difference between the job of an academic, and the freedom that academics have in terms of exploring ideas, … and the job of a regulator, which is very circumscribed," she told CNBC on Tuesday.

It remains to be been whether her recent comments are enough to persuade Democrats like Tester, who have yet to decide whether to back Omarova. Other centrist Democrats, including Sens. Joe Manchin and Kyrsten Sinema, are also reportedly unsure whether they will back Biden's pick to lead the Office of the Comptroller of the Currency.

Asked if her comments on Thursday pushed him for or against her candidacy, Tester told reporters that he is "going to synthesize what we heard."

"I'll probably have a statement later," he added. "I don't know about today, but it'll be soon."

Omarova's advocates say her candidacy is being tainted by discrimination based on where she was born.

A tense moment came just before 11 a.m. ET, when Sen. John Kennedy, R-La., asked Omarova about her membership in a youth communist group during her childhood in Kazakhstan.

Committee Chairman Sherrod Brown, D-Ohio, interrupted Kennedy's line of questioning as personal and irrelevant to her candidacy, a rare move that drew protests from the Republican at the end of his allotted time.

"I'm struggling with what to call her," Kennedy said. "I don't know whether to call her 'Professor' or 'Comrade.'"

Those comments were quickly rebuked by Democrats including Massachusetts Sen. Elizabeth Warren, who called such attacks on Omarova "vicious." Sen. Jack Reed, D-R.I., added that he is "disturbed" by the personal nature of her criticism.

But Democrats weren't alone in disavowing the focus on where Omarova was born. Sen. Thom Tillis, Republican of North Carolina, said he has "grave" concerns about her policy positions but has no qualms about her upbringing.

"For somebody's who's lost family members in the time that she was young, for somebody who was growing up in Russia, I would think that some of the decisions that Dr. Omarova may made back at the time had as much to do with survival as anything else," he said. "I don't have any concern with where she came from: You can't pick where you were born and you picked the greatest nation on earth to become a citizen."