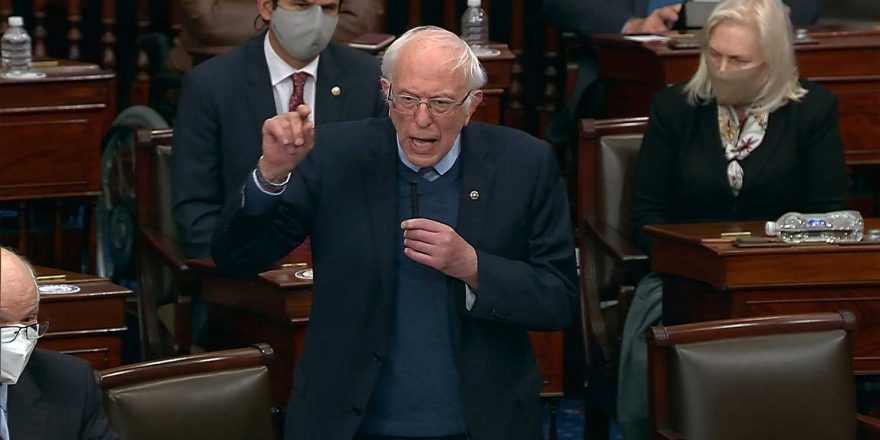 “At a moment when U.S.-made bombs are devastating Gaza, and killing women and children, we cannot simply let another huge arms sale go through without even a Congressional debate,” Sanders said in a statement.

“I believe that the United States must help lead the way to a peaceful and prosperous future for both Israelis and Palestinians. We need to take a hard look at whether the sale of these weapons is actually helping do that, or whether it is simply fueling conflict.”

The resolution would stop the sale, which Congress learned of on May 5, five days before the start of the latest conflict in the Mideast.

The latest: Israel unleashes airstrikes after vowing to press on in Gaza

The recent spate of violence has divided the Democratic Party, with many progressives more assertively supporting Palestinians in the conflict. Sanders’ resolution is in line with broader calls within the party to reexamine the U.S.’s longstanding, unconditioned military and economic aid to Israel.

“For decades, the U.S. has sold billions of dollars in weaponry to Israel without ever requiring them to respect basic Palestinian rights. In so doing, we have directly contributed to the death, displacement and disenfranchisement of millions,” said Ocasio-Cortez in a statement.

“At a time when so many, including President Biden, support a ceasefire, we should not be sending ‘direct attack’ weaponry to Prime Minister Netanyahu to prolong this violence.”

“Members of Congress have repeatedly requested a ceasefire in Israel and Palestine, yet once again, Benjamin Netanyahu has refused,” Pocan said in a statement. “That leaves us at a point where the only way to prevent innocent children and others from being killed is to take a necessary look at future weapons sales to the region.”

‘It’s a human rights issue’: Thousands across US join global protests in solidarity with Palestine

Congress may object to arms deals with other countries

Under U.S. law, the president must inform Congress of arms sales to foreign entities, after which lawmakers can submit formal disapproval of any potential sales. Congress was informally notified of the $735 million sale to Israel on May 5, opening a 15-day period for members of Congress to object to the transaction that ends Thursday.

While progressives in the party have advocated conditioning aid as a means of pressuring Israeli military operations, the sale is unlikely to be blocked in the wider Congress, with many Democrats and virtually all Republicans supporting the arms sale.

It includes a routine purchase of precision-guided weapons; those first raised alarm among many Democrats as the Israel-Hamas conflict increased in severity.

Sanders’ push comes after close to two weeks of ongoing violence, with Israel responding to rocket launches from the militant group Hamas in Gaza with sustained airstrikes on the territory.

The conflict has killed at least 10 Israelis and over 200 Palestinians, including at least 58 children.

Who’s who: Key players in the Israel-Palestinian conflict and why peace remains elusive in Gaza

Sanders has also directly criticized the Israeli government for its policies toward the Palestinian territories and Palestinian Israeli citizens within its borders.

“We can no longer be apologists for the right-wing Netanyahu government and its undemocratic and racist behavior,” Sanders wrote in a New York Times opinion piece, saying it’s illegal for U.S. aid to support human rights violations.

“For years we have seen a deepening Israeli occupation in the West Bank and East Jerusalem and a continuing blockade on Gaza that make life increasingly intolerable for Palestinians,” he wrote.