Retired Army Gen. Don Bolduc is ready for another tour of duty.

The first-time Republican candidate was unsuccessful in his bid this year to unseat Sen. Jeanne Shaheen of New Hampshire. But less than a week after this month’s election, he signed paperwork toward launching a 2022 Senate bid, when the Granite State’s other Democratic senator – Sen. Maggie Hassan – will seek a second 6-year term.

“My platform is simple. It’s about doing the right thing for people and serving them and not the other way around. And that resonates with everybody,” Bolduc told Fox News this week.

Bolduc – a New Hampshire native who was awarded two Purple Hearts and five Bronze Star medals during his more than three decades of service in the Army, including 10 tours of duty in Afghanistan — waded into a very different type of battlefield two years ago when he launched his Senate campaign. The GOP primary turned into a two-candidate race, with opponent Bryant “Corky” Messner endorsed by President Trump in June. 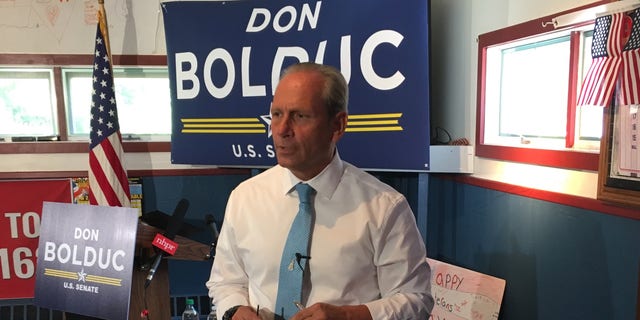 After Trump’s backing of Messner, Bolduc was no longer able to receive any assistance from the Trump Victory organization — the combined efforts of the president’s reelection campaign and Republican National Committee.

He was also shut out from the organization’s massive voter lists.

Bolduc ended up losing to Messner by 8 percentage points, or just over 11,000 votes, in the Sep. 8 primary.

This time around, he said, "Let’s have a fair election. Let’s give everybody a chance, and let’s let Granite State [voters] figure out who they want to represent them.”

But he doesn’t blame the president and says he remains a Trump supporter.

“I voted for him, and I support him and I believe the president has our best interests in mind when it comes to the economy, fiscal responsibility, and the safety and security of Americans,” Bolduc said. “I don’t blame President Trump. I blame DC political operatives that were self-serving, that got in the way.”

Bolduc said his move to file 2022 paperwork with the Federal Election Commission was partly out of necessity, to push forward his nearly half-million dollars in unspent 2020 campaign funds. Federal election rules allowed him 60 days following the Sept. 8 primary to roll over his campaign cash or return it to donors.

“We had money left over and we had to transfer that money, and we had a deadline of Nov. 8 to do that,” Bolduc noted. “That’s a process –  you’ve got to contact the donors and ask them the permission to keep the money and roll it over, or cut a check and refund it. I will tell you that everybody said ‘keep our money – we want you in ’22.’”

Bolduc struggled with fundraising during much of his 2020 bid and was outspent by Messner, a self-made millionaire who mostly self-funded his campaign. He says his early start for 2022 will hopefully change the equation.

“One of the things I learned is that you never have enough time and at the end of the day you never have enough money,” he said. “So let’s … get a head start on fundraising and however [the] political landscape plays itself out, whoever pops in here, we’ll adjust fire to it. It’s better to do that than wait for somebody else to make their decision.”

Two potential Republican candidates who could “pop in” are popular Gov. Chris Sununu – who earlier this month was overwhelmingly re-elected to a third two-year term steering New Hampshire – and former Sen. Kelly Ayotte, who was defeated by Hassan by a razor-thin margin of roughly 1,000 votes in 2016.

Asked about Sununu and Ayotte, Bolduc said: “I don’t have any concerns about it and when we come to that bridge, we’ll cross it. I will do the best thing for the state of New Hampshire. But I can’t wait for them. They have a significant advantage over me. He’s the sitting governor. If I wait for him to make a decision, I’m going to be playing catchup. If I wait for Kelly Ayotte to make a decision, the same thing.”

Republicans face another challenging Senate map in 2022, as they'll once again be definding the majority of the seats up for grabs. National GOP strategists see New Hampshire, along with Nevada and Arizona, as potential states where they might be able to flip a blue seat red.

Earlier this month, Messner, who topped Bolduc in this year’s September primary, was soundly defeated by Shaheen in the general election. Bolduc argued that if he had won the primary, “I would have done way better than Corky” against Shaheen. “I would have had her out of her comfort zone.”

Looking ahead to the 2022 campaign, the former general said his message is simple.  “I am a patriot – a man who loves his country. A man who loves his state. I was born and raised here. I will do nothing to hurt the people of this state.”