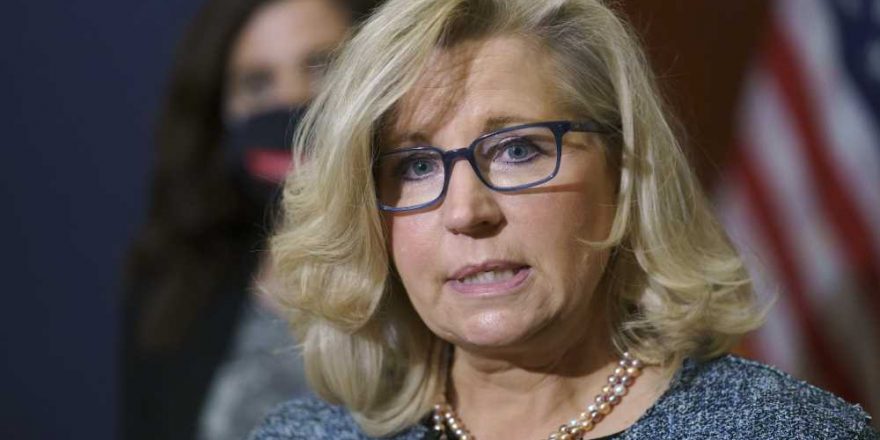 Cheney, the third-highest-ranking Republican in the House, has taken heat from within the party since her vote to impeach. She has been criticized for consistently condemning the former president’s actions during the insurrection at the Capitol on January 6th and for saying that her Trump-loving colleagues need to move on from his election loss.

With Afghanistan Drawdown Underway, Pentagon Prepares for Attacks From Taliban

Lady Gaga's 'Born This Way': Much Better Than 'Express Yourself'

But on Friday, Minority Whip Steve Scalise (R-La.) told Axios the GOP is still the party of Trump. “This idea that you just disregard President Trump is not where we are, and, frankly, he has a lot to offer still,” Scalise said.

The congresswoman drew further criticism from colleagues this week for greeting President Biden with a fist bump as he entered the House chamber to deliver his address to Congress. Cheney responded to the backlash on Twitter, saying, “We’re not sworn enemies. We’re Americans.”

“I disagree strongly [with] Joe Biden[‘s] policies, but when the President reaches out to greet me in the chamber of the U.S. House of Representatives, I will always respond in a civil, respectful & dignified way. We’re different political parties. We’re not sworn enemies. We’re Americans,” Cheney wrote.

But by Saturday, Texas Republican Congressman Lance Gooden issued a prediction that Cheney would be gone by the end of May.

“Liz Cheney has promised she will campaign on impeaching Trump ‘every day of the week,’ ” Gooden tweeted. “Good luck with that, Liz! PREDICTION: she’ll be out of her GOP leadership role by month’s end!”

Unsurprisingly, Trump has gone after Cheney several times since her impeachment vote, calling her a “warmongering fool” during an interview this week.

Trump lies a lot, but not here. Cheney, who worked as an adviser to her father Dick Cheney when he was vice president under George W. Bush when both wars in Iraq and Afghanistan began, is known widely as a war hawk who is at odds with Trump’s more isolationist foreign policy approach. Recently, the congresswoman advocated for the continuation of the decades-long war in Afghanistan when she came out against Biden’s plan for troops to leave the country, calling it a “really reckless decision.”

When she first joined Congress, Cheney was the darling of neoconservatives like Bill Kristol, who were so giddy when she aggressively pushed back on Obama’s attempts to close the Guantanamo Bay Detention Camp that, according to a 2017 article in Mother Jones, Kristol hoped Cheney would run for president. And neoconservative Michael Goldfarb told New York Magazine in 2010, that his excitement for Cheney topped the enthusiasm he’d had for Sarah Palin.

The never-Trump neoconservative hawks may actually get their long-awaited wish. When asked if she planned on a 2024 presidential run this week, the congresswoman refused to rule it out. But, she has publicly stated she is running again for her seat in 2022.

Trump, however, has mocked the idea of a Cheney run for the White House, saying in a statement, “She’ll either be yet another lobbyist or maybe embarrass her family by running for President, in order to save face.”