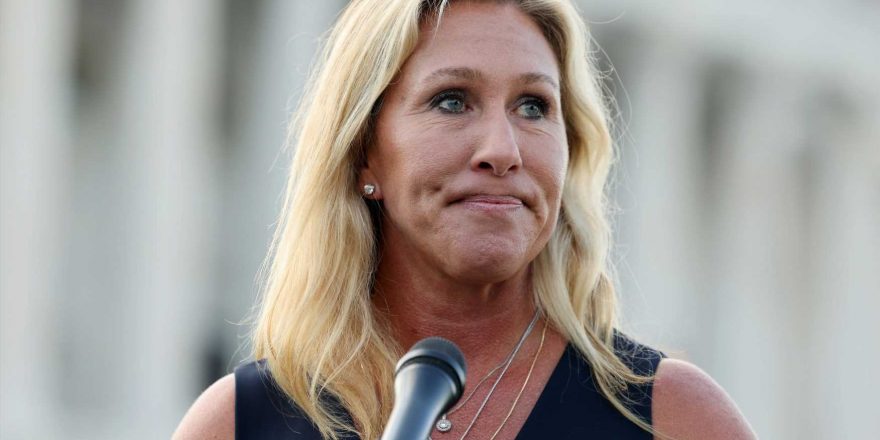 Rep. Marjorie Taylor Greene, R-Ga., apologized Monday for a series of comments she made comparing coronavirus-related rules and restrictions to the treatment of Jewish people in Nazi Germany.

The display of contrition came hours after Rep. Brad Schneider, D-Ill., announced that he and other lawmakers would introduce a resolution to censure her for the remarks, which had been condemned as anti-Semitic by Republicans and Democrats alike.

"I know that words that I have stated were hurtful, and for that I'm very sorry," Greene told reporters outside the U.S. Capitol.

Greene said she had visited the Holocaust Museum in Washington earlier Monday afternoon, and "there's nothing comparable to it."

"It happened, and, you know, over 6 million Jewish people were murdered," she said.

The apology from the 47-year-old freshman member of Congress marked a complete reversal from her stance weeks earlier.

Greene on a podcast in May compared a mask mandate on the House floor to the Holocaust, saying, "We can look back in a time in history where people were told to wear a gold star and they were definitely treated like second-class citizens — so much so that they were put in trains and taken to gas chambers in Nazi Germany," NBC News reported at the time.

Greene made a similar comparison on Twitter days later, tweeting, "Vaccinated employees get a vaccination logo just like the Nazi's forced Jewish people to wear a gold star."

She was responding to a report from a local Tennessee news outlet about supermarket chain Food City, which said it would have fully vaccinated employees display a logo on their name badge.

Greene quickly came under fire, with House Minority Leader Kevin McCarthy, R-Calif., who had previously rebuffed pressure from Democrats to censure Greene for a variety of extreme remarks and fringe views, condemning her analogies as "appalling."

At the time, Greene had aggressively defended the remarks even in the face of heated criticism from other Republicans.

"I never compared it to the Holocaust, only the discrimination against Jews in early Nazi years. Stop feeding into the left wing media attacks on me," Greene complained to one conservative commentator in a May 25 tweet.

Greene, whose other incendiary comments had already prompted Democrats to strip her of her committee assignments, was contrite at the presser Monday afternoon.

She began by noting that her father had passed away in April. He had taught her that "when you make a mistake, you should own it," she said.

"I have made a mistake, and it's really bothered me for a couple of weeks now."

"What I would like to say is I'm removing that statement completely away from what I had said before" about the Holocaust, she said.