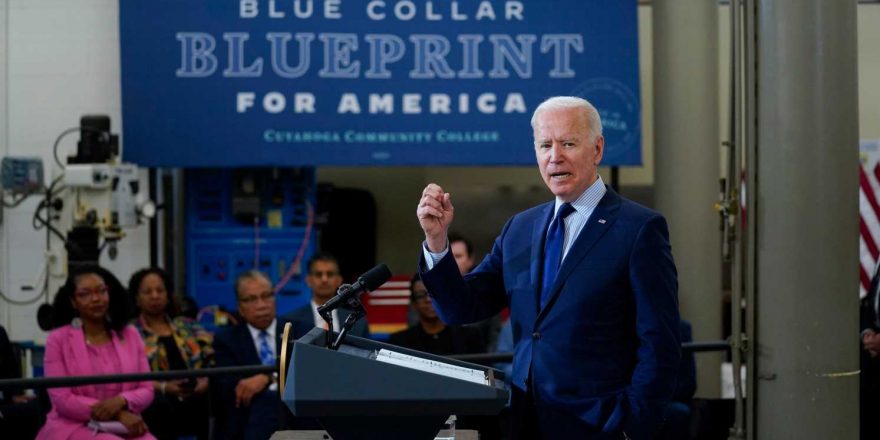 WASHINGTON – After weeks of touting the benefits of President Joe Biden’s proposed spending increases, the White House will lay out on Friday the effects on the federal debt of his first budget plan.

The plan is already giving fodder for critics, after the New York Times reported Thursday that, by 2024, debt would be larger as a share of the economy than it was during World War II.

The National Republican Congressional Committee also said it’s no surprise the proposal is being released on the Friday before a holiday weekend, when the public is less likely to be paying attention to the news.

Debt was already on pace to reach high levels, but the nation was not on pace to meet public needs on economic security for families, climate change and other areas, tweeted Seth Hanlon, a senior fellow at the Center for American Progress.

Hanlon, who was an economic special assistant to former President Barack Obama, said there’s no reason to believe that the faster debt growth under Biden’s plan would have a meaningful economic effect.

“And definitely not in relation to the (positive) effects of the policy changes,” he said in an interview.

She told reporters traveling with Biden to Cleveland – where the president touted the economic benefits of his plans – that his proposals would “put us on better financial footing over time.”

Psaki also said people should remember that Biden “inherited” $3 trillion in spending passed during the last year of the Trump administration to address the COVID-19 pandemic.

Biden has since proposed spending $4.1 trillion on infrastructure, education and safety net programs for families through what he’s calling his American Jobs and American Families plans. He wants to pay for those packages through higher taxes on corporations and the wealthiest Americans.

In an April preview of his 2022 budget request, the administration also laid how it would divide up $1.5 trillion in discretionary spending.

It was a reversal of priorities from former President Donald Trump’s budget proposals, which slashed domestic programs and asked Congress for much higher military spending.

Biden, in April, said he would be requesting a nominal increase for the Pentagon while asking for big boosts in spending on education, housing, public health, the environment and more. The administration argues that past “disinvestment” in those areas have hurt the nation’s ability to combat climate change, rebuild the economy and address racial inequities.

It will also show how his tax and spending plans would affect the nation’s finances over the next decade.

Under Trump, debt rose relative to the size of the economy even before the 2020 coronavirus spending kicked in.

An aging population, rising health care costs, compounding interest – as well as tax revenues falling short of spending commitments – were the primary drivers of rising debt before the virus, according to the Peter G. Peterson Foundation, a nonpartisan organization focused on the country’s long-term fiscal challenges.

While Biden would offset his American Families and American Jobs plans through higher taxes, the Center for a Responsible Federal Budget argues that’s not good enough.

The fiscal watchdog group said that the ten-year budget outlook should include a plan to address the structural deficits that predate the massive spending related to the coronavirus pandemic.

Republicans were already getting ready to pounce on the budget imbalance.

South Carolina Sen. Lindsey Graham, R-S.C., recently asked the nonpartisan Congressional Budget Office to calculate how much deficits would increase if Biden’s plans are not paid for. CBO estimated that the already-passed coronavirus relief package along with Biden’s new proposals would increase deficits by 48% without offsets.

Sen. Roy Blunt, R-Mo., this week said Biden’s plans add up to too much red ink.

“We have a lot of challenges in front of us that the government needs to deal with, but none of them are World War II,” he said.

Biden is negotiating with a group of GOP senators on the infrastructure component of his plans but both sides reject the other’s proposal for how to pay for it.

Biden’s full budget proposal must also go through Congress, where Democrats have only a thin majority.