Home » Politics » Pelosi trolled by pro-Trumpers with video from California district: 'Nancy Pelosi does not want you to see this'

Pelosi trolled by pro-Trumpers with video from California district: 'Nancy Pelosi does not want you to see this' 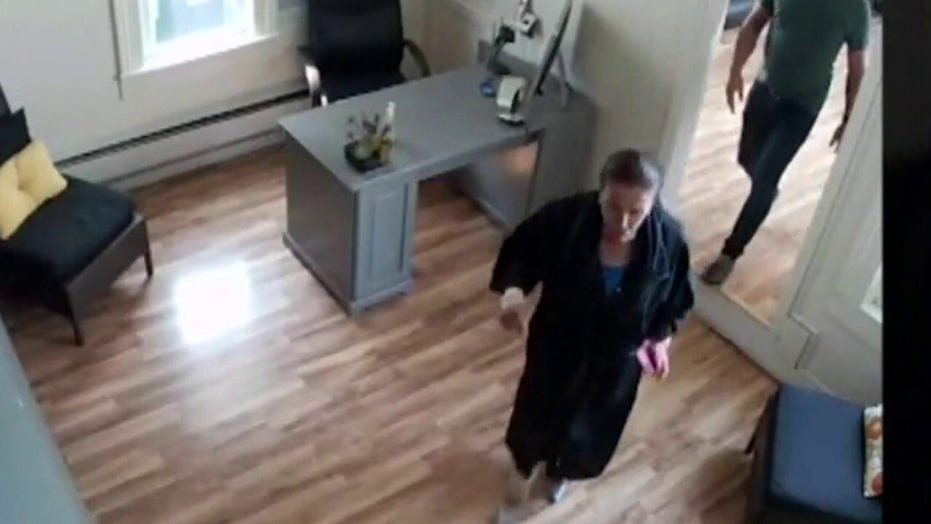 Nancy Pelosi is seen maskless after slamming Trump on masks

House Speaker Nancy Pelosi “does not want you to see this,” the Students For Trump organization claims in a new video recorded Wednesday showing the streets of her San Francisco congressional district lined with tents sheltering people experiencing homelessness.

The cellphone video was shot from the inside of a car as it drives through San Francisco’s Tenderloin District. Homeless people, many of whom are Black, are camped out on the streets for blocks. Ironically, messages like “Black Lives Matter” and “George Floyd” are seen spray-painted on a federal office building, with “The Unites States of America” official letting crossed out.

Another sign in a business’s window urges people to: “Go Vote.”

“I filmed this this morning in San Francisco,” Turning Point USA’s Chief Creative Officer Benny Johnson writes over the video. “This is the heart of Nancy Pelosi’s district. This is how people live under Pelosi’s leadership. Nancy Pelosi has been in office 33 years. Heartbreaking.”

One man in the video appears to be seen injecting a needle into his arm while sitting on the sidewalk. The car moves down Leavenworth Street, where more tents are camped out. The video shows a pipe contraption connected to a fire hydrant set up by the city, “So homeless people can take ‘showers.’”

People are seen by the encampments on bicycles, often in front of local businesses like a pizza parlor and a food market, and one man uses the fire hydrant to wash his dog. 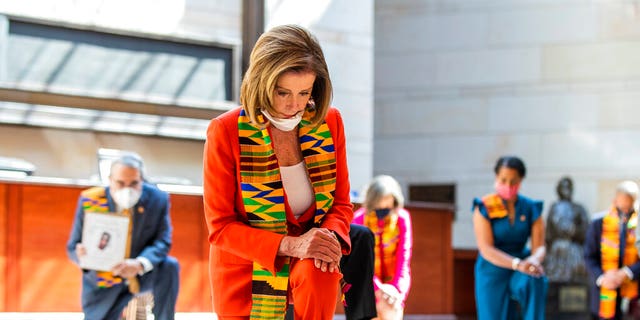 House Speaker Nancy Pelosi of California, center, and other members of Congress kneel and observe a moment of silence at the Capitol’s Emancipation Hall, Monday, June 8, 2020, on Capitol Hill in Washington, reading the names of George Floyd and others killed during police interactions. (AP Photo/Manuel Balce Ceneta)

The video ends showing a still photo of Pelosi, wearing an African kente cloth scarf, while she knelt in silence for eight minutes and 46 seconds on the marble floor of Emancipation Hall in the U.S. Capitol in June. That duration was the amount of time Minneapolis police officer Derek Chauvin kneeled on the neck of George Floyd before he died.

Over the photo, Johnson wrote: “Shame.”

Pelosi, the top-ranking Democrat in Congress and second in the presidential line of succession, has represented California’s 12th congressional district since 2013. She was first elected to Congress in 1987.

The 12th district, which was last redrawn in 2011, is entirely within San Francisco.

The video, which had more than 860,000 views on Twitter by Thursday, mirrors a political ad for Maryland Republican congressional candidate Kimberly Klacik. A speaker at the Republican National Convention who has since been endorsed by President Trump, Klacik, who is Black, challenged in her viral campaign ad that the Democrats running Baltimore for decades don’t truly care about Black lives.

“Do you care about Black lives? The people that run Baltimore don’t. I can prove it. Walk with me. They don’t want you to see this,” she said, walking through Baltimore’s crumbling infrastructure.

Pelosi has come under fire in recent days after she was caught on surveillance video first reported by Fox News at a San Francisco hair salon without a mask over her mouth and nose for a blowout. At the time, hair salons were ordered shuttered in San Francisco under rules meant to combat the spread of coronavirus.

Pelosi has since accused the eSalon owner of setting her up and demanded an apology.