Organizers Are Under Pressure To Ensure Safety Of VP Debate

Sen. Kamala Harris (D-Calif.) and Vice President Mike Pence are set to appear at an in-person debate Wednesday night, despite uproar over an outbreak of COVID-19 in the White House.

The White House announced on Friday that President Donald Trump had tested positive for the coronavirus. The revelation came just three days after Trump debated former Vice President Joe Biden in person at an event in Cleveland where debate organizers proved incapable of enforcing safety precautions.

Since then, at least 34 people in the president’s orbit have also tested positive for the virus.

This time, debate organizers will be erecting small plexiglass barriers between Harris and Pence on the stage in Salt Lake City ― something that was not done for the presidential debate.

However, health experts say those barriers are essentially useless.

COVID-19 is transmitted in tiny, aerosolized droplets capable of flying above or around the stand-alone barriers erected for the debate, which are just a few feet tall. (Harris and Pence will be seated at desks 12 feet apart.)

“Those plexiglass barriers are really only going to be effective if the vice president or Kamala Harris are spitting at each other,” Ellie Murray, a Boston University epidemiologist, told The New York Times. 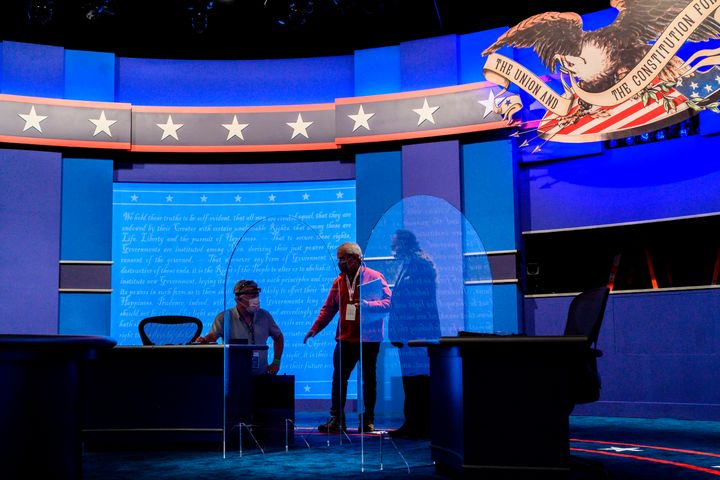 In a call with reporters on Wednesday, Biden-Harris campaign officials refused to criticize the preparations for the event ― but didn’t exactly give a ringing declaration that they feel 100% safe. They said the onus is on the Cleveland Clinic and the Commission on Presidential Debates to ensure the event’s compliance with elevated public health standards.

The Cleveland Clinic, one of the country’s premier medical institutions, is responsible for advising the debate commission on precautions during the COVID-19 pandemic and developing the debate’s unique safety standards.

On the call, Liz Allen, Harris’ communications director, also placed the burden on the presidential debate commission, which oversees the debates. 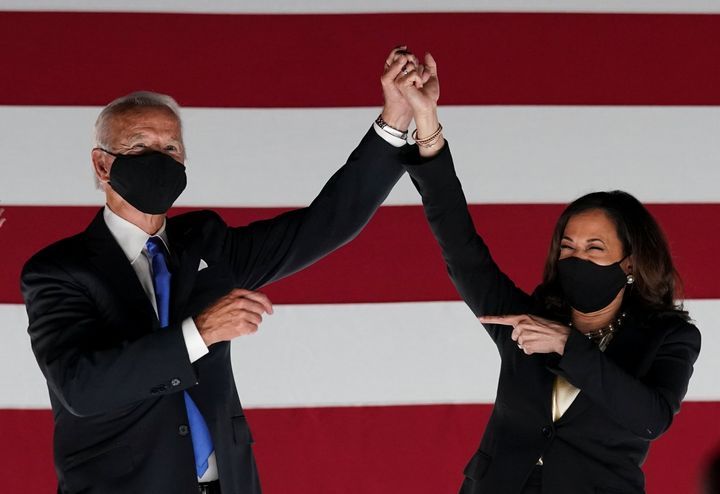 Neither the clinic nor the commission responded to a request for comment about what each group is doing to ensure Harris’ and Pence’s safety.

Both the Cleveland Clinic and the presidential debate commission have faced criticism for their roles in overseeing the safety standards in the Sept. 29 debate between Trump and Biden, the Democratic presidential nominee.

Many of Trump’s family members and guests attended the debate in person without wearing masks, in contravention of rules agreed upon before the debate. A Cleveland Clinic doctor unsuccessfully tried to get them to do so. And Trump himself arrived too late to be tested before the event began.

The Cleveland Clinic has defended its conduct, claiming that its job was to develop the rules and that it was the debate commission’s job to enforce them.

Three days later, Trump revealed that he’d tested positive for the novel coronavirus, and was subsequently hospitalized with a high fever and low oxygen levels in his blood.

Since Trump’s positive test results, Pence has tested negative multiple times, according to the White House. He has resumed campaigning for re-election across the country, notwithstanding public health guidelines recommending that people exposed to the disease quarantine for 14 days.

Asked whether the Biden campaign was concerned that Harris’ presence alongside Pence could endanger Biden in the event that Harris gets infected, Sanders, the Biden aide, said Biden and Harris are regularly tested. She noted that the Biden campaign has enforced strict health and safety protocols from the start of the pandemic, including mandatory mask wearing at all campaign events.

She also said the 12 feet of separation between Harris and Pence will be a sufficient distance to prevent disease transmission.

“We believe that we’re being safe, and we have done this all in consultation with our own health professionals and health experts,” Sanders said. “And that’s what we’ll continue to do.”

In addition, the Biden campaign sought to temper expectations for Harris’ performance against Pence.

“Vice President Pence is a formidable debater,” Sen. Cory Booker (D-N.J.) said. “And we know that tonight is a challenge, but all those who love and know Kamala have a lot of confidence in her.”

At the same time, Harris’ allies emphasized that Pence’s delivery, while more polished and polite than Trump’s, does not make his comments more accurate.

“Mike Pence may not interrupt or shout like Donald Trump did, but that does not mean he’s being more truthful,” Sanders said.

Harris plans to focus on Trump and Pence’s failure to contain the COVID-19 pandemic, emphasizing Pence’s role as head of the White House’s coronavirus task force.

But it is up to the debate moderator ― USA Today Washington bureau chief Susan Page ― and the news media to fact-check Pence, according to Sanders, who said that Harris will speak to the public directly rather than try to fact-check her opponent in real time.

“She’s not there to eviscerate Mike Pence,” Sanders said. “She’s really there to talk to people at home and break through about what they’re feeling.”