Breonna Taylor would have turned 27 today. The Louisville, KY emergency medical technician was killed on March 13 when she was shot by police, at least eight times, in her own apartment. Nearly three months later, the officers involved in her shooting still have their jobs and have not been charged with Taylor’s death. But as the country, and the world, take to the streets and demand justice for victims of police brutality and violent acts of racism—such as George Floyd, Tony McDade, Ahmaud Arbery, and countless others—efforts are being made so that Taylor’s name is not lost in the fight.

#BirthdayForBreonna is one of those efforts. Created by writer and critic Cate Young this week, the campaign is a call to celebrate Taylor on social media, demand actions be taken on her death, and ensure that she and other Black women lost to police brutality are not forgotten. (#SayHerName is an associated hashtag.) Young created a list of 10 action items supporters can follow to help, including signing a petition in Taylor’s name or donating to her family’s GoFundMe, but what’s unexpectedly gone viral is item number four: sending a birthday card to Kentucky’s attorney general and Louisville’s mayor urging that the officers who killed Taylor are held accountable.

The mail has taken on various forms, some penned with impeccable calligraphy, others with multicolored envelopes and stationaries. But don’t let the material fool you: These writers are not mincing words. “WHY have charges not been brought against the officers who killed her?” reads one postcard designed with Taylor’s silhouette. “These men are responsible for her death and must be brought to justice,” says another with font-like penmanship. 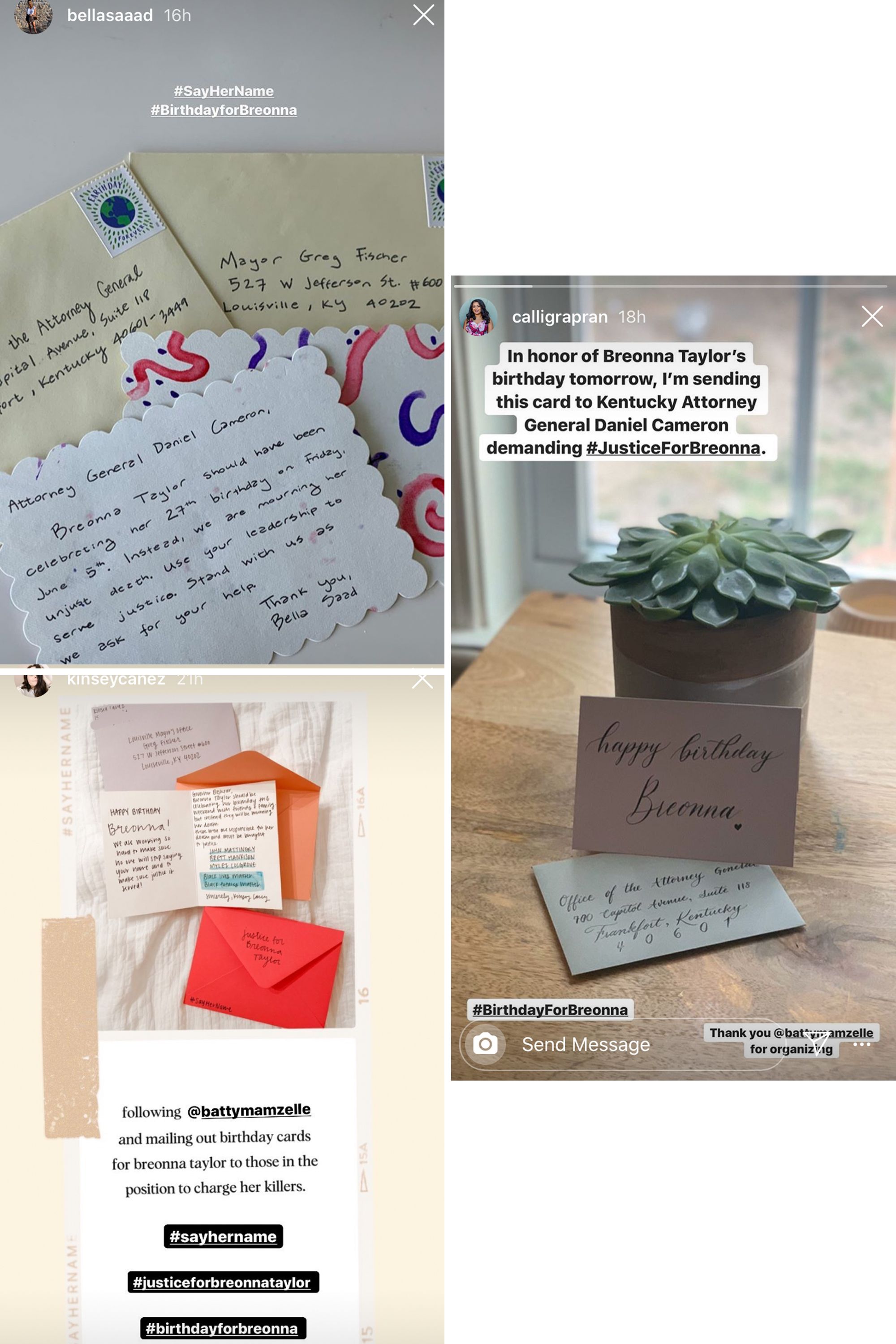 Young, who crowdsourced ideas for her multi-faceted campaign online earlier this week, first came across the suggestion of sending balloons, but transporting them to these government offices would be too cumbersome, she thought. Birthday cards would do the trick.

“I liked the idea of doing something birthday-specific because it highlights the sort of irony of [Breonna Taylor’s] birthday,” Young tells BAZAAR.com. “I decided on birthday cards because that was easy, something that people could do and would be easily accessible and the people could send through the mail.”

A millennial living in a digital world, Young also pointed out the novelty of handwriting and mailing these messages. “I think, especially for the younger generations, getting mail is kind of a thrill, so that’s part of it. I mean, in my head, I’m envisioning all of these cards, descending upon the mayor and AG, and hopefully galvanizing them to act,” she says. Young is skeptical that drastic change will occur immediately, but she hopes that the sheer number of letters will at least spark some action from those in power.

I’m envisioning all of these cards, descending upon the mayor and attorney general, and hopefully galvanizing them to act.

Young was moved to commemorate Taylor after being frustrated with how the media quickly moved on from her death. It’s a reflection of the disheartening oversight in the fight against police brutality: Black women are seldom at the forefront of the narrative.

“There’s often coverage in the beginning then they feed out of the cycle,” Young says of the dwindling coverage of Black women killed by police. “I was kind of watching [Breonna Taylor] be erased again in real time and it was just … It sucked.”

There was also a personal connection for Young: her mother and Taylor have the same birthday. “Because it was coming up so quickly, and with everything erupting around the George Floyd protests, I thought that it would be a good way to kind of galvanize people around her case and her story and to build some the momentum for her to hopefully bring her story back into the news cycle.”

With that goal accomplished as the #BirthdayForBreonna continues to spread, Young looks ahead to another hopeful outcome of the movement: that the officers who killed Taylor are arrested or charged. “I’m not naive enough to think that will actually happen,” Young says. “I know that’s not how it works in this country, but I am hoping that there will at least be immense public pressure to act.” But considering the four cops involved in George Floyd’s death have been fired and then arrested following days of protests, it may not be too late to push for action on Taylor’s behalf as well. 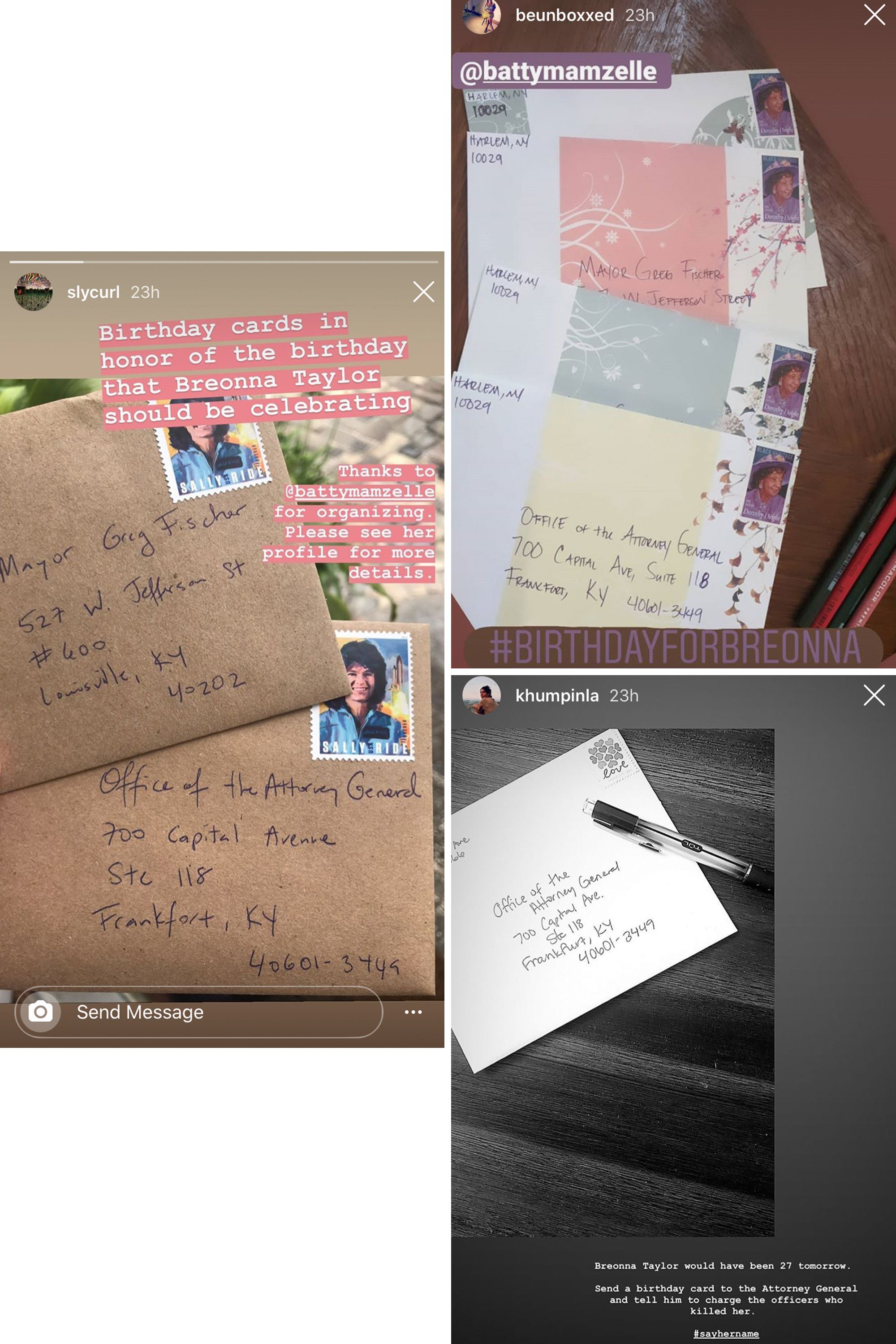 Young, who’s based in L.A., kicked off the campaign late Tuesday morning Pacific time and already started to see the movement spike later that evening. Celebrities like Megan Thee Stallion and Busy Phillips later got involved too, using the hashtag and encouraging their followers to visit Young’s site of action items. “I started getting press requests and then celebrities were getting involved and it was a little daunting, but I think that’s when I kind of realized that it’s kind of, in a good way, taken on a life of its own.”

The exposure of the campaign helped generate a flood of donations for Taylor’s official GoFundMe, which is totaled at just under $3.5 million at the time of writing. “It’s heartening to see how many people are really ready to jump in.”

Young was even impressed to see the niches the hashtag had touched. “I think there was a point in which I realized that like the calligraphers and like the craft moms had found it,” says Young. “I was like, ‘Yes!’ I’ve seen some beautiful cards that have gone out, like professional-grade stuff, which has been absolutely gorgeous [and] exciting, because those are corners of the internet that I would have been able to reach on my own.”

Calling all calligrafriends: Friday, June 5th is Breonna Taylor’s birthday. So let’s do what we do best— write on envelopes (and the card inside). Join me in writing to the Kentucky Attorney General to help Breonna receive the long overdue justice she deserves. Address your envelopes to: Office of the Attorney General 700 Capital Avenue, Suite 118 Frankfort, Kentucky 40601 So much love and gratitude to @battymamzelle for organizing this! ✍🏻✍🏼✍🏽✍🏾✍🏿 #sayhername #breonnataylor #blacklivesmatter #justiceforbreonnataylor #calligraphersforjustice #powerofthepen

A post shared by Caroline David | Calligrapher (@slingsarrowsstudio) on Jun 3, 2020 at 7:52am PDT

As the threat of coronavirus lingers, Young, who is immunocompromised, chose not to face the risk of joining the crowds at the protests, but she felt a “helplessness” and a desire to make a difference from home. “I cope best when I have work to do, so I made a bunch of work for myself and to probably feel a little less idle because I think it’s for me it’s a big hit on my mental health,” she says. “It wasn’t good for me to just be watching the news and worrying about the world burning, essentially. And even though as I can’t fix it all myself, I can certainly make a difference and feel a little more like I have some kind of control of what’s happening in the world right now.”

After days of organizing, mostly on her own but with the help of some friends and online volunteers, Young finally found time to write her own card for Breonna yesterday. But the work isn’t over. She hopes people can use the #BirthdayForBreonna movement to inspire further activism, even for causes beyond police violence.

“You can apply [these actions] to anything, any cause, it doesn’t have to be police brutality,” she says. “Find something that you’re passionate about and go out and figure out how to make a difference really on what matters to you.” 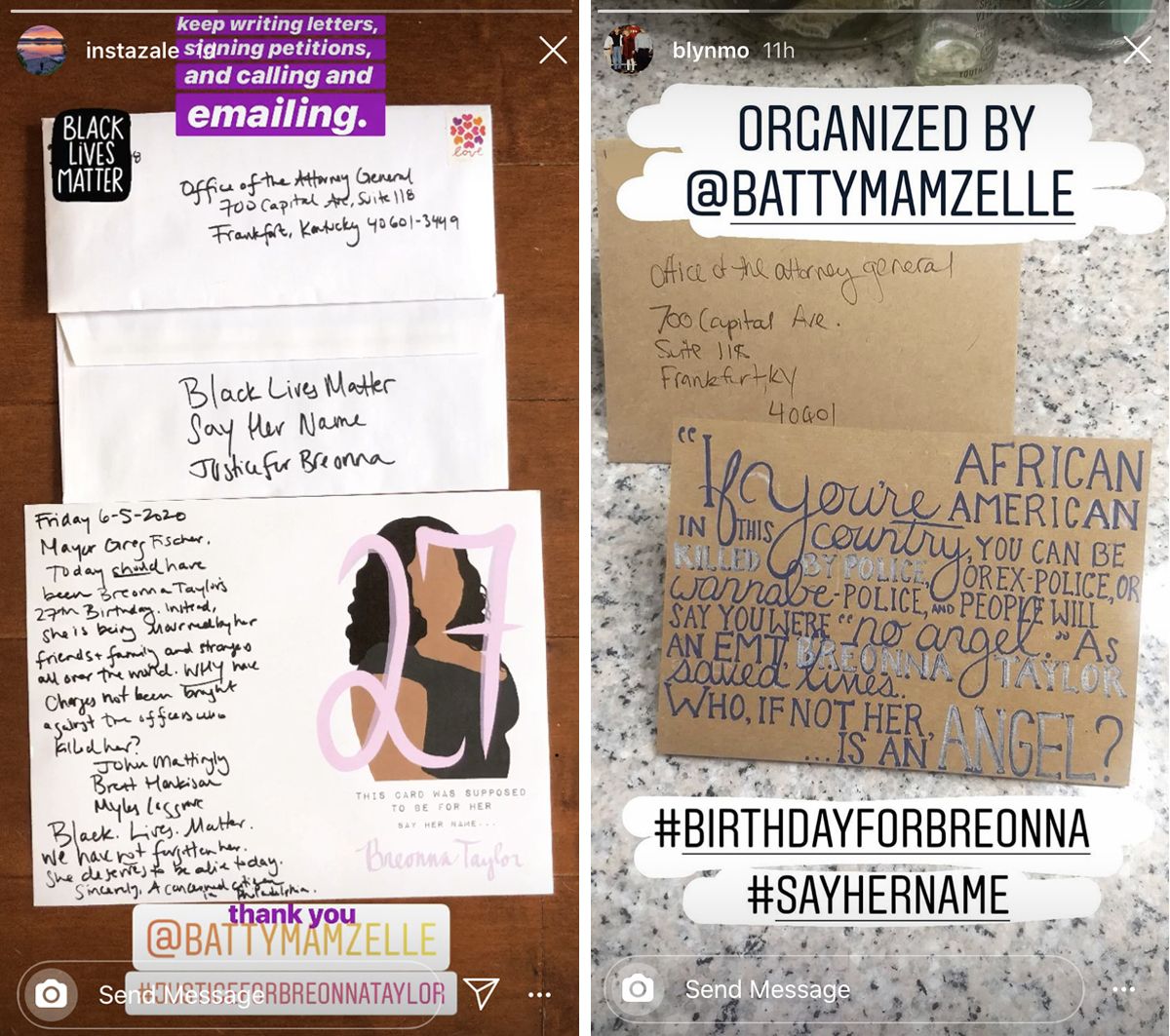 Write your own card on Breonna Taylor’s behalf:

To Mayor Greg Fischer of Louisville

Don’t have a physical card? Young suggests using Postable to purchase, customize, and address your card, and the service will print and send it for you.