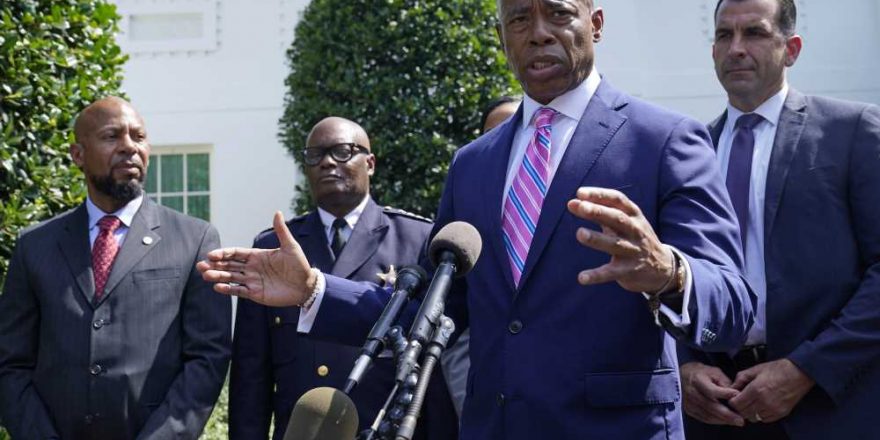 President Biden met with local mayors and law enforcement leadership to discuss violent crime and urged them to make use of federal funds available through Covid-19 relief to help combat crime in their cities.

“Our strategy provides including funding for law enforcement through the American Rescue Plan for states, cities and to be able to hire police and pay them overtime, in order to advance community policing,” Biden said.

In attendance were mayors and law enforcement leaders from major cities — including D.C. Mayor Muriel Bowser and Chicago Mayor Lori Lightfoot — as well as Eric Adams, the Democratic nominee for mayor of New York City, who blamed violent crimes on the wide availability of handguns.

A former cop and moderate Democrat, Adams ran on a tough-on-crime platform and did not endorse a model of defunding the police as some of the more progressive candidates in the mayoral race did. Even so, Adams said he doesn’t believe putting more money into policing will reduce violent crimes.

“We spend too much time looking at the role police play,” Adams told reporters gathered at the White House after the meeting with Biden. “We can’t continue to respond to symptoms. It’s time to respond to the underlying causes of violence in our city.”

Adams added, “This president is making it clear, he’s going to redefine the ecosystem of public safety. And that includes identifying the role of police, schools, families, resources, employment. This is where we need to go as a country.”

Adams encouraged the president to use Covid-19 relief money to fund education, mental health initiatives and job training programs, instead of giving more funds to the police. Biden did say that he supported funding of programs that encourage youth to “pick up a paycheck instead of a pistol.”

Crime in select cities has been rising, with many seeing elevated murder rates compared to last year. A New York Times study of crime data across 37 cities found that rates in the first few months of 2021 were 18 percent higher than the same period of time last year but noted that the FBI also made changes this year to the sources from which it collects data. Still, it’s important context that the country and many cities have experienced a long-term downward trend in violent crime rates over the past three decades. And the nationwide murder rate is still approximately half as high as it was in the early 90s when it peaked.

In a CNN interview over the weekend, Adams also said he thinks America became too focused on assault rifles used in mass shootings rather than handguns. “It is extremely important that — just as we became energetic after we saw mass shootings with assault rifles in the suburban parts of our country, which we should have — we should have also focused on the handgun,” Adams said.

He added, “The numbers of those who are killed with handguns are astronomical, and if we don’t start having real federal legislation matched with states and cities we’re never going to get this crisis under control.”

According to FBI statistics from 2019, handguns were the most common murder weapon in the U.S., followed by firearms of unknown type.

Biden has taken some executive action on guns during his administration. He signed executive orders asking the Department of Justice to regulate “ghost guns” that can be assembled from kits and tightened regulations on pistol-stabilizing braces. And on Monday, the DOJ announced it is launching five firearms trafficking strike forces in the next month to help reduce violent crime.