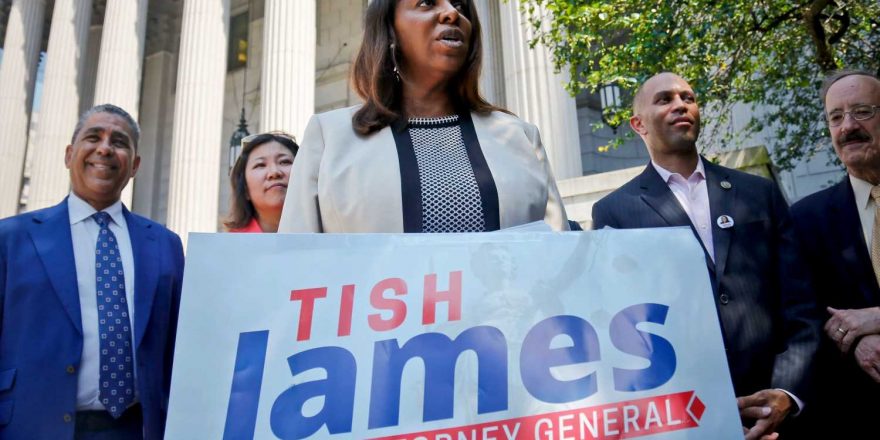 New York Attorney General Letitia James has been talking with her advisors and supporters about potentially running for governor next year, according to people familiar with the matter.

In the weeks since James' investigation into former Gov. Andrew Cuomo ended early last month, she and her political advisors have been testing the waters to see whether she would have the backing of previous donors and supporters if she opts against running for reelection and instead runs for governor.

James' name recognition within the state and beyond has skyrocketed in recent years. In addition to her investigation into Cuomo, the attorney general's office has been probing the National Rifle Association and former President Donald Trump's company, the Trump Organization.

James and her allies have been weighing the pros and cons of running in a Democratic primary for governor, some of these people added. One drawback would be giving up the powerful attorney general job.

Another potential hurdle is that the current governor, Kathy Hochul, has done fairly well in the polls and has several months to build popularity and donor support from a position of considerable power.

Luis Miranda Jr., a longtime political consultant, and the father of famed musician and producer Lin-Manuel Miranda, has been one of the people making calls to gauge support for a potential James run for governor, people familiar with the outreach said. These people declined to be named in order to speak freely about private conversations.

Miranda, according to his firm's website, was a lead consultant for James when she successfully ran for New York City public advocate.

Miranda has also been involved with the successful senate campaigns of Hillary Clinton, Chuck Schumer and Kirsten Gillibrand. Miranda was also a consultant to New York Mayor Bill de Blasio when he ran for reelection in 2017.

A spokesman for James declined to comment for this story. Miranda did not return a request for comment before publication.

James, who also goes by the name Tish, was elected in 2018. She is the first Black woman to hold the position.

James' investigation into Cuomo generated a report in August showing that at least 11 women were allegedly sexually harassed by the former governor, which he continues to deny. Cuomo resigned a week after the report was made public. Then-Lt. Gov. Hochul succeeded him to become the state's first female governor.

James has also been investigating the Trump Organization. Her office told CNBC in May that it was probing the business "in a criminal capacity" in addition to a civil investigation into the company.

James has indicated that she believes her investigations into the Trump Organization, Cuomo and the National Rifle Association have helped her build a powerful foundation for a possible gubernatorial run, according to several people who have recently spoken with her.

An August poll done by the progressive group Data for Progress shows James in the lead in terms of a preferred primary candidate, ahead of Hochul and other potential candidates. The survey's sample size was over 800 likely voters in New York, and its margin of error is plus or minus 3 percentage points.

Hochul, who said she would run, has been building a foundation of her own.

A recent Siena poll shows Hochul received a 42% favorability rating while an almost identical amount said they either had no opinion of her or didn't know enough about her. Since she became governor, Hochul has been picking up top donors throughout the state, including some who previously supported Cuomo.

There could be more competition beyond Hochul. New York City Public Advocate Jumaane Williams, a progressive, also has said he is considering running for governor. De Blasio, meanwhile, has reportedly been gauging support for a potential bid for governor.

James' attorney general campaign raised just more than $1 million in the first half of 2021. She received contributions from a group of wealthy donors, which could be of help to her if she were to jump into an election for governor.