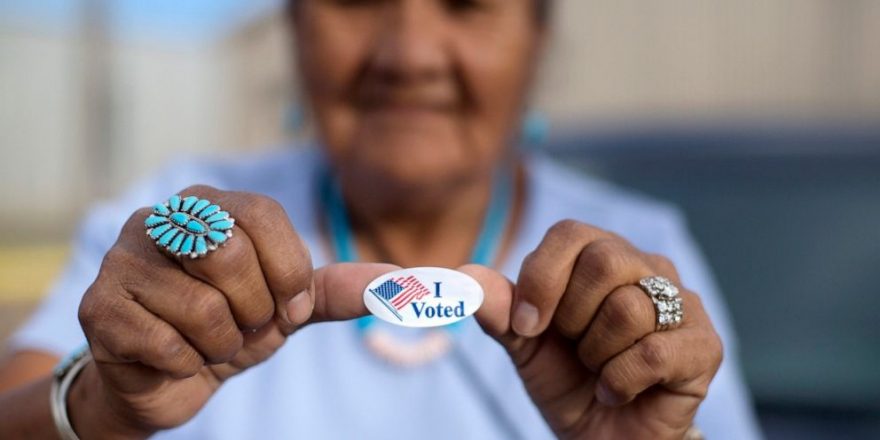 To some, the changes will make voting more difficult than it already is.

The bills, some signed into law this past week by Gov. Doug Ducey, are worrisome for Native Americans who live in remote areas, other communities of color and voters whose first language isn’t English.

One codifies the existing practice of giving voters who didn’t sign mail-in ballots until 7 p.m. on Election Day to do so, defying a recently settled lawsuit that would have given voters additional days to provide a signature. Another will result in potentially tens of thousands of people being purged from a list of voters who automatically get a ballot by mail.

“This is an assault to the election process for people of color throughout this country,” he said. “Here in Arizona, it’s pushing back on the voters of tribal communities, and we came out in big numbers to vote our candidate of choice, which is President Biden.”

The bills’ sponsor, Republican state Sen. Michelle Ugenti-Rita, said claims of retaliation or voter suppression were “outrageous” and “unfounded.” Elections aren’t a surprise, she said, and voters want them to be run efficiently with timely results.

“Not everything has to do with Biden and Trump,” she said. “These are important cleanups and fixes. It makes sense.”

Arizona is among several states controlled politically by Republicans that are tightening election rules this year, primarily around early and absentee voting. Democrats say the new rules will disproportionately affect minorities and lower-income voters. Florida, Georgia and Iowa already have enacted voting restrictions, and Texas is debating its own set of tighter rules.

In March, Biden issued an executive order creating a Native American Voting Rights Steering Group. It’s tasked with consulting with tribes nationwide to address barriers to voting, among other things.

Despite the coronavirus pandemic, voter turnout on swaths of tribal land in Arizona surged in 2020 compared with the 2016 presidential election, helping Biden to victory in a state that hadn’t supported a Democratic presidential candidate since 1996. Former President Donald Trump and a legion of his supporters have refused to accept his loss in Arizona and other battleground states, resulting in a partisan review of the ballots cast in the state’s most populous county.

The Navajo Nation sued the secretary of state and county officials in 2018 to force changes in election procedures for the tribe’s voters. The complaint alleged that more than 100 ballots cast by Navajos were rejected because they didn’t have signatures on the envelope or they had mismatched signatures.

Secretary of State Katie Hobbs agreed to insert language into the elections manual that would give all mail-in voters up to five days after an election to fix their ballots — the same as voters whose signatures don’t match the one on file.

The attorney general and Ducey didn’t sign off on the changes. The Democratic Party has since sued seeking a five-day curing period for mailed ballots. A U.S. District Court judge initially agreed, but the decision was challenged. Oral arguments are scheduled for July in federal appeals court.

Nez said the ballot signature measure just signed into law undermines the settlement in the tribe’s lawsuit. It is evaluating the language and has not yet decide on its next step.

“We have to deal with the federal government on broken promises. Now we have the state breaking promises on a settlement we thought we all agreed upon,” Nez said.

The secretary of state doesn’t have final say over the elections manual, and Ugenti-Rita said promises shouldn’t have been made that couldn’t be kept. She said the Navajo Nation’s anger is wrongly directed at the Legislature.

Before the pandemic, Native Americans made voting a social event on many reservations. It was one of the few times a year where they’d meet with old friends and chat about the government, community needs and their families. Tribal leaders give voters time off to cast a ballot and help get others to the polls. Campaigns courted voters with traditional food.

Even when they receive mailed ballots, many Native Americans prefer to drop them off on Election Day at their polling site, no matter how distant. Unless poll workers check for a signature on the spot, voters would have no chance to fix it.

Patty Hansen, the recorder in the state’s largest county by size, said she’s disappointed with the new law because it treats voters differently based on the error they’ve made.

“We were headed in the right direction,” she said. “Now it’s being reversed.”

Submitting mailed ballots earlier without a signature could mean an hours-long trip to make the fix, said Democratic state Rep. Jasmine Blackwater-Nygren, who is Navajo. The new law says county officials have to make a reasonable effort to contact voters. Blackwater-Nygren said that could be problematic if Navajo translators, for example, aren’t available.

The other change in Arizona affects the list of voters who automatically receive a mailed ballot. Voters who sit out all elections — municipal, primary and general — for two election cycles will be mailed a notice asking if they want to remain on what had been known as the permanent early voting list.

If they respond, nothing will change. If they don’t respond within 90 days, they will be dropped from the list but will remain a registered voter.

They can rejoin what will now be called the active early voting list at any time, request a mailed ballot for a single election or vote in person. But a ballot won’t automatically arrive in their mailboxes.

About 75 percent of registered voters in the state are on the early voting list. That includes some 38,000 Indigenous people, most of whom are concentrated in the competitive but Democratic-leaning 1st Congressional District. The district takes in several tribes in the northern and and eastern parts of the state, including the Navajo Nation.

Voter rolls regularly are purged elsewhere, including on the Navajo Nation, but advocates contend the change will result in more people being disenfranchised.

Blackwater-Nygren said she often hears from Republicans that tribal members know what to expect when it comes to voting. That’s true, she said, but the vast distances, spotty phone service and lack of home mail delivery on some reservations also pose challenges not found elsewhere.

“We’re saying we don’t have the same access to polling locations, and that message seems to get lost,” she said.