As the GOP works to recapture the Senate majority in next year’s midterm elections, longtime Senate Republican leader Mitch McConnell is making it crystal clear what he thinks of former President Trump’s relitigating of his 2020 election loss to President Biden.

“I do think we need to be thinking about the future and not the past,” McConnell told reporters on Capitol Hill on Tuesday when asked if he was comfortable with his party’s embrace of the former president.

“I think the American people are focusing on this administration, what it’s doing to the country, and it’s my hope the ’22 election will be a referendum on the performance of the current administration, not a rehash of suggestions about what may have happened in 2020,” the Republican from Kentucky emphasized. 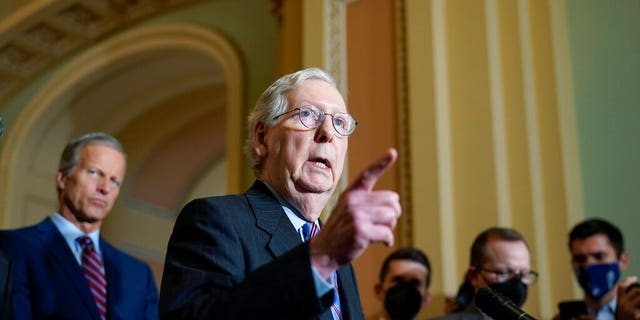 Republicans need a net gain of just one seat in next year’s midterms to regain the majority they lost in January, when they were swept by the Democrats in the twin Georgia runoff elections.

And the GOP sees a conducive political climate, with President Biden’s approval ratings underwater in the wake of criticism of his handling of the turbulent U.S. exit from Afghanistan, the sudden rise in COVID-19 cases this summer, the latest surge of migrants trying to cross into the U.S. along the southern border with Mexico, and the rise in inflation.

But some in the GOP are concerned that Trump’s obsession with his 2020 election loss to Biden will be a drag on their efforts to win back both houses of Congress.

Nine months removed from the White House, Trump remains very popular with most Republican voters and extremely influential with GOP politicians, as he continues to play a kingmaker’s role in party politics and teases another presidential run in 2024. But he also repeatedly makes unfounded claims that the 2020 election was rampant with “massive voter fraud” and “rigged.” And the former president continues to push for election audits in numerous states across the country.

Trump spent much of nearly two hours of comments at his most recent rally – a week and a half ago in Iowa – and at a closed-door speech last week at a donor retreat hosted by the National Republican Senatorial Committee, the reelection arm of the Senate Republicans, relitigating his election defeat.

While McConnell once again took aim at Trump without naming the former president, Trump continues to blast McConnell — by name.

At the Iowa rally, Trump lashed out at McConnell, charging the Senate GOP leader didn’t “have the courage” to support Trump’s unsuccessful attempts to overturn the 2020 election results.

McConnell voted in February to acquit the former president, who was impeached on one count of inciting the Jan. 6 insurrection at the U.S. Capitol by right-wing extremists and other Trump supporters aiming to disrupt congressional certification of Biden’s Electoral College victory.

But McConnell assailed Trump in a speech on the Senate floor minutes after the trial concluded, saying that the former president “bears moral responsibility” for the storming of the Capitol. A war of words between the two GOP leaders continues to present day.