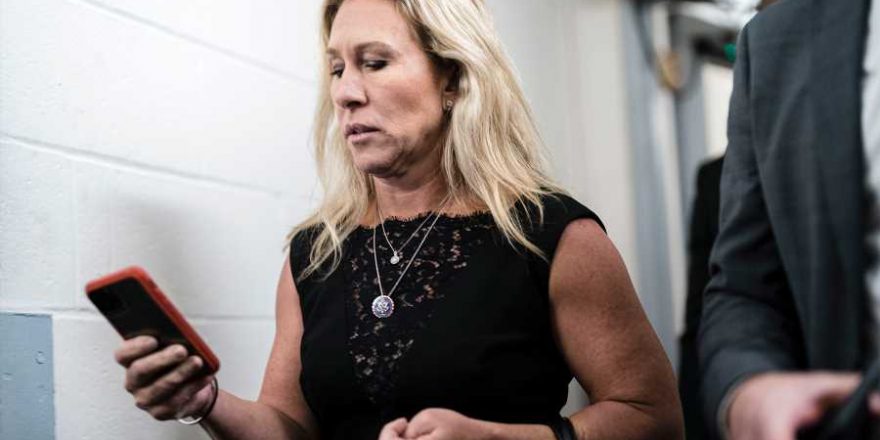 Mark Meadows texted with Trump’s family, Jan. 6 rally organizers, right-wing media personalities, and over 40 Republican members of Congress between Election Day and President Biden’s inauguration just over two months later, CNN reported on Monday. The messages, which have been obtained by the Jan. 6 committee, make clear that the former chief of staff was the Trump administration’s point person for the effort to overturn the results of the 2020 election, and that the effort extended throughout the Republican Party.

One of the dozens of GOP lawmakers communicating with Meadows during the time between the election and the inauguration was Marjorie Taylor Greene, the conspiracy theorist from Georgia who just last Friday testified under oath about her alleged role in the events of last Jan. 6. Greene, who has repeatedly defended those who stormed the Capitol, appeared to have done so on the morning of Jan. 7, as well.

Elizabeth Warren Torches Kevin McCarthy as 'a Liar and a Traitor'

Jan. 6 Committee Findings Are So Explosive They Will 'Blow the Roof Off the House,' Rep. Jamie Raskin Says

“Yesterday was a terrible day. We tried everything we could in our objection to the 6 states. I’m sorry nothing worked. I don’t think that President Trump caused the attack on the Capitol. It’s not his fault,” she wrote. “Absolutely no excuse and I fully denounce all of it, but after shut downs all year and a stolen election, people are saying that they have no other choice.”

Greene later advocated for President Trump to institute martial law in order to stay in office. “In our private chat with only Members, several are saying the only way to save our Republic is for Trump to call for Marshall [sic] law,” she wrote on Jan. 17. “I don’t know on those things. I just wanted you to tell him. They stole this election. We all know. They will destroy our country next. Please tell him to declassify as much as possible so we can go after Biden and anyone else!”

Greene on Friday testified under oath that she could “not recall” discussing martial law. She gave similar responses about several questions pertaining to Jan. 6.

Greene was also texting Meadows as the attack was in progress. “Mark I was just told there is an active shooter on the first floor of the Capitol Please tell the President to calm people This isn’t the way to solve anything,” she wrote.

This, too, appears to contradict her testimony on Friday. “We were so confused,” she said under oath, speaking about when she was first made aware that the building had been breached. “We thought antifa was breaking in, or BLM.”

Greene wrote Meadows later last Jan. 6 that “we don’t think these attackers are our people” and that she believed they were antifa members “dressed like Trump supporters,” but the texts make clear that when when the situation was first developing she believed Trump would have sway over the rioters.

Rolling Stone reported last October that Greene was one of several members of Congress who participated in the planning of the rally near the White House that preceded the riot. She also appears to have been involved in the larger administrative effort to overturn the election results. “Good morning Mark, I’m here in DC,” she wrote on Dec. 31. “We have to get organized for the 6th. I would like to meet with Rudy Giuliani again. We didn’t get to speak with him long. Also anyone who can help. We are getting a lot of members on board. And we need to lay out the best case for each state.”

Greene’s testimony on Friday came as part of a case brought by a group seeking to disqualify her from office for violating the 14th Amendment, which states that if someone took an oath to defend the Constitution and then “engaged in insurrection or rebellion,” they can’t serve in Congress.