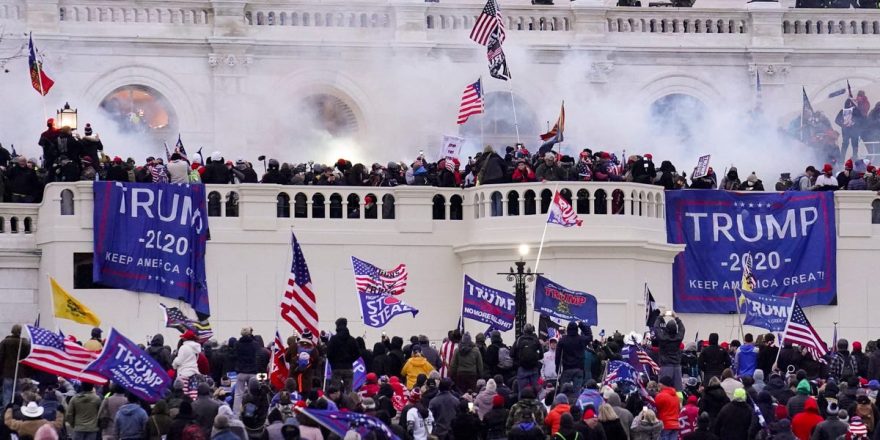 A New Jersey man accused of “repeatedly assaulting multiple law enforcement officers” during the January 6 Capitol insurrection has been arrested and charged in relation to his participation in the attack, months after his internet search history suggests he was worrying about that very outcome.

Christopher Joseph Quaglin was arrested Wednesday on charges of assaulting, resisting, or impeding certain officers or employees, civil disorder, and obstruction of official proceeding, according to the US Justice Department.

Quaglin appeared virtually in federal court Wednesday where a judge decided to release him on house arrest, according to NJ.com.

In court documents, authorities say Quaglin participated in the Capitol siege in Washington, DC, where he helped lead the charge into the building and assaulted numerous officers during the process, including attacking authorities with a stolen riot guard and spraying a “chemical irritant” at officers trying to stop the break-in.

Dressed in a red, white, and blue shirt, a black helmet with a camera attached, and a gas mask, Quaglin was easily identifiable in video footage from that day, which authorities say shows Quaglin assaulting both Capitol police officers and Metropolitan Police Department officers multiple times in various locations throughout the afternoon.

Before rioters breached the building, Quaglin can be seen on officer body worn camera footage approaching the police line separated by a fence and starting to engage with officers “seemingly unprovoked,” court documents said.

In another video, Quaglin can be seen shoving an officer holding the perimeter, documents said. Surveillance footage reportedly shows Quaglin engaging with an officer while appearing “increasingly agitated and pointing his finger,” before proceeding to “hold and push” the officer by the neck, which appears to contribute to the officer starting to fall.

Quaglin is also accused of spraying a chemical irritant at officers who were trying to stop the rioters from entering the Capitol, court documents say.

After the insurrection, law enforcement agents say they received a tip from an anonymous source who provided Facebook Live videos of the riot from Quaglin’s Facebook account, which was named “Chris Trump.”

The witness told authorities that Quaglin frequently posted on his social media accounts about the 2020 Presidential election and about going to the Capitol on January 6. According to legal records, many of Quaglin’s posts from the Capitol were deleted on January 7.

But that didn’t stop Quaglin from publicly planning his involvement prior to the attack or boasting about it immediately following the event.

In the aftermath of Joe Biden’s November victory, Quaglin reportedly sent a slew of Facebook messages to other accounts hinting at his eventual involvement in the attack.

“I’m going to war…I’m writing my letter to my wife and people will have it…But I might not even make it back,” Quaglin reportedly wrote on Facebook in November. “It’s over…I’m fighting if not…like on the streets in dc. Full body armor.”

In a video taken from his hotel room following the January attack, authorities say Quaglin said: “I’ve been pepper sprayed like twenty f—ing times, I’m sure I’m going to make the news.”

Authorities investigated Quaglin’s Google account history after the riot and found a search for “guy gets bear sprayed at capital” made on January 8. On January 20, his history shows visits to a web page titled, “Countries where you can buy citizenship, residency, or passport.”