New York (CNN Business)Will Peacock have a content library and a price point colorful enough to stand out among its streaming rivals? We’re about to find out.

NBCUniversal will showcase its new streaming service at an event in New York on Thursday, unveiling it to the media and investors with a presentation in Studio 8H — the home of “Saturday Night Live.” NBCUniversal even went as far to construct a giant topiary in the shape of peacock outside of 30 Rockefeller Plaza for the occasion.
The Comcast (CMCSA)-owned company is keeping a tight lid on what exactly the event will reveal, but if it’s anything like the presentations for Disney+ and HBO Max, it will give consumers a clear launch date for the service (it’s scheduled for April) and what it will offer in terms of pricing and content.

Peacock is debuting in the middle of the streaming wars which has media companies like Disney and WarnerMedia, CNN’s parent company, competing with the likes of Netflix (NFLX) and Amazon (AMZN). Like its rivals, Peacock will be competing for your time, money and attention. The streaming service’s biggest pitch so far is that it relies heavily on easily digestible sitcoms and TV comedies, which have become popular fodder for streamers in recent years.
The service will host classic comedies like “30 Rock,” “Cheers,” “Frasier” and every season of “Saturday Night Live.” It will also be the exclusive streaming home for popular sitcoms like “Parks and Recreation” and “The Office.” The mockumentary starring Steve Carrell has been a viewership juggernaut for Netflix and will leave the service for Peacock in 2021.

The Universal part of NBCUniversal will also have a presence on Peacock.
Blockbusters from Universal Pictures such as movies in the Fast & Furious and Jason Bourne franchises will be on the service. So will classics like “Jaws,” “E.T. the Extra Terrestrial,” “Field of Dreams” and “Back to the Future.” Peacock will also have content for kids from DreamWorks Animation such as “Shrek” and films from the Despicable Me franchise.
There will be an original crime series called “Dr. Death” starring Alec Baldwin and “Brave New World,” another original series, this one starring Demi Moore based on Aldous Huxley’s dystopian novel. Reboots of old favorites like “Saved By the Bell” and “Battlestar Galactica” will also live exclusively on the service.
Other reports stated that the service could also include “The Tonight Show with Jimmy Fallon,” which users may be able to watch clips of before its 11:35 PM air time. It could also include NBC News and the 2020 Summer Olympics.
Peacock’s price tag might help the streaming service differentiate itself from its competitors.
NBCUniversal has not yet disclosed how much Peacock will actually cost, but the company said that the service will be supported by both advertising and subscription models. Some reports say that version with ads could be free to users and others report that an ad-free option would run at $10 per month — a little more than Disney+ and Apple TV+ but a little less than Netflix.
NBC Universal declined to comment on the plans for Peacock. 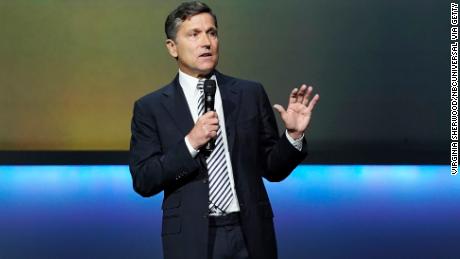 Behind the scenes, Peacock and NBCUniversal have gone through some executive shifts since announcing the service last September.
Bonnie Hammer, NBCUniversal’s former chairman of direct-to-consumer and digital enterprises, who was overseeing the launch, shifted to a new role as chairman of NBCUniversal Content Studios in October. Most notably, Steve Burke, NBCUniversal’s CEO, announced in December that he was stepping down to a chairman role on January 1 and would retire in August. Jeff Shell, the chairman of NBC’s film and network TV businesses, stepped in for Burke and will now lead the company into its new streaming era.
Burke noted in October that the most important thing to consider when thinking about Peacock is that the company is “not doing the same strategy” as Netflix, which runs on an ad-free subscription model.
“We’re primarily working with the existing ecosystem and doing a lot of [advertising-supported video on demand] activity,” he said during an October earnings call.

The service could play to fact that the company’s is part of Comcast, which is “the biggest provider of television advertising in the United States,” he added.
“The product is beautiful and very different,” Burke told analysts. “I think something that we’re all going to be very proud of when we launch in April.”
Source: Read Full Article