Conspiracy theorist and far-right talk radio host Alex Jones, who has promoted Donald Trump to his audience extensively for years, is heard in a newly leaked video expressing disgust at the former president in 2019.

“It’s the truth, and I’m just going to say it. That I wish I never would have fucking met Trump,” Jones says in the footage. “I wish it never would have happened. And it’s not the attacks I’ve been through. I’m so sick of fucking Donald Trump, man. God, I’m fucking sick of him. And I’m not doing this because, like, I’m kissing his fucking ass, you know. It’s, like, I’m sick of it.”

Filmmaker Caolan Robertson, who shot a propaganda film called “You Can’t Watch This” with the Infowars host, leaked the footage to the Southern Poverty Law Center’s Hatewatch initiative, which monitors far-right extremism in the U.S.

Robertson told Hatewatch that Jones asked him to discard the footage, which he said was shot in January 2019 in Austin, Texas. He provided text messages between him and Jones corroborating his account. 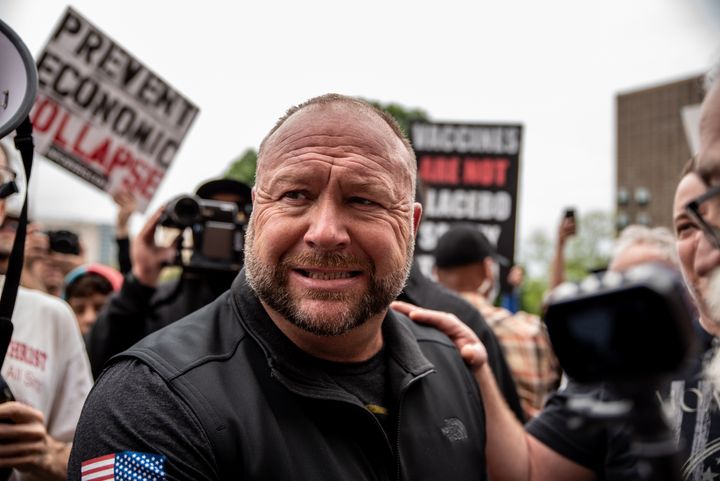 Robertson shared the footage to expose how Jones is exploiting Trump’s supporters and his audience, he told the group. During that same shoot, he recalled, Jones bragged about making tens of millions of dollars in 2018 and mocked his audience, claiming they would “buy anything.”

Indeed, Jones has filled his pockets by spreading fear and conspiracy theories, and by selling products that capitalize on them. He has publicly been a fervent supporter of Trump, whom he interviewed in 2015, throughout the course of his campaigns and presidency. In 2018, when Jones was banned from Twitter, Trump showed implicit support for him as he railed against the silencing of conservative voices. Jones claimed at the time that he was advising the president.

On Jan. 6, Jones hyped up the crowd at Trump’s “March to Save America” rally in Washington, D.C., before attendees went on to stage a deadly insurrection on the U.S. Capitol. The FBI and Justice Department are investigating whether Jones and other right-wing figures may have played a role in inspiring the riot, according to The Washington Post.

Robertson, who has worked closely with many far-right provocateurs, went viral himself in 2017 after he was filmed giving a racist and vitriolic speech following the Westminster Bridge terrorist attack in London. He has since tried to rehabilitate his image. He told Hatewatch he is working to undo the damage he did while working with extremists like Jones.

Infowars did not immediately respond to HuffPost’s request for comment.