Kristi Noem governs a state that’s about 1,500 miles away, but the South Dakota Republican appeared to be a big hit with North Carolina’s GOP at their convention on Saturday, according to reports.

One reason was Noem’s criticism of Dr. Anthony Fauci, the infectious disease expert who has been a target of many Republicans, according to the North State Journal of Raleigh, N.C.

“Fauci is wrong – a lot,” Noem told the audience in Greenville. The line drew strong applause, according to the newspaper.

To make her point, Noem claimed Fauci had told her once that South Dakota would need 10,000 hospital beds when the coronavirus reached its peak in the state. Turns out, she said, that South Dakota needed only 600 beds when infections hit their highest point.

Her latest criticism of Fauci coincides with new scrutiny of the 80-year-old director of the National Institute of Allergy and Infectious Diseases following a recent disclosure that U.S. dollars helped fund China’s Wuhan Institute of Virology, a suspected epicenter of the coronavirus outbreak.

Noem drew scorn from the mainstream media during the worst days of the pandemic for her opposition to state-ordered coronavirus restrictions. Last April, an outbreak at one South Dakota meat plant was linked to more than half of the state’s infections.

But the governor repeatedly said she trusted residents and business owners to make their own safety decisions for themselves, their families and their workplaces.

“We never closed a business, issued a shelter-in-place or mask mandate,” Noem told the North Carolina crowd, according to the North State Journal.

“We never closed a business, issued a shelter-in-place or mask mandate.”

The governor also praised former President Donald Trump, who addressed the convention later in the evening.

“I love that man because he did everything he said he was going to do,” said Noem, who was a member of Congress during the first half of Trump’s term. 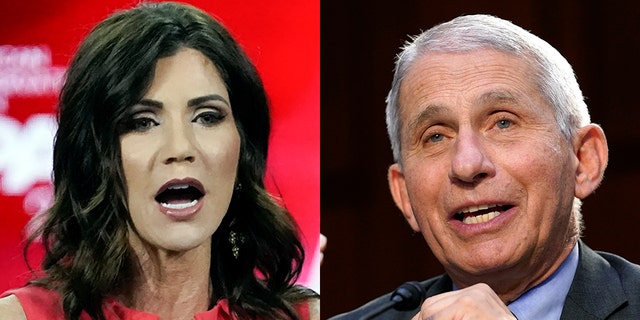 While serving on Capitol Hill, Noem worked with many of North Carolina’s GOP lawmakers, she told the audience – but noted that North Carolina voters had sent Democrat Roy Cooper to the governor’s office.

“You guys elect some great representatives but terrible governors,” she joked, again drawing a loud reaction.

Noem, 49, has brushed off reports that she’s a potential candidate for the GOP’s presidential nomination in 2024. But political observers have noted that she’s scheduled to speak in Iowa on July 16 and earlier this month headlined a New Hampshire gathering of the “Right of Center” activist group.

Last Thursday, Noem appeared on “Fox & Friends,” where she vowed to appeal a court ruling that upheld the Biden administration’s decision to cancel July 4 fireworks at Mount Rushmore in her state.

“This is part of the radical left’s agenda,” she said. “They don’t want to celebrate America or our freedoms. They’re pushing critical race theory. They’re pushing the 1619 Project. And this is just another one of those battles to erase our true, honest and patriotic history in this country.”