Kenosha, Wisconsin Cops Shoot Black Man In The Back 7 Times In Broad Daylight

KENOSHA, Wis. (AP) — Neighbors confronted law enforcement at the scene of a police shooting in Kenosha, Wisconsin, on Sunday that drew a harsh rebuke from the governor and prompted crowds to march in the streets after a video posted on social media appeared to show officers shoot at a man’s back seven times as he leaned into a vehicle.

Kenosha Police said a person was hospitalized in serious condition following a shooting by officers about 5 p.m. as police were responding to a “domestic incident,” the Kenosha Police Department said in a news release. Police did not provide details about what led to the shooting or the officers involved, but said the person was transported to a hospital in Milwaukee for treatment.

In the video posted on social media that appeared to show the shooting from across a street, three officers could be seen shouting and pointing their weapons at the man as he walked around the front of an SUV parked on the street. As the man opened the driver’s side door and leaned inside, one officer grabbed his shirt from behind and then fired into the vehicle. Seven shots could be heard on the video, though it was unclear if more than one officer fired.

Following the shooting, social media posts showed neighbors gathering in the surrounding streets and hurling comments at police. Some could be heard chanting, “No justice, no peace.” 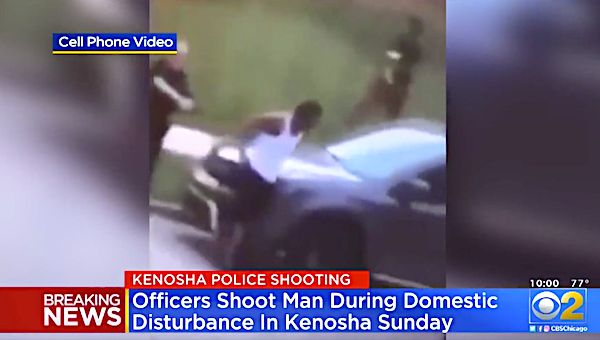 Later Sunday, in a scene that mirrored the months of protests over racial injustice around the world that have followed the deaths of George Floyd, Breonna Taylor and other Black people killed by police, marchers headed to the Kenosha County Public Safety Building, which authorities had mostly blocked off. Protesters marched along lines of cars honking on their way to the station and eventually made their way to the rear parking lot. A man could be seen breaking the window of a patrol car parked along the street. Some police officers were positioned on the roof of the station as people continued toward the building

Outside the station, protesters faced off with officers who were dressed in riot gear that included plastic facemasks and held plastic shields and batons that they occasionally used to push people back.

Gov. Tony Evers on Sunday night released a statement on Twitter condemning the shooting of a man who “was shot in the back multiple times, in broad daylight” and whom he identified as Jacob Blake.

Kenosha Police referred all questions to the Wisconsin Department of Justice, which did not immediately respond to messages seeking to confirm details of the shooting video.

The Kenosha Sheriff’s Department and Wisconsin State Patrol were requested at the scene so another law enforcement agency could take over, police said in the news release.

The city of Kenosha is located on Lake Michigan, about 40 miles (64.37 Kilometers) south of Milwaukee.

A Kenosha Police Department dispatcher referred calls by The Associated Press to the Wisconsin Department of Justice, the agency that will be investigating the shooting. A message left with DOJ was not immediately returned.