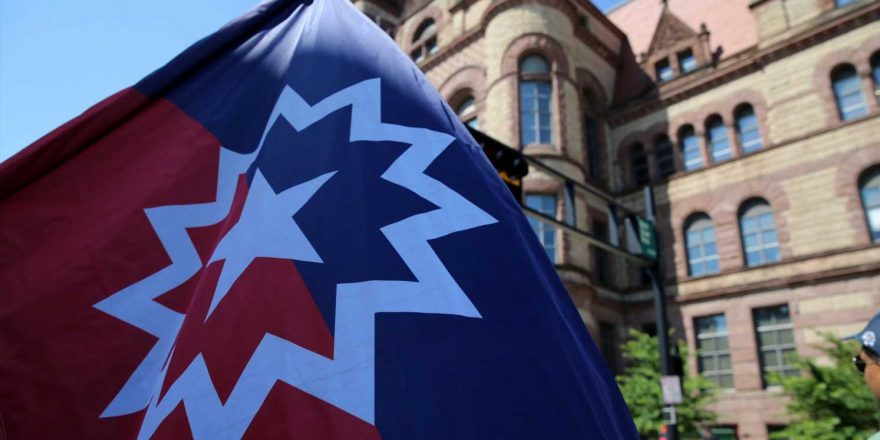 In the wake of 2020’s racial reckoning over the killings of George Floyd, Breonna Taylor and Ahmaud Arbery, the celebration of Juneteenth spread outside the African American community.

A year later, Juneteenth comes as Congress struggles to pass sweeping legislation that would protect the rights of voters of color and the George Floyd Justice in Policing Act, which bolsters police accountability.

The day also drops into a culture war, as state legislatures attempt to ban school discussions of the long-lasting effects of slavery, systemic racism and critical race theory.

A decades-long push to make the day a federal holiday continues. But Juneteenth’s increasing popularity coincides with a concentrated effort to limit public relearning of precisely what it asks America to remember: how the nation’s early history of enslaving African Americans affects current legislation that restricts voter access and marginalizes voters of color.

The city of Cincinnati, for the first time in its history, raised the Juneteenth Flag on June 19, 2020, at City Hall. (Photo: Kareem Elgazzar/The Enquirer)

Juneteenth is recognized with some form of observance in every state plus the District of Columbia, except for South Dakota.

“As it [Juneteenth] takes on a more national and even global perspective, the events of 1865 in Texas are not forgotten, for all our roots tie back to this fertile soil from which a national day of pride is growing. This is why we must establish the Juneteenth Independence Day, as a national holiday,” Jackson Lee said in a statement at the time. The bill has neither passed in the House nor the Senate.

Opal Lee, a 94-year-old Texas native, also has spent years advocating for Congress to enact legislation making Juneteenth a federal holiday. In 2016, Lee walked the 1,400 miles from Fort Worth, Texas, to Washington to push for the legislation. Each day, Lee walked two-and-a-half miles to symbolize the two-and-a-half years it took for enslaved people in Texas to be informed of Lincoln’s Emancipation Proclamation.

Andrew J. Torget, a historian of 19th century North America at the University of North Texas, said Juneteenth’s celebration is a testament to the will of the American people to honor the end of slavery.

“It’s important that we have a moment that is now becoming a national moment, not because of legislation, and not because anyone has decreed it. But because large swaths of the American public are embracing it,” Torget said.

He grew up in Texas but wasn’t taught about Juneteenth while in school. It wasn’t until college that he learned more.

“I think we’ve come a long way with just celebrating Juneteenth and having that public discussion. And I love personally that every year we’re having a discussion about the end of slavery that wasn’t true when I was a kid growing up,” Torget said. “I had to go to graduate school and study the South at the University of Virginia to understand that.”

What we get wrong about Juneteenth

Contrary to popular narrative, Lincoln’s Emancipation Proclamation did not liberate all enslaved people in the United States at the same time. The proclamation only applied to secessionist states that were fighting against the Union during the Civil War.

Slavery was abolished in America with the passage of the 13th Amendment on Jan. 31, 1865, and its ratification on Dec. 6, 1865. But for the enslaved, the ending of slavery was far more complicated.

“The timeline of ending slavery is a little awkward because it ends in different places at different times. Abraham Lincoln announces the Emancipation Proclamation January 1, 1863. It frees nobody immediately,” said Torget, whose book “Seeds of Empire: Cotton, Slavery, and the Transformation of the Texas Borderlands, 1800-1850” explains how slavery was central to the origins of Texas.

“But as Union armies make their way to the South, freedom starts coming with the Union armies. It’s really the passage, of course, of the 13th Amendment in early 1865 that brings a legal end to slavery, but that means nothing if you don’t finish the war.”

“In June of 1865, there was still this one very large pocket of enslaved people in the Confederacy that had not been liberated. Because we’ve never had armies that really marched through Texas the way they did in the rest of the country,” said Cotham.

But “it would take battlefield success and the movement of the armies and navies, to finally gain control over the Confederacy and be able to enforce emancipation. Juneteenth is kind of the culmination of that process,” Cotham said.

The narrative of Juneteenth heavily focuses on Granger issuing the order. But Cotham said, and wrote in his book “Juneteenth: The Story Behind the Celebration,” that the general actually had very little to do with the order.

It was Union Gen. Philip H. Sheridan who instructed Granger to issue it and abolitionist Maj. Frederick W. Emery, Granger’s assistant adjustant general, who drafted, issued and signed the order with Granger’s approval.

“He wrote this section of the Juneteenth order that talks about the free people now having absolute equality. And that was kind of way ahead of his time and way ahead of even where Lincoln had been at the Emancipation Proclamation,” Cotham said.

Emery’s language declared “all slaves are free” and redefined the relationship between the enslaved and their owners to one of employer and “hired labor.”

“We need to honor people that suffered in bondage all those years, and we need to continue to remind the country about the pains that we’ve experienced so we can try to avoid going back to them,” said Bledsoe.

But he notes other state actions dilute the holiday’s meaning.

While Texas was the first state to recognize Juneteenth as a state holiday, it also commemorates Confederate Heroes Day. The holiday celebrates confederate soldiers such as Jefferson Davis and Robert E. Lee.

And recently, House Democrats in Texas walked out of the state capitol to block passage of Senate Bill 7, which would limit certain ways of voting. Critics say the bill disproportionately affects people of color.

Democrats walked out of the Texas State House on Sunday night, to block one of the most restrictive voting laws in the US from passing before a midnight deadline. GOP Governor Greg Abbott said he'll order lawmakers back for a special session. (May 31)

“To be very honest we have continued to have voter suppression laws, introduced every session, even when it was a Democratic-controlled legislature,” said Bledsoe.

“June 19th is intended to celebrate freedom, but you don’t want to give freedom to individuals when you continue to suppress vote. It’s a hollow celebration,” he added.

The debate over teaching slavery in schools

When Pulitzer Prize-winning historian and Harvard law school professor Annette Gordon-Reed was growing up in Texas, slavery wasn’t a topic teachers were equipped to discuss.

“When slavery in Texas was mentioned, it was presented as an unfortunate event that was to be acknowledged but quickly passed over,” Gordon-Reed writes in her book “On Juneteenth.”

Gordon-Reed also doesn’t remember learning about Juneteenth in school but “there should have been some discussion of it,” she said in interview with USA TODAY.

“I understand the real fears that people have that Juneteenth will go the way of  Memorial Day, where people forget that this holiday has its roots in a Black community, ” said Niambi Carter, associate professor of political science at Howard University.

Critical race theory, a legal theory that explores the way slavery and racism continue to impact American society, is now a controversial topic of debate. State legislatures are passing laws that discourage schools from teaching on race and equity.

Florida has banned its public schools from teaching critical race theory, as well as the New York Times’ “1619 Project,” which reframes history through the lens of slavery.

This month, Texas Gov. Greg Abbott signed into law the “1836 Project,” which aims to promote “patriotic education” when it comes to Texas history. The project is named for the year that Texas seceded from Mexico.

A demonstrator waves an American flag with the words "Not Free" painted on it in front of the Washington Monument during a Juneteenth march and rally in Washington, DC, on June 19, 2020. (Photo: ANDREW CABALLERO-REYNOLDS, AFP via Getty Images)

Critics are concerned the project will whitewash history by ignoring the legacy of slavery.

“Talking about Juneteenth is a way to drive the history home that there was slavery. You had to have Juneteenth because of the way African American people were treated; at this time they were seen as chattel,” said Gordon-Reed. “I certainly wish these efforts were not going on, but this is a way of being adamant about the institution of slavery and the role that it played in the development of Texas and in where we are now.”

For Carter, Juneteenth is about remembering enslaved African Americans’ freedom and struggles to rebuild their lives amid societal hostility to Black progress.