Yashar Ali, a prominent journalist, posted an article late Monday claiming that one of Los Angeles Mayor Eric Garcetti’s top advisers “forcibly kissed” him over the span of a decade and cited sources that described the mayor as an ambitious politician willing to overlook these alleged encounters.

He wrote that from 2005 through 2015, Rick Jacobs, the adviser, would forcibly kiss him on the lips at various events. Ali said he used to work in politics and considered Jacobs a friend at the time. He said that these incidents would happen in front of others.

“Jacobs would grab my face and kiss me on the lips — always twice — and he would turn to other people who witnessed it and say, “He has the softest lips,’” Ali wrote.

The writer pointed to a lawsuit from a Los Angeles police officer who once served as part of Garcetti’s protection detail in October 2013. Matthew Garza, a 23-year-veteran, claimed that Jacobs would hug him without consent and make unprofessional remarks like: "you’re so strong and handsome," "your muscles are so tight" and "I love me my strong LAPD officers." 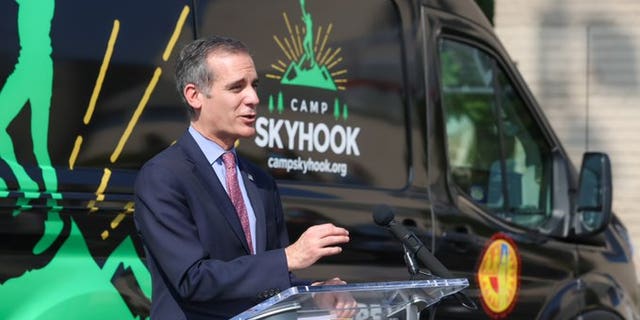 OCT. 19: Los Angeles Mayor Eric Garcetti has been criticized over his handling of allegations leveled against a former adviser.

The complaint claimed Jacob's behavior was "silently condoned by the Mayor and City of Los Angeles" and spanned several years. The suit said Garcetti "took no action to stop the comments from being made or even identify the comments as being inappropriate."

The Los Angeles Times reported that the suit also alleged that Garcetti would, on some occasions, “laugh at Jacobs’ crude comments.”

A spokesperson for Garcetti's office at the time disputed Garza's accounts.

"The Mayor has zero tolerance for sexual harassment and unequivocally did not witness the behavior that Officer Garza alleges," a statement to Fox News said at the time.

Jacobs also responded in July to the allegations in an email to the Times, “This lawsuit is a work of pure fiction, and is out of left field. Officer Garza and I worked together for many years without incident. I will vigorously defend myself, my character and my reputation.”

“I never want to put myself in the middle of a story, but in this case, I’ve been left with no choice. Several prominent news outlets have slow-walked this story. I also ethically can’t report out this news without revealing that I have been a victim of Jacobs’ misconduct as well,” Ali wrote.