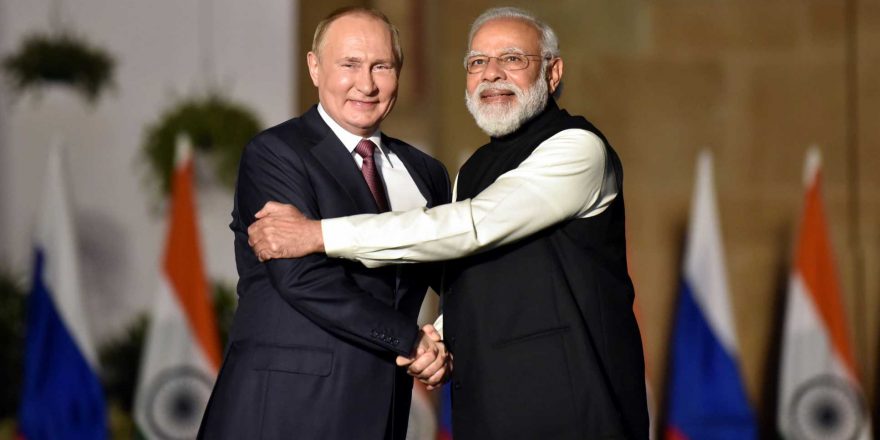 India and Russia on Monday signed more than two dozens deals across a variety of sectors and inked a 10-year defense cooperation pact.

"The diversity of agreements and [memorandum of understandings] signed today shows the multi-faceted nature of our bilateral partnership," India's Foreign Secretary Harsh Vardhan Shringla said Monday at a press briefing. The deals cover a wide range of areas including trade, energy, science and technology, education and intellectual property.

"India and Russia have also signed a program of cooperation in the field of defense for the next ten years, 2021 to 2031," he added.

The two countries have also set a target for $30 billion in trade and $50 billion in investment by 2025.

Putin's visit to India comes at a time when Russia's relationship with the United States remains strained.

For his part, Modi met U.S. President Joe Biden in September and attended the first in-person Quad Leaders Summit hosted by Biden. The United States considers India as a key ally in the Asia-Pacific to counter China's growing influence in the region.

Monday's meeting between Modi and Putin demonstrated that India wants to keep its options open, according to Richard Rossow, the Wadhwani chair in U.S.-India policy studies at the Center for Strategic and International Studies.

"India's concerned about the reliability of the United States as a partner, not just in defense space, but we have been raising concerns about religious tolerance and things in India," Rossow told CNBC's "Squawk Box Asia" on Tuesday.

"While I think they have a majority of their eggs in the United States' basket, if you look all around — but on defense at least, where they need strategic technology — they want to make sure they keep options open," he said. Moscow, on the other hand, wants to ensure that no one country, including China, has hegemony across Asia, Rossow explained.

"So, I think both have a overriding strategic interest, irrespective of the relationship with the United States and others," he added.

In a joint-statement on Monday, India and Russia said they intend to "upgrade the defence cooperation, including facilitating joint development and production of military equipment, components and spare parts, enhancing the after-sales service system, progress towards mutual recognition of quality control and regular joint exercises of the Armed Forces of the two countries."

Russia is still one of India's largest arms suppliers. Around 23% of Russian arms exports between 2016 and 2020 went to the South Asian country, according to a report from the Stockholm International Peace Research Institute.

Foreign Secretary Shringla said Monday that Russia has started delivering its long-range S-400 surface-to-air missile defense systems to India, based on a deal the two countries signed in 2018.

"Supplies have begun this month and will continue to happen," he said, adding, "It is important to note that, whether it is us or Russia, we conduct an independent foreign policy and I don't think we need to look at our relationship in the light of any other relationship that is there."

But this partnership could potentially lead to sanctions from the United States under a 2017 law aimed at dissuading allies from purchasing Russian arms. Last year, Washington sanctioned Turkey for its purchase of the S-400 missile system.

CSIS' Rossow said that the extent of India and Russia's military cooperation is limited by the lack of areas where they have shared interests.

"I think that over the next 10 years, you'll see some nominal exercises, you'll see continued defense sales, maybe some areas of other kind of technology cooperation. But the real depth of the relationship, the practicality on the ground, is still going to be very limited because they don't have a lot of theaters where they have shared interests," he told CNBC.

In recent years, India has stepped up its purchases of military equipment from the United States, but a majority of its defense inventory is still of Russian origin.

Last year, the U.S. signed a deal with India that would allow New Delhi to access U.S. satellite data crucial for targeting missiles and other military assets.