President Donald Trump joined Indian Prime Minister Narendra Modi at a rally on Sunday called ” Howdy, Modi!” in which both leaders held hands and touted their strong friendship to an audience of tens of thousands of people.

The community summit hosted by the Texas India Forum was a rare mass display for a foreign leader.Organizers said over 50,000 attendees registered for the event held at the NRG Stadium in Houston, and predicted it would be one of the largest gatherings for a foreign head of state visiting the US.

“Mr. President, this morning in Houston you can hear the heartbeat of this great partnership in the celebration of two of the world’s largest democracies,” he said to Trump, calling the meeting ” history in the making.”

Modi and Trump walked hand-in-hand and touted their strong friendship. Modi said Trump was a “true friend” to India, and described the US president as “warm, friendly, accessible, energetic and full of wit.” 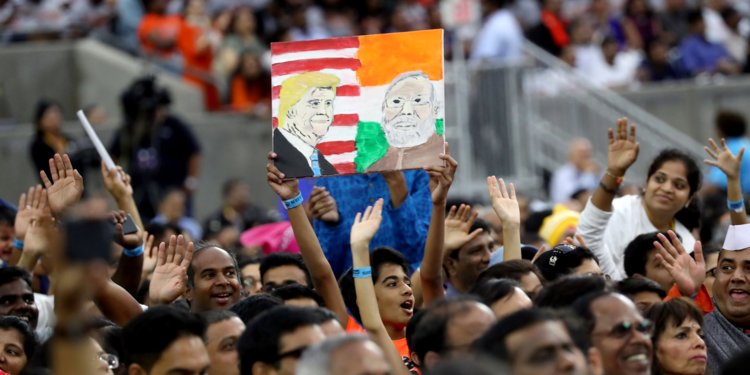 Trump also praised Modi, calling him “one of America’s greatest, most devoted, and most loyal friends.” He also endorsed his own immigration policies, comparing tightening security at the US-Mexico border to India’s security concerns with its neighbor, Pakistan.

“We are taking unprecedented action to secure our southern border and stop illegal immigration,” Trump said of his border security plan, an important campaign issue in Texas.

“Both India and US also understand that to keep our communities safe, we must protect our borders,” he added.

Modi has emerged as one of themost powerful politicians in India’s history after his Hindu nationalist Bharatiya Janata Party won a landslide victory in May.

Modi’s visit and piling of praise onto Trump during the rally is beingseen by observers as a clear-cut endorsement of the president as he prepares his 2020 reelection campaign. Modi, too, may have been looking to drum up US support amid criticism of his policies in Kashmir, after herevoked the region’s special status last month and has left residents in a near-total communication shutdown.

The Indian government appears to have recently taken a page out of Trump’s playbook,repeatedly accusing the media of reporting “fake news” on its treatment of civilians in Kashmir.

Reports indicate that local security forces haveshot at people with pellet guns andvillagers say they’ve been beaten with sticks, hung upside down, and even electrocuted by Indian army officers.