Home » How Marjorie Taylor Green became the Voldemort of Congress. Few lawmakers even want to say her name. 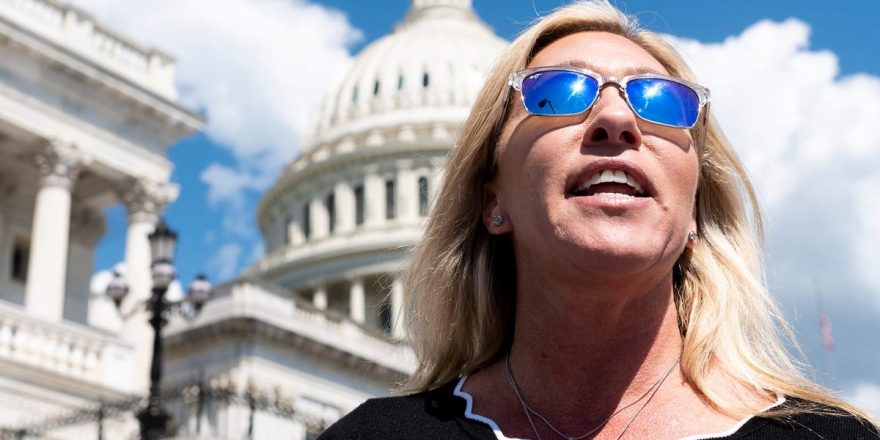 How Marjorie Taylor Green became the Voldemort of Congress. Few lawmakers even want to say her name.

In just four months, the firebrand Georgia Republican has established herself as something of a Voldemort on Capitol Hill. Mention her, and she gets only stronger. Ignore her, and pray that bad things don’t happen.

Indeed, House members recently interviewed by Insider said they were sick of answering questions about one of their newest colleagues. Many said they were relieved they didn’t have to work with her after the House’s mostly party-line vote in February stripped her of assignments on the House Budget and Education and Labor committees.

“I don’t understand what she’s doing. I really don’t. I’m glad I don’t have to interact with her, and I don’t waste any time thinking about her,” Rep. Pramila Jayapal, a Democrat of Washington, said.

Greene only burnished her reputation as a Capitol Hill rabble-rouser  after she aggressively confronted Rep. Alexandria Ocasio-Cortez just off the House floor Wednesday afternoon and was overheard by reporters berating the New York Democrat for pursuing “radical socialism.”

Even some of Greene’s GOP colleagues shied away from answering questions about that interaction. For their part, Democrats sounded like they were flabbergasted.

“I was relieved before this,” Rep. John Yarmuth, who as chairman of the House Budget Committee would have had to work with Greene had she not lost her work assignments, told Insider. “As far as I can tell, she’s here for all the wrong reasons. She is here just to make a show of herself. She’s here for the theater.”

Rep. Adam Kinzinger of Illinois was one of 11 Republicans to vote Greene off her committees. He criticized her latest outburst against Ocasio-Cortez on Twitter, saying: “Some just want attention or cannot handle their emotions.” 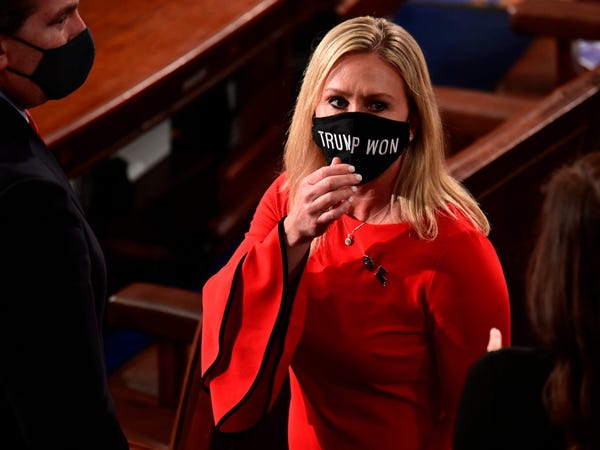 ‘My Republican colleagues have told me they’re jealous’

That hasn’t stopped her from trying to influence policy in America. Greene has introduced 11 bills in the House, according to Congress.gov, including a bill to reduce the $434,312 salary of Anthony Fauci, a longtime civil servant who clashed with President Donald Trump during the coronavirus pandemic. Another bill would ban discrimination against people who don’t get their coronavirus shots, and a third would impeach President Joe Biden.

Greene told Insider in an interview that she didn’t think there was anything lost when it came to being kicked off committees.

“Republicans, their voices aren’t even heard on committees right now,” she said. “The Democrats have full control and don’t care about amendments Republicans are adding. Most of my Republican colleagues have told me they’re jealous that they didn’t get kicked off committees because they’re wasting time sitting on Zoom meetings.”

Last week’s confrontation with Ocasio-Cortez was just the latest in a string of controversies involving Greene, 46, a far-right firebrand who had never held political office before winning election in January to represent a rural Northwest Georgia district. On Friday, CNN posted a video from two years ago of then-activist Greene taunting Ocasio-Cortez outside her office.

“This is a woman that’s deeply unwell and clearly needs some help,” Ocasio-Cortez told reporters Friday. “Her kind of fixation has lasted for several years now. You know, it’s at this point, I think, the depth of that unwellness has raised concerns for other members as well.”

The committee-removal vote came after Greene’s social-media history came to light, including the promotion of debunked far-right conspiracy theories and endorsement of political violence. Greene said at the time that her past statements did not represent her and that she was a “very regular American.”

But she still continues to deny the validity of the 2020 presidential-election outcome and launched a Trump-supporting national “America First Tour” with Rep. Matt Gaetz, a Republican of Florida who is facing a Justice Department investigation over allegations of sex trafficking.

Greene also is doubling down on her confrontation with Ocasio-Cortez. In a Facebook video posted Wednesday, she described the Democrat and her progressive House allies as “The Jihad Squad,” and on Thursday, she told reporters that Ocasio-Cortez should agree to debate her about the Green New Deal, a progressive bill intended to address the climate crisis.

“I would think everyone should be asking her why she can’t defend her policy,” Greene said, accusing Ocasio-Cortez of acting “like a child.”

Some Democrats think further discipline is necessary. During her weekly press conference, House Speaker Nancy Pelosi referred to Greene’s confrontation as a “verbal assault” and “abuse” against Ocasio-Cortez and said the House Ethics Committee might need to take up the matter.

“This is beneath the dignity of a person serving in the Congress of the United States and is a cause for trauma and fear among members, especially on the heels of an insurrection,” she said.

Some lawmakers are pushing Congress to go even further. Rep. Jimmy Gomez, a Democrat of California, wore a mask in the Capitol on Thursday that read, “EXPEL MTG.” 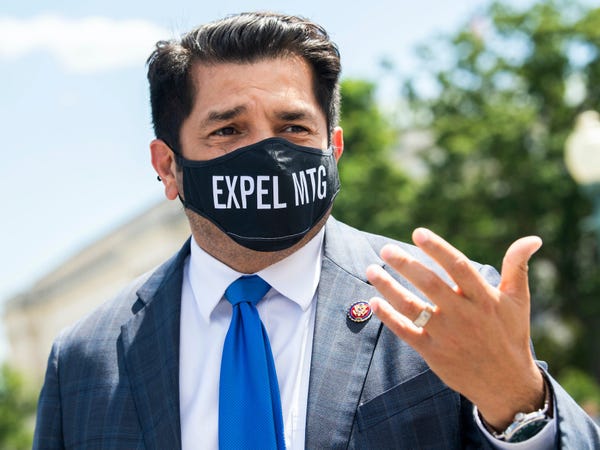 ‘Not a follow-the-leader type of person’

The newfound notoriety hasn’t been all bad for Greene. It helped her rake in $3.2 million in fundraising during the first quarter of this year, a haul second only to Pelosi.

“That shows that people think I’m doing a good job for them,” Greene, whose Georgia district is largely low income and rural, told Insider on Wednesday.

Some Republicans were hesitant to discuss the latest incident involving Greene and Ocasio-Cortez. Rep. Michael Burgess, a Republican of Texas, told Insider he had not seen any news articles about it.

When asked about what he thought of not being able to work with Greene on the House Education and Labor Committee, Rep. Madison Cawthorn, a Republican of North Carolina, said this week that he did not take questions from reporters in the halls of Capitol Hill.

Insider caught up with him again outside the Capitol one day later, when he clarified he “almost always” didn’t take hallway interviews. Asked whether, in that case, he wanted to defend Greene, he turned around and headed away from the Capitol. He then said over his shoulder, “That was a really good try, though.”

Greene does have her defenders. Rep. Ted Budd, a Republican from North Carolina, told Insider she “has been nothing but kind to me” and that he thought stripping her of her committee assignments was unfair.

“It’s very unfair to judge her in this Congress for things she did before she was even elected,” he said. “I think that’s pure partisan.”

He and six other Republicans appeared alongside Greene at an event last week criticizing the teaching of critical race theory in public schools. The outdoor event took place just hours before the confrontation with Ocasio-Cortez inside the Capitol, and Budd said he heard about it but hadn’t looked into it.

Rep. Glenn Grothman, a Republican from Wisconsin, would have worked with Greene on both her House committees had she not been removed from them. He told Insider he thought it was good for members to be unafraid of leadership and special interests and compared Greene to Trump.

“There has always been a lack of free spirits in Congress,” Grothman said. “And if a free spirit gets in here who is not afraid of leadership or the special interests — you might not agree with her on individual issues, but it’s always good for the institution.”

He added: “Everybody follows the leader. Marjorie is not a follow-the-leader type of person.”