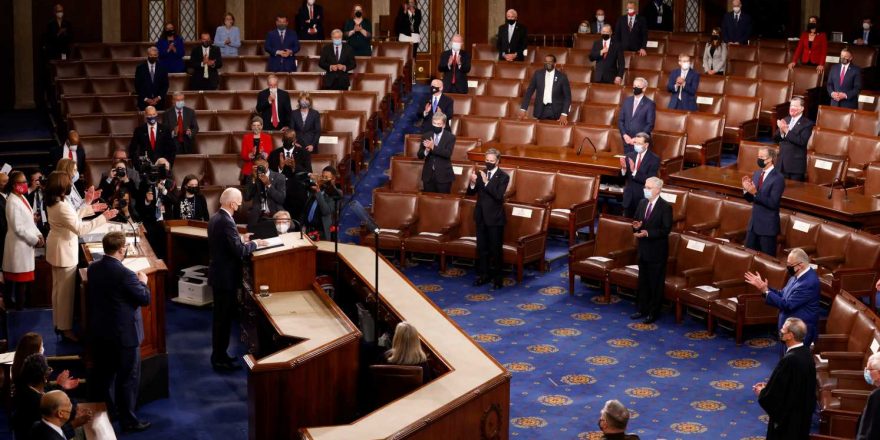 When President Joe Biden makes his first address to the joint session of Congress on Wednesday, it will look a lot different than speeches made by his predecessors.

The address, which technically is not called the State of the Union, will be the first time a U.S. president speaks to both houses of Congress since the beginning of the COVID-19 pandemic, as former President Donald Trump delivered his last State of the Union on Feb. 4, 2020.

COVID-19 precautions are the main reason why Biden’s speech will come near his 100th day in office after receiving the invitation to do so from Speaker of the House Nancy Pelosi on April 13. It will be the first time a president will do the annual address in the month of April and the latest in the year since former President Calvin Coolidge in December 1923.

Social distancing guidelines mean only 200 people will be allowed in the House chambers instead of the 1,400 people allowed in past years. Five guests will be invited virtually, breaking the tradition of people sitting alongside the first lady in her viewing box. Six guests were invited by the Trumps in 2017 and 11 in 2020.

All people inside the chamber will be required to wear masks, and Biden will be masked as he makes the traditional walk down the center aisle to the rostrum but will take his mask off during his speech.

History will be made once Biden begins his speech as he will have two women behind him —  Pelosi and Vice President Kamala Harris. Pelosi became the first woman to sit behind the podium in 2007 during former President George W. Bush’s address.

In wake of the attack on the Capitol on Jan. 6, Biden’s address has been designated a National Special Security Event, meaning the Secret Service will oversee much of the planning. The Department of Defense, U.S. Capitol Police and other area law enforcement will also provide security to the event.

Military personal and Capitol Hill Police department stage outside the US Capitol before U.S. President Joe Biden will address a joint session of Congress in the House chamber of the U.S. Capitol. (Photo: Tasos Katopodis, Getty Images)

Since some members of Congress and the Supreme Court will not be present or seated in the House gallery for the address, there will be no “designated survivor” assigned for the event.

Done in the event a major catastrophe kills the people in the House chambers, former Interior Secretary David Bernhardt was assigned the role in 2020.