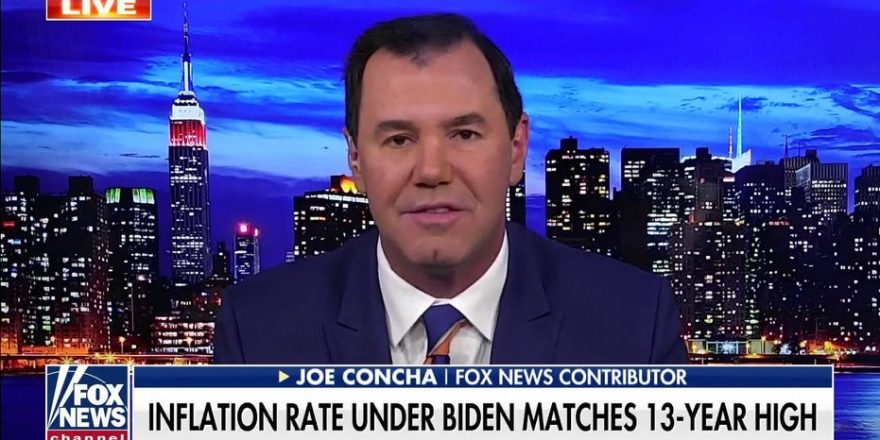 Fox News contributor Joe Concha called out Biden for evading the media, arguing the ‘optics’ around the situation ‘look cowardly.’

The letter, which is signed by all of the Republican members of the House Oversight Committee, said the disruptions in the supply chains were supposed to be “temporary,” but noted that “labor shortages and growing backlogs” were making it more likely that these issues would continue into 2022, delaying a long list of necessary goods for Americans.

“Meanwhile, the Biden Administration appears unwilling to recognize the growing supply chain crisis,” the letter reads. “Instead, the Vice President is advising parents to buy Christmas gifts early—something much easier for those workers not awaiting a Christmas bonus—and blaming climate change.”

The House Oversight Republicans said that over the course of less than three weeks the number of container ships anchored off the coast of California climbed from 40 on Sept. 1 to a “record-breaking” 73 ships days later, adding that some of the “vessels” have been sitting for more than two weeks compared to a 3.5 days average pre-pandemic. The letter said that trains were facing massive backups and delays as well, including a Chicago railyard that was backed up for 25 miles.

“The delays at ports, railyards, and warehouses stem directly from extreme labor shortages, caused in large part by the Biden Administration’s and congressional Democrats’ misguided policy to pay people not to work,” the letter said. “Further, President Biden’s unilateral vaccine mandate will likely worsen the situation as employers are forced to terminate employees unwilling to be vaccinated.”

The House Oversight Republicans then asked whether the supply chain crisis was “acceptable” to the Biden administration, reiterating the worsening conditions.

“It must be acceptable, because the Biden Administration has shown little interest in helping the American people. Rather, it appears more interested in growing the federal government’s power and reach, from spending trillions in taxpayer dollars to pushing vaccine mandates,” the letter continued. “If we pass the Democrat’s proposed $3.5 trillion spending bill which raises taxes across the board, the cost of living for every American will increase. Between inflation and the new taxes in the bill, there will be no prosperity, but may be this is the intent of the Biden Administration.”

The letter concluded by requesting a “staff level briefing” no later than Oct. 26 to “better understand the Biden Administration’s approach to solving the supply chain crisis.”

Biden tapped Porcari as the port envoy to his White House Supply Chain Disruptions Task Force back in August. He previously served as the deputy secretary of the Transportation Department during the Obama administration.

On Wednesday, Biden praised his supply chain disruption team for their “leadership,” despite White House press secretary Jen Psaki admitting that the administration could not guarantee Christmas presents would arrive on time in December.

“I especially want to thank Joe Porcari, and I think Joe’s done one heck of a job, my special envoy specifically on ports, who’s been working this issue with all the stakeholders for the past several weeks,” Biden said Wednesday, singling out Porcari and calling him by the incorrect first name twice.