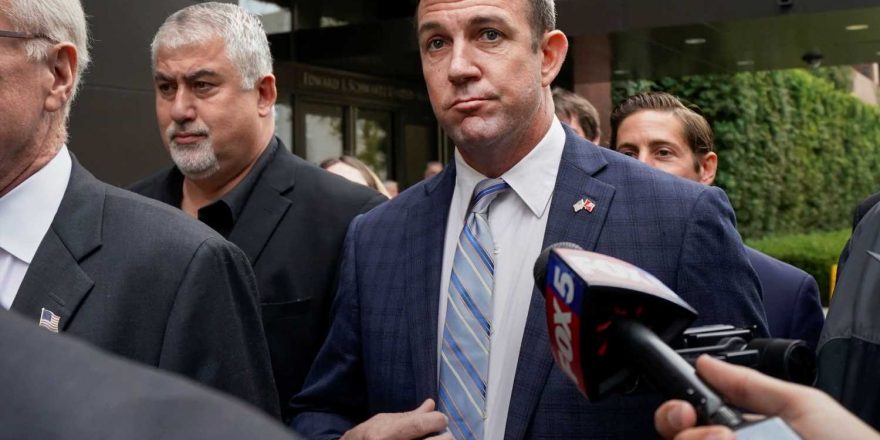 Individuals making small contributions — the kind of donors candidates love to talk about at campaign rallies — transformed the political landscape in 2020.

Small donors, those giving $200 or less to a candidate, accounted for a whopping $1.8 billion in federal campaign contributions by the weeks leading up to last fall's elections, according to a joint analysis by the Center for Responsive Politics and the National Institute of Money in Politics.

That is more than three times the amount they gave in the 2016 cycle, and it accounted for 27% of the total raised from all sources. That doesn't include the flood of individual donations to parties and political action committees.

But how many of those contributors did any due diligence before clicking on the "donate" button, to make sure their hard-earned money was actually going toward legitimate campaign expenses?

After all, tales of politicians misusing campaign funds are legion, and practically as old as politics itself.

Former Rep. Duncan Hunter, R-Calif., is a prime example. The Marine Corps veteran was a prodigious fundraiser, but large amounts of the money he raised did not go toward advancing the conservative causes he campaigned for.

Instead, they went toward everything from lavish vacations to groceries. And it helped Hunter pay for multiple extramarital affairs.

In 2019, Hunter and his estranged wife, Margaret, each pleaded guilty to charges that they conspired to steal more than $150,000 in campaign funds, in what prosecutors described as "a deliberate, years-long violation of the law."

"It would be so simple to say, in this case, that the victims were the campaign supporters who gave him money expecting it would be used only for the campaign, but that's only part of the story," former Assistant U.S. Attorney Phil Halpern told CNBC's "American Greed."  "The true victims include every single person that he represents in San Diego and Riverside Counties."

Last December, just weeks before Hunter was scheduled to begin an 11-month prison sentence, then-President Donald Trump pardoned the ex-congressman and his wife. That allows Hunter to move on with his life, collect a congressional pension, and even potentially run for office again. But there is no mechanism for donors who feel they were cheated to get any of their money back.

Robert Maguire, research director at the watchdog group Citizens for Responsibility and Ethics in Washington, said that while it is important for people to be able to take part in the political process and support the candidate or party of their choice, the Hunter case should be a cautionary tale.

"Some of these campaigns and committees have gotten really good at making emotional appeals that apply to donors' preexisting political beliefs," Maguire told "American Greed." "Sometimes that can sort of short circuit the part of your brain that says, 'Wait, I should be doing a little research before I give this money'."

Federal campaign finance laws require detailed disclosures by candidates and campaign committees about the money they collect and spend. All of the information is posted online at the Federal Election Commission website.

"FEC data is generally quite good," Maguire said. "It can be kind of daunting at first to dig into, but there's a lot of useful information in there for donors who want to hold the committees they're giving to accountable."

Clicking on the "Campaign Finance Data" link allows you to search not only who is contributing to your candidate, but also where the campaign is spending the money.

The raw FEC data can be cumbersome to get through, so you can also check out OpenSecrets.org, operated by Center for Responsive Politics. The site synthesizes the data and adds nonpartisan context.

Such payments are not necessarily illegal as long as they are reported to the FEC. For example, a candidate can use campaign funds to make charitable donations as long as he or she does not personally benefit. Funds can be used to pay for gifts if the recipient is not a member of the candidate's immediate family. The candidate can even collect a salary from their campaign committee under certain conditions.

But just because the payments might technically be legal does not mean you should not scrutinize them.

"Ask questions about it," Maguire said. "You can also flag them for your local reporter in the candidate's district, and just say, 'Hey, I don't know much about this. This looks strange.' And that can help you get to the bottom of it."

The Hunters stretched the loopholes in campaign finance law beyond their limits, even setting themselves up with credit cards that allowed them to tap into campaign funds at will, with practically no questions asked.

In the month of December 2010 alone, a month after Hunter was easily reelected to a second term, FEC records show nearly $2,500 in "travel, meals and lodging" billed to the campaign credit card.

"Almost instantly from getting that campaign credit card, it was a license to steal," Halpern said.

In other cases, a big red flag to look for is large payments to consulting firms. Practically all candidates use consultants, so the expenditures may be perfectly legitimate. But Maguire said consultant payments can also be a way to launder contributions for a candidate or committee's illegitimate use. He said it is another loophole in the law.

"Subcontractors don't have to be reported," he said. "And so there could be these large lump-sum payments to consulting firms, or even things that appear to be shell corporations or something like that, that could be sort of a catch-all for a large number of expenditures."

If you see frequent payments to a consultant or another outside entity in the FEC data, try to research that firm as well, or ask the campaign about it, Maguire said.

"Is this just a way for them to raise a bunch of money from people who care about a particular issue and then basically put it right back in their pockets?"

Similar rules apply if you are considering a donation to a political party or a political action committee. Maguire said a committee's website alone can offer some useful clues.

"Are there actual human beings listed on the website? Is there contact information? Does this look like an operation that actually employs people, and they come to work there every day?"

If the website lists a physical address, Google it to make sure it is not just a mail drop.

"If it pops up as a UPS store, you know, that's kind of a red flag," Maguire said.

The FEC, an independent agency that was the centerpiece of post-Watergate campaign finance reforms in the 1970s, has never managed to live up to expectations.

In recent years, it has been hobbled by a lack of funding. The agency notes in its latest request for a 7% budget increase in fiscal 2022 that its operating budget appropriated by Congress has been essentially flat since 2016.

More crucially, the commission has occasionally suffered from a lack of members. During much of the 2020 campaign season, the commission could not even meet because resignations and a lack of presidential appointments left it short of a quorum.

Even when it is at full strength, the six-member commission — no more than three members can be from the same party — frequently deadlocks, unable to agree on enforcement actions.

"Some of the largest and most consequential cases are just stymied either by dysfunction or by an inability to get the commissioners to agree on facts," Maguire said.

In many ways, that leaves it up to you as a donor to hold your candidate accountable.

"If you are thinking of giving to a campaign or to a political committee, you should do some homework first," Maguire said.

See how a congressman and his wife used campaign cash to fund their lavish lifestyle — and how they got away with it. Catch an ALL NEW episode of "American Greed," Monday, June 14 at 10 p.m. ET/PT only on CNBC.